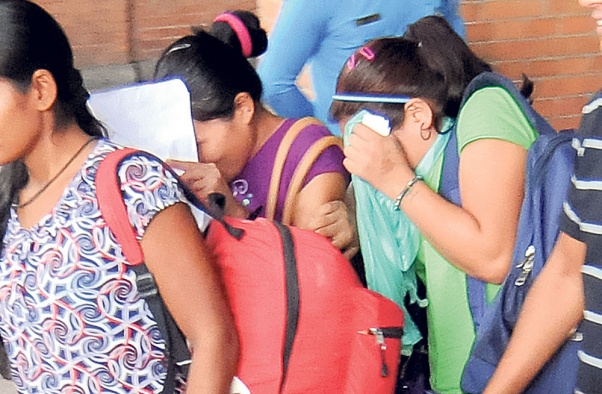 RANJHA, Feb 25: Nineteen Nepali women who were being taken towards India probably for trafficking were rescued from the Nepalgunj border.

According to Area Police Office Jamunaha in charge Sub Inspector of Police Basant Basnet, the women were stopped at Jamaunaha transit point on the border as they were travelling on bus en route to Delhi from Nepalgunj.

Ten women were rescued on Friday night and remaining were rescued the following night. If any dubious circumstances is noticed in course of traffic check, police inquire with travelers and passengers aspiring to cross the border. Such works are going on with the collaboration of Maiti Nepal and Tiny Hand, Nepal.

Some women in the groups said before the security that they were heading to the Gulf countries and Iraq. Those women are from Morang, Nuwakot, Dhading, Makwanpur, Chitwan and Gulmi districts. Following the rescue, they have been kept at the Maiti Nepal's Nepalgunj-based offices. Efforts are on to reunite them with their families after counseling, Maiti Nepal's Nepalgunj coordinator Keshab Raj Koirala said. "Reality is gradually coming out from the rescued," he said.

Human traffickers have been (mis)using the Jamunaha point from several ways for their illegal business.
They might have been taking advantages from the operation of direct bus service to Delhi from here.

Shopping at the Indian market Rupaidiha along the Nepal-India border, medical treatment, and outing were the most cited reasons by traffickers and middlepersons who also cajoled their prey to cite the same in attempts to cross the border. But now they have been using the direct bus service to make the business.

Each day, three Nepal-India friendship buses from Butwal, Dang and Nepalgunj enter Delhi via the Nepalgunj point. More number of women are being found travelling on such buses under dubious conditions, prompting the security and anti-human trafficking organisaitons here to increase surveillance, said SI Basnet.

On the initiations of Maiti Nepal working against the trafficking in girls and women, 920 possible 'victims' of trafficking were rescued from the Jamunaha point in 2018.

Nepal got rid of load-shedding not only due to Ghising’s sole efforts: Minister Gyawali
21 minutes ago