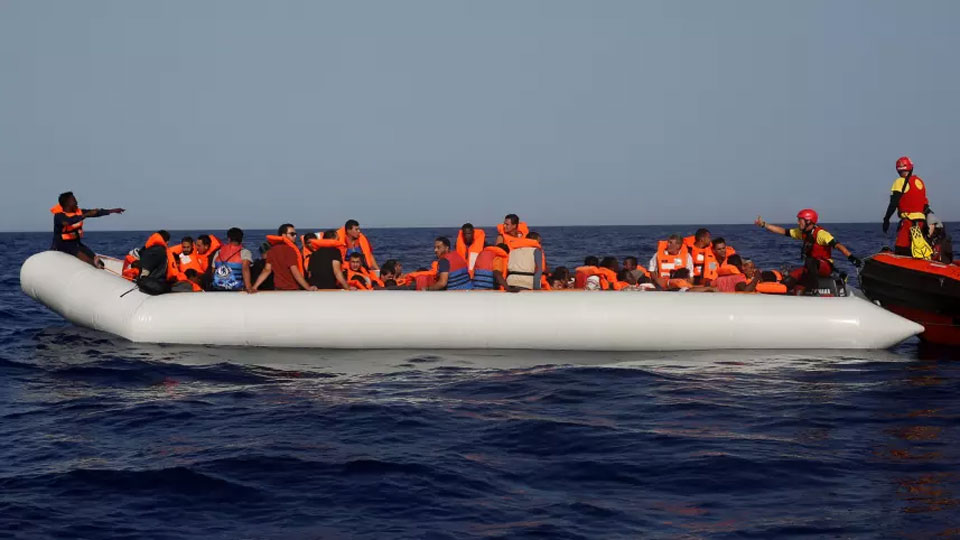 An Open Arms lifeguard gives a thumbs-up to a migrant at the other end of a rubber boat in the Mediterranean Sea, June 30, 2018Renata Brito/AP

A boat carrying as many as 150 people has capsized off the northern coast of Cyprus, a Turkish Cypriot official has stated

Nineteen people drowned when a boat loaded with as many as 150 people who were thought to be migrants capsized off the northern coast of Cyprus, a Turkish Cypriot official said Wednesday.

Tolga Atakan, the transport minister in the breakaway north of ethnically divided Cyprus, told The Associated Press that rescue crews were searching for 25 missing passengers in an area where a passing cargo ship reported spotting people in the water.

The Turkish coast guard said it rescued 103 of the capsized vessel's passengers and took them to Turkey. One seriously injured person was being treated at a hospital in the northern part of Cyprus' capital, Nicosia, Atakan said.

Atakan said the nationalities of the passengers have not been confirmed. When asked if they were thought to be migrants, Atakan said "most probably."

Aysegul Baybars, the interior minister in northern Cyprus, told Turkey's CNN-Turk television that authorities were investigating if bad weather, sabotage or other factors caused the sinking.

She said authorities don't know where the vessel has set sail from or where it was heading.

The capsizing occurred around 16 miles (26 kilometers) north of Cyprus' Karpas Peninsula, but it's not yet clear when.

Thousands of Europe-bound migrants have attempted to cross the Mediterranean Sea from North Africa this year, a dangerous journey often made in overcrowded and inadequate vessels procured by human smugglers.

The International Organization for Migration said before the Cyprus wreck that 1,443 people died or went missing this year in the Mediterranean Sea route from northern Africa as of July 15.

Friction between the Italian government and private aid groups that patrol the sea to look for people in danger ratcheted up Wednesday when a Spanish aid organization shunned an Italian port for one in Spain.

Proactiva Open Arms said it found a survivor and two dead bodies from a migrant boat wreck on Tuesday, and accused Italy of complicity.

The Open Arms vessel was expected to arrive on Saturday in the port of Palma de Mallorca, said a Spanish government spokeswoman who was not authorized to be named in media reports.

The aid organization accused Libya's coast guard, which has received training from Italy and funding from the European Union, of abandoning the three people Monday when it took 158 other migrants from the boat and destroyed it.

But the aid group also aimed sharp criticism at Italian authorities, who initially granted the Open Arms permission to dock in the Sicilian port of Catania, according to Proactiva.

In a statement on Wednesday, the aid group said it did not trust how the Italian government would handle the investigation of Monday wreckage after Interior Minister Matteo Salvini referred to the group's account as "lies and insults."

The strongman in the new Italian populist government, Salvini has vowed to halt the flow of migrants across the Mediterranean, giving aid to Libyan authorities and vowing to close the country's ports to aid groups it accuses of helping human traffickers by picking up migrants and bringing them to Europe.

Proactiva reported that a woman and a young boy were dead by the time private rescuers found them Tuesday morning in waters some 80 miles off the Libyan coast. Rescuers also found a woman clinging to a piece of wood amid the remnants of a 10-meter-long inflatable boat.

Libya's coast guard denied on Tuesday having left anyone at sea and blamed any deaths at sea on human traffickers and the "presence of such irresponsible, non-governmental groups in the region."

In addition to accusing Libyan coast guards, Proactiva's director Oscar Camps said Italy was to blame for "enlisting assassins" to "kill and torture" those who try to cross the Mediterranean.

"The policies of Matteo Salvini are responsible for this crime," Camps said in a statement.

Salvini responded to the criticism in a tweet that rhetorically asked why the Open Arms vessel was shunning the Italian safe port offer.

"Could it be that they have something to hide?" he asked.

Humanitarian groups say the pressure being exerted on them by hostile governments is increasing the number of deaths at sea, despite a sharp drop in refugee and migrant arrivals in the European Union since 2015.

SEOUL, Dec 3:  At least 13 people were dead and two missing on Sunday after a South Korean fishing boat... Read More...