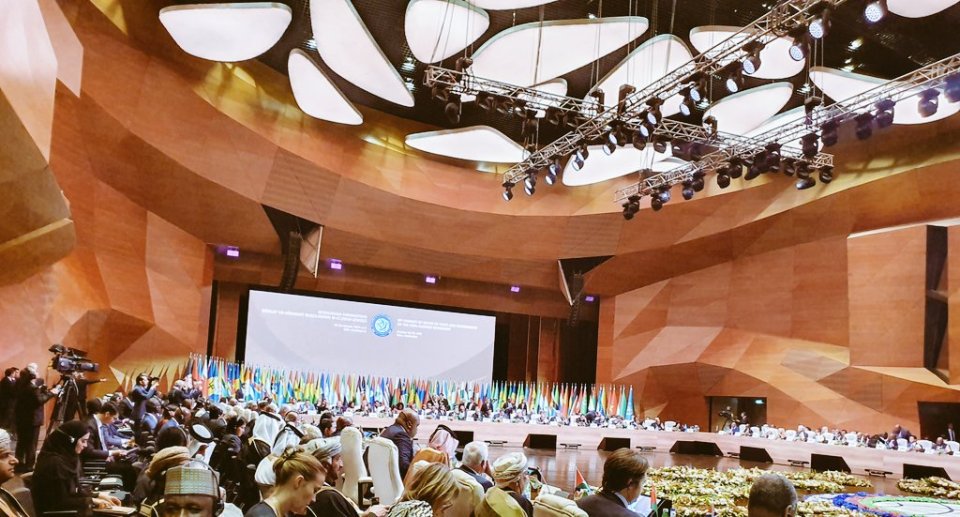 BAKU, AZERBAIJAN, Oct 26: The 18th Summit of Heads of State and Government of the Non-Aligned Movement (NAM) concluded here this afternoon issuing the Baku Declaration with the resolve to increase the effectiveness of the Movement by making it a dynamic and effective mechanism to represent, coordinate and support the interests and priorities of all of its Member States.

The NAM member states have also decided to activate the role of the Movement for making it adequate to new realities in the current geopolitical landscape by promoting and upholding its founding principles which continue to be as much valid and relevant as originally conceived.

It may be noted that under the theme “Upholding the Bandung Principles to ensure concerted and adequate response to the challenges of contemporary world”, the 18th NAM Summit decided that the member states would remain united and steadfast within the Movement in view of the emerging threats and challenges to international peace, security and development.

The two-day 18th Summit of Heads of State and Government of the Non-Aligned Movement was held at the Baku Congress Centre in Baku, the capital of the Republic of Azerbaijan from October 25 to 26. Heads of State and Government from 30 member states and delegates including Vice-presidents, Deputy Prime Minister and foreign ministers from all the 120 member countries and representatives from 17 observer countries and 10 observer organisations attended the summit.

After adopting the Outcome Document of the NAM Baku Summit, the member-states also declared that the effective implementation of the NAM Baku Summit Outcome Document and the documents of the previous NAM Summits and Ministerial Meetings requires the highest commitment and determination of all NAM Member States. This, they said, would only decisively address the challenges posed in the areas of peace, economic and social development, human rights and international cooperation.

The NAM Member States have also decided to consolidate their positions in order to advance the interests of the developing world, build a fair, inclusive, transparent and effective system of global governance. “The member states shall support multilateralism with the United Nations at its core and give a boost to the central role of the United Nations in the institutional and legal framework of global governance,” reads the Declaration.

In this regard, the member states have decided to call for further strengthening and modernizing of the United Nations, revitalizing the UN General Assembly and strengthening its authority as the most democratic, accountable, universal and representative body of the Organization, including in the area of international peace and security.

“All States shall respect the territorial integrity, sovereignty, the sovereign equality, political independence and inviolability of international borders of other States, comply with the principles of non-intervention in the internal affairs”, reads the Declaration while noting that any attempt aimed at partial or total disruption of the national unity or territorial integrity of States shall be continued to be opposed.

The states also decided to strengthen NAM solidarity in combating terrorism in all its forms and manifestations while stressing that terrorism should not be associated with any religion, nationality, civilization or ethnic group. A decision was taken to observe the 2021 as the International Year of Peace and Trust and to continue to work towards the full implementation of the 2030 Agenda for Sustainable Development, leaving no one behind, remembering that the Agenda is universal and transformative, based on peoples’ needs and interest.

They have also reaffirmed the central importance of the development dimensions in trade negotiations and maintain that a successful conclusion of the Doha Development Round, launched in 2001, can only be achieved if the outcomes thereof significantly address the imbalances and inequities in the multilateral trading system, in which the interests of developing countries could be reflected.

The promulgation and application of unilateral coercive measures against Member States of the Movement was strongly condemned, while demanding the repeal of, such measures, which affect human rights and prevent the full economic and social development of the peoples subjected to them.

They also reaffirmed that climate change is one of the greatest challenges of present time and express profound alarm that emissions of greenhouse gases continue to raise globally. “We express concern about the increased adverse impacts of climate change, particularly on developing countries, which are severely undermining their efforts to eradicate poverty and achieve sustainable development.”

The NAM member states also urgently called for serious, collective efforts to bring a complete end to the Israeli occupation of the Palestinian territory occupied since 1967, including East Jerusalem, in accordance with and in full respect of international law. Reaffirming that the South-South Cooperation is an expression of solidarity and cooperation among the peoples and countries of the South, they stressed on ensuring the full enjoyment of all human rights, including the right to development so as to build collective and sustainable peace and prosperity across the world.

Furthermore in the Declaration, the NAM member states have reaffirmed and underscored the validity and relevance of the Movement's principled positions concerning the right to self-determination of peoples under foreign occupation and colonial or alien domination.

The summit also recognized the Member States’ primary responsibility to promote durable solutions for internally displaced persons in situations of armed conflict, including their voluntary return in safety and with dignity, as well as to ensure respect, protection and fulfillment of their human rights. Finally, the member states congratulated Ilham Aliyev, President of the Republic of Azerbaijan, for assuming the chairmanship of the Non-Aligned Movement and expressed appreciation to the Government and people of the Republic of Azerbaijan for hosting the 18th Summit of Heads of State and Government of the Non-Aligned Movement in a grand manner.

Who should avoid India’s COVID-19 vaccine?
23 hours ago

GOP to stay neutral should Trump run again
1 hour ago

Medics receiving shots of Covishield feel upbeat as they report no pain, allergies
2 hours ago