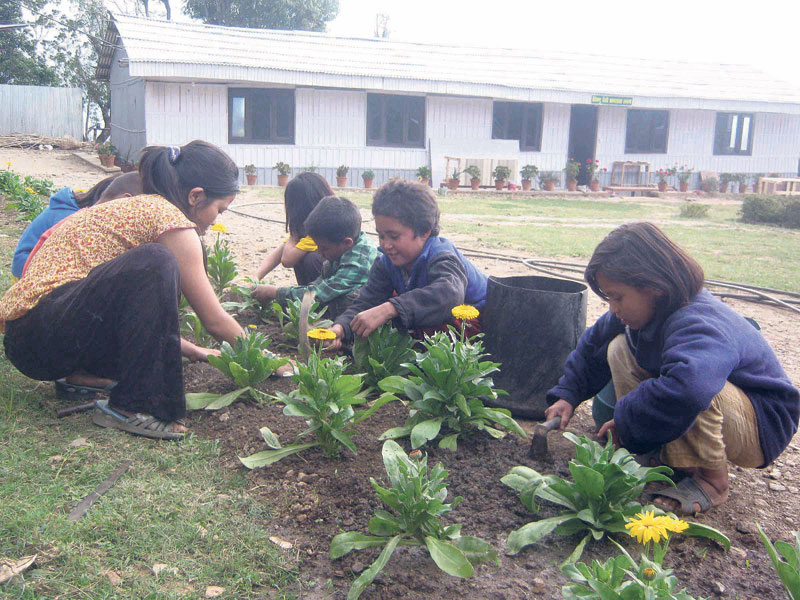 An exemplary school in Khotang gives emphasis to practical education

KHOTANG, April 27: Tek Bahadur Khati was passionately polishing a wooden table last week at a foundation which oversees his education. The boy from Likhu-2 was brought to the Jan Jagriti School, which is one of the schools run by Shubham Foundation, five years ago.

“This school is different. We have to work here,” said Khati.

Nirajan Shahi, 9, is another student looked after by the foundation. His uncle had got him here last year. Now he is in Grade two. The lad from a Khotang village is doing pretty good at his school. “I love it. We work in field. We do lots of works and its quite fun,” said Shahi.

Indi Bimal Oli, 11, from Salayn district is no less excited about the school. Computer classes, agricultural classes and other kinds of studies engage him. “It's great here,” said Oli, who along with other boys live at the school's hostel after school time.

The school has adopted a policy of giving preference to gardening tools over computer.

According to the school administration, there are 150 residential students with the foundation so far. The motto of the foundation is to make each student technically skilled as well as competent in other spheres. No wonder, a large number of students are seeking admission beyond the capacity of the foundation. Since the schools under the foundation give priority to students" interest and passion, both guardians and children are quite impressed by it.

“We study the child"s ability and interest first and then decide what to do with him/her next,” said Baburam Karki, a teacher with the foundation.

Students from Jhapa, Morang, Siraha, Sarlahi, Udayapur, Solukhumbu, Mahottari, Dhading, Kathmandu, Lalitpur, Kaski, Humla, Kalikot, Bajura, Rukum, Rolpa, Jumla, Salyan, Surkhet and Banke among other districts are enrolled with the foundation. Junior students are learning at Jana Jagriti and those of lower secondary level are at Saraswati Secondary School in Diktel. The schools, which were in existence since a long time, were taken over by the foundation and overhauled. Introduction of practical classes have attracted a large number of students, according to Karki.

“The students attend classes like any other child. The way of learning is the same but the burden is less. They are equally engaged in practical classes including agricultural, computer and other classes,” he stated.

According to Karki, the practical classes are related to farming, gardening, library management, workshops, furniture works, tailoring and so on. He elaborated that the courses have been designed to make students learn more in short time.

“We are focused on effectiveness of learning process. Practical and theory classes go hand-in-hand as to make them able to handle things on their own,” he said. Karki added that the students are also active in several creative fields.

“Some students might be good at music while others might be good in dance or arts and caricature. They might have special talent. We take notice of that too. Our students are also good in sports,” Karki said.

From morning to evening, the students are meticulously engaged. Before sleeping, they keep notes of the day. “This helps them remember things and make them more responsible. Our students keep record in diary everyday,” said Karki.

“Other schools also teach and we do the same. But the difference is that they teach inside classroom, and we teach outside as well. We are focused more on teaching outside the classroom. We teach not by telling them to read books but by letting them do things practically,” Karki added.

According to executive director of the foundation Surya Bahadur Rai, such kinds of schools are very much in need in a country like Nepal. The horizon of practical education has to be broadened, he said.

“Initially, we reached out to different schools and told them to adopt practical teaching approach. But nobody cared. Then we intervened in two schools and started classes as per our vision,” said Rai. “They came to understand when we ourselves started practical education,” he added.

The two schools approached by the foundation were in poor condition before. Both were on the verge of closure due to lack of students, Rai said. “After adopting the vision of the foundation, the popularity of the schools has soared,” he claimed.

Meanwhile, District Education Officer Gyan Mani Nepal termed the initiatives of the foundation as "excellent ". He stated that other schools should follow suit in order produce skilled and competent new generation.

“We must do away with rote learning like a parrot. Practical learning is the need of time,” he said.

Education is fundamental to the development and growth of every child. But, the painful fact is that every year many... Read More...