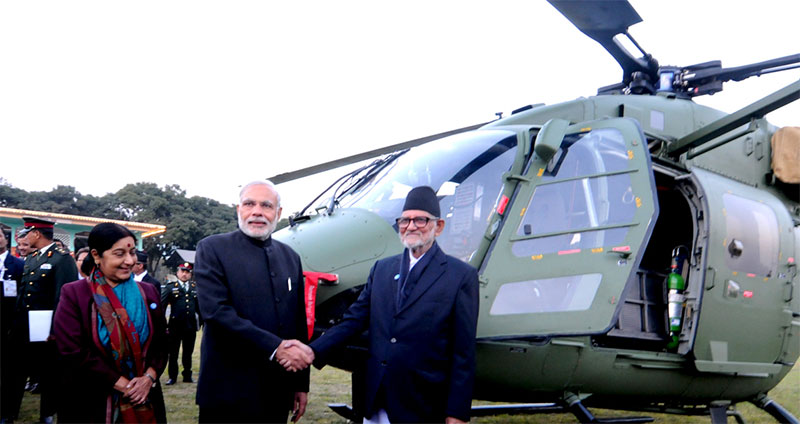 Indian Prime Minister Narendra Modi shaking hands with the then Nepali Prime Minister Sushil Koirala after handing over the chopper as a gift to Nepal at the Military Pavilion, Tundikhel on November 17, 2014. (Keshab Thoker/Repblica)

Modi had presented this helicopter to the then Nepali Prime Minister Sushil Koirala during the SAARC summit held in Nepal.

Modi had handed over the chopper named Air 2 Missile ALH Dhrub Mark 3 to his counterpart Koirala amidst a special ceremony organized at the Military Pavilion, Tundikhel on November 17, 2014.

The then Prime Minister Koirala had handed over this helicopter to former Chief of Army Staff, Gaurav Shumsher JBR.

India has sent the Nepal government a bill of Rs 1.27 billion – Rs 1.24 billion as the price of the helicopter and Rs 3 million as the maintenance cost of the helicopter including the allowances for the Indian technical team which had repaired the chopper, according to Shiva Prasad Simkhada, spokesperson for the Ministry of Foreign Affairs.

India had asked Nepal to pay for all the logistics provided to the Nepalese Army in the 12th meeting of the Nepal-India security group.

According to Simkhada, India had asked Nepal to clear the bill of over Rs 2.46 billion under the Uniform Benefit Method.

“The ministry has received a letter from Indian government regarding the payment of all the logistics including the cost of the helicopter in lumpsum.  The officials at the Ministry are mulling over it,” Simkhada told Republica Online.

The Indian side said that it has started taking the initiative to recover the long-drawn due after the Nepali officials asked them to reconsider the deal reached between the two countries to waive 60 per cent of the loan Nepal owes to southern neighbor.

When asked why Nepal has to pay for the gifted helicopter, Indian side said PM Modi had no idea whether it was a gift or on loan, this is the amount to be paid by Nepal.

Meanwhile, Indian Embassy in Kathmandu has refuted the report that India has asked Nepal to pay for the gifted chopper saying that is not based on facts.

In a rebuttal, the Embassy said, “The supply of military hardware between India and Nepal is done in accordance with the mutually agreed terms and conditions. There is no deviation in any of the supplies from what the two governments have agreed upon.”

On quality of the chopper, the Embassy said that the helicopter has already completed more than 300 hours of flying and it was the workhorse during the relief and rescue operations following the earthquakes in 2015 and the Jure Landslide by virtue of its landing capabilities in restricted areas and operability.

“India will continue its extensive defense cooperation with Nepal based on terms and conditions agreed upon between the two governments,” reads the Rebuttal.

KATHMANDU, June 27: In an apparent bid to discourage the use of Aadhar card as identification document outside the country, the... Read More...

One buried to death in landslide
38 minutes ago