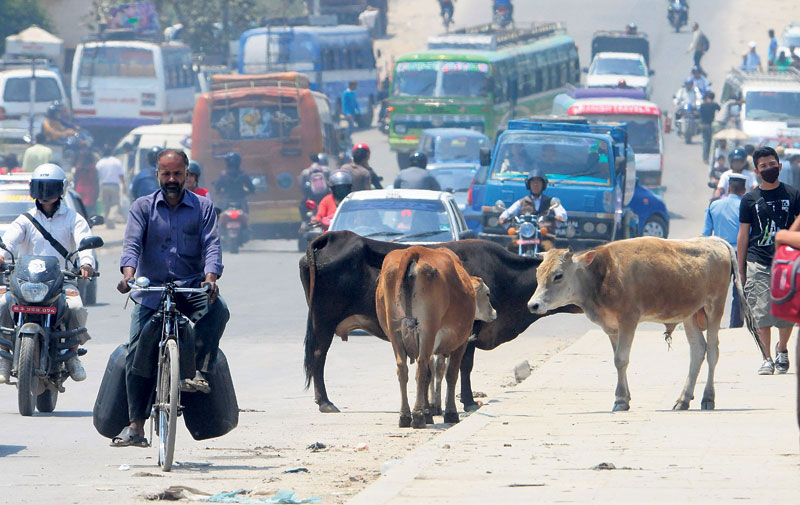 We have reached a point where the total length of vehicles in Kathmandu, laid end to end, is greater than the length of its roads
I usually try to avoid Kathmandu’s chaotic traffic, especially in the evenings, but one day last month I decided to cut through the traffic to attend a book launch program of the much-anticipated Dark Star of Kathmandu. Unfortunately, my efforts were unsuccessful and I ended up missing the event due to a traffic jam, even though I had allocated a sufficient amount of time between leaving work and the time the event was to start. Then again, such setbacks are not new to many of us living in Kathmandu. I believe many feel the government has not been doing enough to free the metropolis of traffic congestion.

There are many reasons behind the city’s traffic menace. First, we have already reached a point where the total length of vehicles operating in the Kathmandu Valley, laid end to end, is greater than the length of its roads. For instance, according to traffic police, there is only a total of 4.8 million feet of roads for vehicles that total 7.5 million-plus feet. Second, the roads of Kathmandu are built haphazardly and are not designed with safety in mind, because the roads were designed almost half century ago when we had far fewer vehicles. Third, when the number of vehicles increased, the same old roads were widened in the 1970s without scientific inquiry of any sort and that is the main reason why it is impossible to find straight roads in Kathmandu valley. Fourth, internet-enabled intelligent traffic lights systems that are able to communicate with smart phones are not in place to help traffic police manage traffic efficiently. Finally, smart urban planning is not yet a part of government vocabulary.

All this has contributed to making the city’s roads extremely dangerous, for everyone.  And, to make matters worse, commuters still have zero civic sense and do not seem to be following any traffic rules while maneuvering the pothole-ridden, polluted, dusty, and overpopulated roads of the valley.

Also, both pedestrians and motorists do not care about zebra crossings, or maybe they do not understand the concept. A zebra crossing is a place on a road, especially one where there is a lot of traffic, across which wide, black and white lines are painted, and at which vehicles must stop to allow people to walk across.

In many bigger cities with wider roads and heavy traffic, it is not possible to stop traffic every time someone steps on a zebra crossing. Therefore, pedestrians are only allowed to use a zebra crossing in accordance with the traffic lights. However, in Kathmandu, it seems as though the road is the zebra crossing. This could be due to the fact that the capital city does not have a smart traffic light system and the city’s zebra crossings are vanishing, because of the low quality paints used.

It is hard to believe Kathmandu does not have electric traffic lights even in 2017. What is even more interesting is that pedestrians have come up with a rule of their own, probably because the government is least bothered about the traffic chaos. Pedestrians have invented hand gestures to stop speeding vehicles in order to cross the road.

The only way to solve the metropolis’s traffic problem is to ban all cars and motorcycles inside the ring road. The idea might seem something out of a utopian fiction, but many cities in developed countries are already planning to go car free by 2020. For instance, Paris is already taking drastic measures to curb pollution, as the City of Lights has banned cars made before 1997 from entering the city centre on weekdays. At the same time, the city also instated a ‘car-free Sundays’ rule. Cities like Madrid, Barcelona, Stockholm and Hamburg are also planning to go car-free. Copenhagen, however, is the greenest city in Europe. The city created pedestrian-only zones in the 1960s. Now, over half of Copenhagen dwellers bike to work using more than 200 miles of bike lanes. The city now boasts the lowest percentages of car ownership in Europe.

Another city that is radically going green is Oslo. The Norwegian capital plans to permanently ban all cars from its downtown area by 2019 and all cars by 2025. The city plans to invest in public transport and also to replace 35 miles of car roads with bike lanes. Besides building green infrastructure and banning cars, the city is also coming up with incentives to encourage people to purchase bicycles. Last year, the city council offered financial incentives of up to 20 percent on the purchase price of an e-bike and 25 percent on the purchase of an electric cargo bike through its Climate and Energy Fund.

There is no reason why Kathmandu cannot follow European cities and implement radical and revolutionary solutions to solve traffic congestion as well as to curb pollution. After all, isn’t Nepal also a democratic country? If you ask me, there are a couple of steps the city can take immediately.

First, ban all fossil fuel guzzling automobiles inside the ring road on Saturdays. The “Sajha busses”, however, are to be excluded from the rule. This will contribute to promoting good health as people can enjoy riding bicycles with their friends and family on Saturdays. Second, remove customs and other taxes on bicycles so that people are not required to pay hefty sums for good bicycles. Third, put pressure on private banks to provide bicycle loans and also put quotas on auto loans. Fifth, do whatever it takes to stop the trend of breaking traffic rules.

Furthermore, the vehicles used by ministers and their security are the biggest perpetrators when it comes to breaking traffic rules. They just have to turn on their siren to break rules. I guess there are no rules for the bourgeoisie.

We the citizens understand they have important meetings to attend and important decisions to make. But if they want special traffic privileges, they have to build roads like in the capital cities of the West.

Then again, it is foolish to expect anything from the politicians, because most of them are weak minded who put party before people and only follow party line. However, things could change with politicians like Janardan Sharma, Baburam Bhattarai, Gagan Thapa,  Ujwal Thapa, Biraj Bahadur Bista and Lal Babu Pandit, to name a few.

Banning cars should not be an issue for a city that has successfully banned horns.

KATHMANDU, Dec 18: With an alarming increase in road fatalities across the nation in the past few months, stakeholders from... Read More...

Hacking of news website tantamount to pre-censorship: Experts
1 day ago

Australian PM Morrison advises foreign students to leave his country, thousands of Nepali students likely to be affected
10 hours ago

Cold remedies that work
20 hours ago