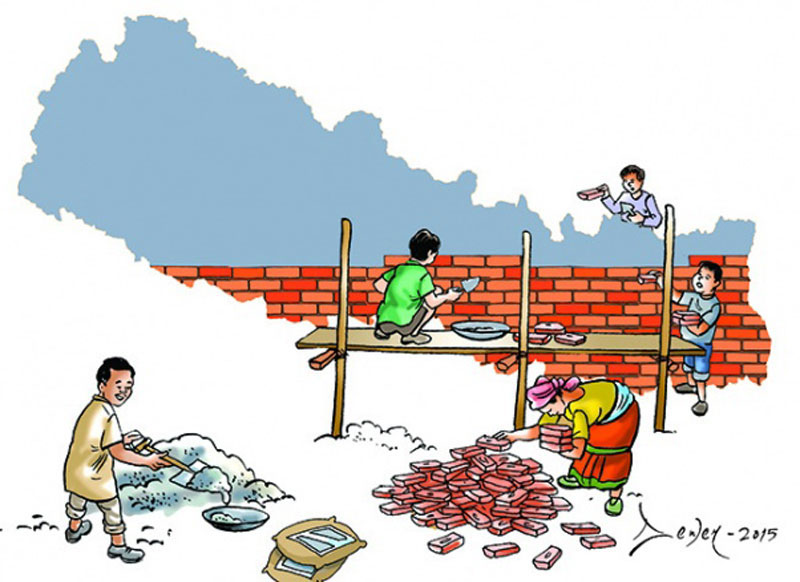 For people like my father in remote Gorkha there is still uncertainty over whether they will get any help
My father waited for over a year for government support to rebuild our destroyed house in Gorkha.

Tired of living under make-shift tents during heavy monsoon, he decided to build the house on his own. He is not sure if the house meets the criteria set by the National Reconstruction Authority (NRA) to receive the second and third tranches of post-quake money.

As we mark the second anniversary of the 2015 deadly earthquake, the biggest in 82 years, reconstruction of homes, schools, monuments and health centers have been painstakingly slow. Political confusion, bureaucratic hurdles and mismanagement of resources have forced quake-victims to live under dire conditions.

A massive 7.8-magnitude earthquake on April 25, 2015 and its subsequent aftershocks hit 14 of Nepal’s 75 districts the hardest and destroyed eight million-plus houses, killing almost 9,000 people. The government promptly formed the NRA to lead reconstruction efforts. However, in the last two years, less than 3 percent of the 887,353 destroyed houses have been rebuilt. The enthusiasm and the sense of urgency that the international community and the international press showed soon after the tragedy is now long gone.

In January 2017 Prime Minister Prachanda sacked Sushil Gyewali as the CEO of NRA and appointed Govind Raj Pokharel, former vice-chairman of the National Planning Commission, the same day in his stead. CEO Gyewali worked for a year and was blamed for slow progress in reconstruction of people’s homes.

At a parliamentary committee hearing last month, newly appointed Pokharel lamented that the authority has no power to mobilize the US $200 million of reconstruction fund due to the lack of an operational modality. The fund was set up a year ago to support reconstruction works.

The International Conference on Nepal’s Reconstruction was held two months after the earthquakes and donors pledged US $4.1 billion dollars, out of $9.38 billion needed for the five-year reconstruction plan. So far, Nepal has signed agreements for only $3.2 billion and spent $300 million in reconstruction. Moreover, the authority has approved $422 million worth of reconstruction projects from INGOs, but very little work has been done on the ground. INGOs have an easy target for the delays. Reports of abuse of resources by INGOs headlined Nepali press over the past two years.

In the meantime, the government is said to be planning for a second international conference to raise five-plus billion dollars needed for reconstruction.

The NRA mobilized 1,900 technicians (engineers, overseers and sub-overseers) last year to support reconstruction of earthquake-affected districts. Around 1,200 of them resigned in December of last year, citing inadequate pay and insurance. Further negotiations resulted in up to 75 percent increment in their perks, but still 200 engineers resigned en masse in mid-March and the number of resignations is expected to only grow. Better opportunities with INGOs and the harsh reality of working in remote rural villages made these young technicians quit their job.

And then there are the people in the mountains and hills who have braved two seasons of freezing winter and heavy monsoon under make-shift tents. These people have been safely ignored by Kathmandu. Only one-third of the households in Barpak, Gorkha, once a bustling tourist-hub and the epicenter of the earthquake, have begun reconstruction works. Only 19,739 houses (of total 626,695) have been rebuilt by the victims, and around 42,000 have started reconstruction of their houses. The government had announced a grant of $3,000 to each victim in three different installments.

It took almost a year to distribute the first tranche of $500 to the victims. With usual procedural delays, the distribution of second and third tranches of $1,050 and $1,000 respectively has been slow. Around 5 percent of households have so far applied to receive the second installment; less than 1 percent have applied for the third installment. A household needs to meet a strict set of criteria to get the installments. Only when the foundation of house is complete and the locally deployed engineer recommends second installment, is the victim eligible to receive second and third installments. In absence of engineers in villages, few houses met the criteria. At this rate, it will take years to rebuild all the houses across the 14 districts. The authority is reportedly working on easing such conditions to receive the money.

To make matter worse, we are facing a dearth of trained masons to build the houses. Massive outflow of young men to the Middle East for employment has led to an acute shortage of manpower to undertake mega rebuilding. Almost 1,200 young Nepalis leave the country for better opportunities in the Middle East every single day. An investigative story published in Republica estimated that building quake-safe houses might take over 100 years in Kathmandu that has only 242 trained masons to rebuild about 4,200 quake-destroyed houses. So far, only 5 percent of the houses have been rebuilt in Kathmandu.

There will today be big events and pompous celebrations to remember the dead and promises from the government to expedite reconstruction works across Nepal. However, the government’s ambitious plan to complete the reconstruction in five years remains a lofty dream. After two years of the biggest national tragedy in recent memory, there is only more confusion, lack of coordination and slow mobilization of reconstruction funds.

It is upon citizens like us to again and again remind the government of the urgency of rebuilding houses and schools so that we can lift the spirit of our fellow citizens who feel that the government in Kathmandu is unheeding of their everyday problems. We should never forget that the families who lost their loved ones on this day two years ago have no solace when meeting even their basic housing needs is a distant dream.

For people like my father in remote Gorkha there is still uncertainty over whether they will receive any support from the authority. At the current pace, one wonders if this reconstruction project will ever be completed; just as is the case with many other projects in Nepal.

ROLPA, Nov 26: After months of waiting and anticipation, Rolpa the origin of the decade-long Maoist insurgency, is ready for the... Read More...

PAANCHTHAR, July 1: On Friday, Sanjay Rai of Phidim, the district headquarters of Paanchthar, was busy noting down the poll updates... Read More...