18 dead amid reported tornadoes, other storms in the South 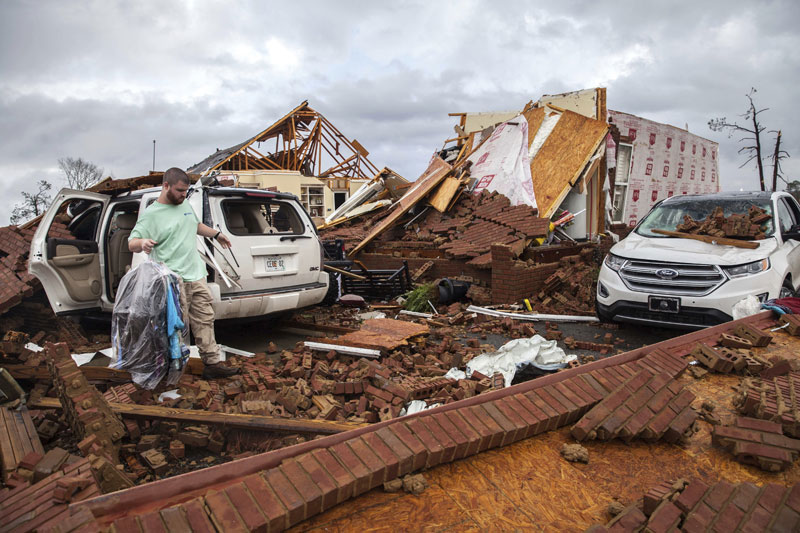 ADEL, Ga, Jan 23: A severe storm system that spun off apparent tornadoes, pulverized mobile homes and scattered other destruction around the Southeast has claimed at least 18 lives on a two-day assault on the region, authorities said.

The enormous system put millions of people in the South on edge during a weekend of violent weather that destroyed homes, downed trees and caused other damage in the hardest-hit communities from Mississippi to Georgia. The severe weather threat was still continuing Sunday night in some parts, extending into South Carolina and north Florida.

At least 14 people were killed Sunday in Georgia as the intense, fast-moving storms tore across the state throughout the day, with at least one deadly tornado reported before dawn and violent storms still rumbling after nightfall. Four people were killed Saturday in Mississippi when the system began to ramp up.

"There are houses just demolished," said Norma Ford, who rushed out with other relatives Sunday evening after hearing a reported twister had overturned her nephew's mobile home in the southwestern Georgia city of Albany, the region's largest city with some 76,000 residents.

She said downed trees and powerlines made roads impassable, forcing them to walk the 2 miles to the mobile home park to check on her relatives. She said her nephew was fine, but several of his neighbors' homes were destroyed.

Yet the day's deadliest toll came before daybreak Sunday when an apparent tornado blew through a mobile home park in south Georgia — about 60 miles southeast of Albany — shearing away siding, upending homes and killing seven people.

Coroner Tim Purvis of south Georgia's Cook County confirmed that seven people died at the mobile home park, where about roughly half of the 40 homes were "leveled." Georgia state emergency officials initially reported an eighth death in that county, but Howden later said that was incorrect.

The other deaths in Georgia were reported elsewhere.

Not far from the mobile home park, 19-year-old Jenny Bullard wore a sling on her injured arm as she combed through the rubble of her family's brick house. All that remained standing Sunday afternoon was the master bedroom and parts of the kitchen.

"It's a horrible tragedy," Bullard said. "But all this stuff can be replaced. We can't replace each other. We're extremely lucky."

Bullard said she awoke before dawn Sunday to the sound of hail pounding the roof. When she went outside her bedroom door, she was knocked down by a collapsing wall in the hallway. She managed to get up and found her father calling for her, trapped under debris.

She pulled him free, and they found her mother in the master bedroom. They escaped by climbing over piles of furniture and debris where the wall to their home office once stood.

President Donald Trump said Sunday he had spoken with Georgia Gov. Nathan Deal and "expressed our sincere condolences for the lives taken."

"Tornadoes were vicious and powerful and strong, and they suffered greatly," Trump said during a White House ceremony where he was swearing in aides. "So we'll be helping out the state of Georgia."

Several homes appeared to be destroyed along on a road within about 2 miles of the mobile home park, with cinderblocks scattered on the ground, and pine trees uprooted and snapped in half. The tops of broken utility poles lay alongside the road.

The South Georgia Motorsports Park in Cecil also was heavy damaged; a grandstand was ripped apart. Barrels, signs, insulation and garbage were strewn over the speedway and parking lot.

Two of Sunday's deaths occurred when a mobile home was struck by an apparent tornado in Brooks County, which moved the home roughly 100 yards before dawn Sunday. "A tornado hit a mobile home, picked it up and put it in the middle of Highway 122," Brooks County Coroner Michael Miller said. "I don't know if it rolled or was lifted, but it blocked the entire highway."

While the central part of the U.S. has a fairly defined tornado season — the spring — the risk of tornadoes "never really goes to zero" for most of the year in the southeast, said Patrick Marsh of the Storm Prediction Center in Norman, Oklahoma.

January tornado outbreaks are rare but not unprecedented, particularly in the South. Data from the Storm Prediction Center shows that, over the past decade, the nation has seen an average 38 tornadoes in January, ranging from a high of 84 in 2008 to just four in 2014.

The last time the prediction center issued a high-risk weather outlook — where forecasters are very confident of a tornado outbreak — was in 2014. Sunday marked only the third time since 2000 that any part of Florida had been at a high-risk for severe weather, Marsh said.

"This is a pretty rare event in this location," Marsh said.

Make arrangements for students who returned from China due to COVID-19 to go back: Parliamentary committee
22 hours ago

Yak and Yeti organizes its first tennis tournament
13 hours ago

New leadership elected in four municipalities of Bhaktapur
18 hours ago