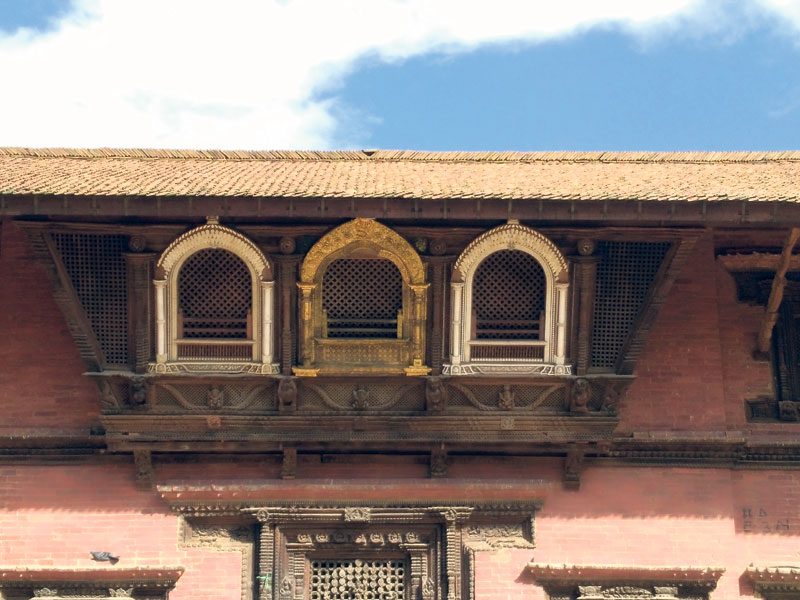 The three-section bay window at Patan Durbar Square after its left and right sections were restored.(Republica)

KATHMANDU, Sept 23: A group of conservationists have restored two windows of a centuries-old building located inside the Patan Durbar Square following three years of continuous efforts.

The conservationists designed and assembled the windows using materials such as white marble dust and bone dust, whereas the original one was made of elephant tusks. The modern alternatives were applied for restoring the damaged Malla-era windows as the present laws prohibit use of ivory for such purpose. One of the three units of the traditional bay window didn’t need any repairs and still consists of the original materials.

A team of conservationists from the Austria-based University of Applied Arts reinstalled the ivory windows on September 15. The three windows are positioned above the main entrance to the Sundari Chowk inside the durbar complex.

“It was so difficult for us to decide whether to use the original ivory or make it using other materials to give it the original look while restoring the historical art. Eventually, we decided to use those materials because we could not use animal parts in present times,” Rohit Ranjitkar, conservation architect at Kathmandu Valley Preservation Trust (KVPT), told Republica. “But the Austrian team came up with these ideas and made it possible to restore the old windows maintaining their original look.”

According to Ranjitkar, the design was prepared in Vienna and later it was brought to Nepal and fitted into the wooden frame of the building. He informed that about 75 per cent of the old windows are in damaged condition.

The trust, which has been working for the conservation and restoration of various parts of the complex for years, asked the Austrian team to restore the windows.

“The windows are amazing piece of this complex and I am glad that I succeeded in restoring such precious pieces,” said Manfred Trummred, assistant professor at the Austrian university.

Austrian team crafted all the artificial materials in their studio at the university in Vienna.

“It took almost eight months to make the parts resemble the original ivory designs,” said Trummer, who has been working in conservation of Patan Durbar Square since 2010. “But the wooden frames are made by Nepali artisans. In our country, you cannot see handcraft arts. I learnt a lot from the Nepali workers.”

However, some experts have expressed dissatisfactions over the use of artificial materials.

“It would have been great had they used original ivory to restore the window. But unfortunately the existing laws don’t allow the use of animal parts,” Satyamohan Joshi, a historian and culture expert, told Republica.

Joshi described the windows as one of the precious pieces from the 17th century. “Malla-era is the golden period in Nepal’s history when beautiful woodworks were crafted, but the ivory-decorated windows are more important than other artworks,” he said. “We should have done timely restoration to preserve them so that our future generation, too, could enjoy them.”

Ranjitkar, of KVPT, said that it would have been certainly better had they been able to use the original ivory for restoration.

He informed that the original ivory windows, which are in a damaged shape, will soon be placed inside Patan Museum, which is also situated inside the same complex, for display.

During the Malla era, the kings who ruled Patan, Bhaktapur and Kathmandu installed similar windows into their palaces. According to Ranjitkar, a similar window was located in Bhaktapur, but unfortunately it was destroyed before the 1934 earthquake. The windows of Hanumandhoka Palace at Kathmandu Durbar Square are still in good shape.

KATHMANDU, May 4: Japan has provided financial and technical assistance worth over Rs 8 million to Nepal for the reconstruction of... Read More...

KATHMANDU, April 26: The Supreme Court on Wednesday issued a temporary order to halt the construction of a building belonging to... Read More...