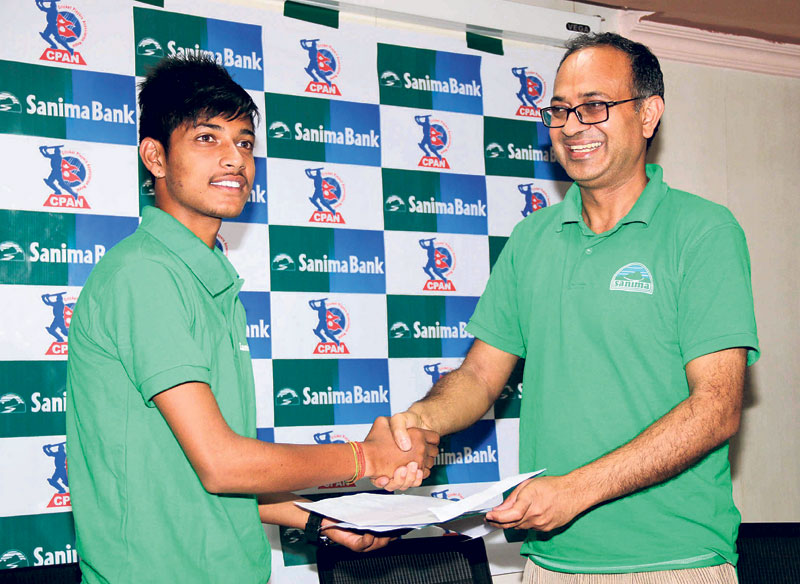 As per the agreement, Sandeep will receive Rs 20,000 per month from the bank in return for promotional activities involving Lamichhane.

Sandeep, who represented Nepal in the ICC U-19 World Cup held in Bangladesh, came into the limelight for his extraordinary bowling in the event.

The second highest wicket taker of the tournament, Sandeep had claimed the only hat-trick of the competition against Ireland. He also played for national team against Namibia in the third round of the ICC World Cricket League Championship held at the TU grounds, Kirtipur in April.

CEO Dahal said that the bank sponsored Sandeep with the view to motivate other corporate houses to take similar steps of supporting players and promoting cricket. “We just took the initiation by sponsoring Sandeep and we hope other corporate houses will come forward to support the players so that they will not have to worry about their livelihood and dedicate themselves to the game,” said Dahal, adding that sponsorship amount could be increased after two years if everything goes on right track.

Similarly, Sandeep, elated with the sponsorship, said that he will try to perform even better in the coming days. “I will leave no stone unturned to represent the country in future and perform even better. I hope that other corporate houses will also sponsor other cricketers of the batch,” added Sandeep.

Meanwhile, CPAN President Pawan Kumar Agrawal said that the association would be helpful in creating environment for sustaining cricketers. “Our main target is to make players focused on the game only and not worry about their livelihood. The step Sanima Bank has taken will ease us to approach other corporate houses as well,” said Agrawal, former national cricketer.

Likewise, national team skipper Paras Khadka, also the general secretary of CPAN, added that the association's main target was to ensure financial security of players. “We are not here to replace Cricket Association of Nepal, but do things that will help the cricketers,” he said.

KATHMANDU, April 25: Sanima Bank Ltd has increased its interest on deposits to 8 percent. Issuing a statement, the commercial... Read More...