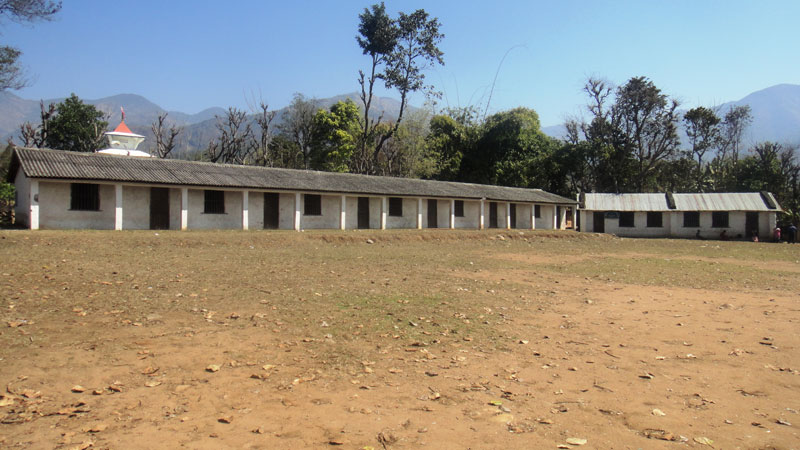 A general views of the Saraswati Primary School (SPS), Gurbhakot, Surket. Once a popular school in the area, presently only 15 students are enrolled at this state-run institution. Photo:Kalendra Sejuwal/Republica

SURKHET, March 24: Despite government's investment in education, few parents are ready to send their wards to state-run schools. A school in Surkhet stands as a perfect example of how government is failing to save even those schools which performed well some years back.

Saraswati Primary School (SPS) of Gurbhakot, which is situated around 55 kilometers from the district headquarters, Birendranagar, was a thriving school with massive enrolment of students. Now, however, the school has no more than five regular students while the total number of students enrolled at the institution is 15. The school has four teachers.

“It no more feels like it is the same school,” said the school's Principal Sita Kumari Ghale. “We have a total of 15 students and of these only five come to school regularly,” she added, while looking at the students who were busy with books when this scribe visited there last week.

According to Ghale, there were over 300 students in the school a decade back. During the past ten years, the number has been reduced to 15. And of these most are irregular. “In grade one and two we have one student each, in grade three we have two students, in grade four there are five students and in the fifth grade we have six students,” she informed.

The reason behind the sorry state of this school is not the lack of infrastructures or human resource. The teachers feel that the craze for private school has hit government schools including theirs.

“We have good building, play ground, teachers and all the resources that a school requires. But we are losing students to private schools as the parents are not convinced that we can provide quality education,” said the principal Ghale. “We tried a lot to stop our students from switching to other schools. But we failed,” she added.

When the parents were switching their children to private schools, teachers held meetings and tried to convince parents for not doing so. They even asked them to keep vigil on the school activities and called them to monitor things on a regular basis to ensure that the school was providing quality education to their wards. However, this did not help, Ghale said. “The entire community has developed negativity towards government run schools. It is very hard to change their mindset,” she noted.

SPS was established in 1982. It was running pretty well till 2007. According to Gurung, children and parents were happy as the school was ahead not only academically but also in extra curricular activities.

Gurung links the deterioration of the school also with the end of the conflict. After the Maoists came to peaceful politics, private schools mushroomed in the village. As private schools were available nearby, parents were not ready to keep sending kids to government schools.

Meanwhile, the principal Ghale lamented that the school does not have any future now. Despite trying very hard, the school could not attract students, she said. “We feel that we come to school just to sign in the attendance register. It has no meaning. There is no zeal left to teach in class,” she stated.

Prem Bahadur Thapa, one of the four teachers of the school added that series of motivational activities were carried out to retain the existing number of students. “We tried to persuade the children and their parents in various ways. To make it look like a private school, we standardized the school uniform. We added textbooks. We reached door to door and expressed commitment to make our school number one,” he said.

A teacher at the school sits next to students while they do class work. Photo: Kalendra Sejuwal/Republica