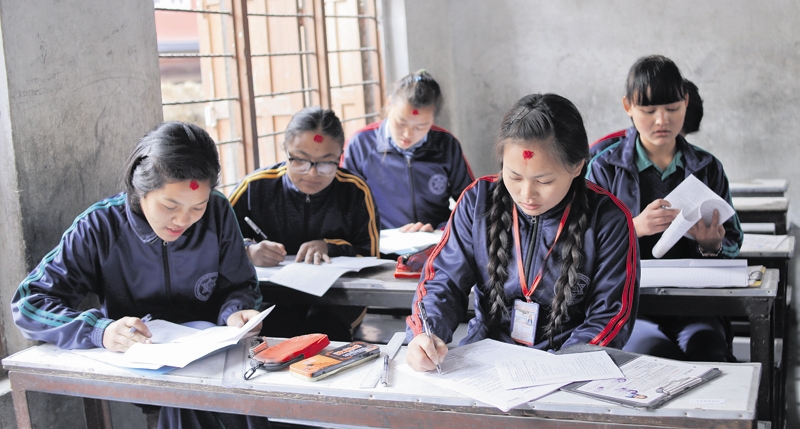 KATHMANDU, March 24: The Secondary Education Examination (SEE) of Grade 10, which used to be called as School Leaving Certificate (SLC) exams in the past, concluded on Friday with the target of publishing the results within three months.

The exams were conducted in 1,923 exam centers from 8 am to 11 am from March 16- 24 across the nation. However, the SEE of technical groups will conclude after three days.

According to the National Examination Board (NEB), a total of 538,182 students including technical groups were registered for the SEE. However, about 8,000 students were disqualified due to lack of 75 percent attendance, not paying the registration fees and drop out after filling forms.

Overall, the SEE was held in a fair manner, said the officials at the Office of the Controller of Examinations (OCE). A total of 119 students were expelled, nine invigilators and three superintendents replaced and an office assistant was punished for their involvement in helping students cheat during the exams, according to the OCE. “The results of the SEE will be published within 90 days,” said Ambika P Regmi, controller at the OCE. “The session of Grade 11 will begin in July as usual,” he added.

This is the first exams of Grade 10 at the regional/provincial level after the implementation of the eighth amendment to the Education Act 10 months ago. The Education Act has provisioned the SLC exams to be held in Grade 12 as the School Leaving Certificate Examination (SLCE). The SEE has been decentralized in the five development regions, with five different question sets. “The SEE should have been conducted in the seven provinces. But it could not happen due to lack of NEB bodies in the federal states,” said the OCE officials. “The name of the exams has been changed but it is equivalent to the past SLC exams.”

The Act has provisioned holding the Grade 8 exams by the district boards, Grade 10 exams by region/province boards and the Grade 12 exams by the national board.

It is the second time that the letter grading evaluation system was practiced in Grade 10. According to the MoE, the letter grading system will be gradually enforced in school level exams from Grade 1 to 12. The system is being implemented in Grades 9 and 11 from this year.

Students in Nepal don’t get as much attention for any other examination results--be it +2, Bachelors, Masters or higher--as they... Read More...