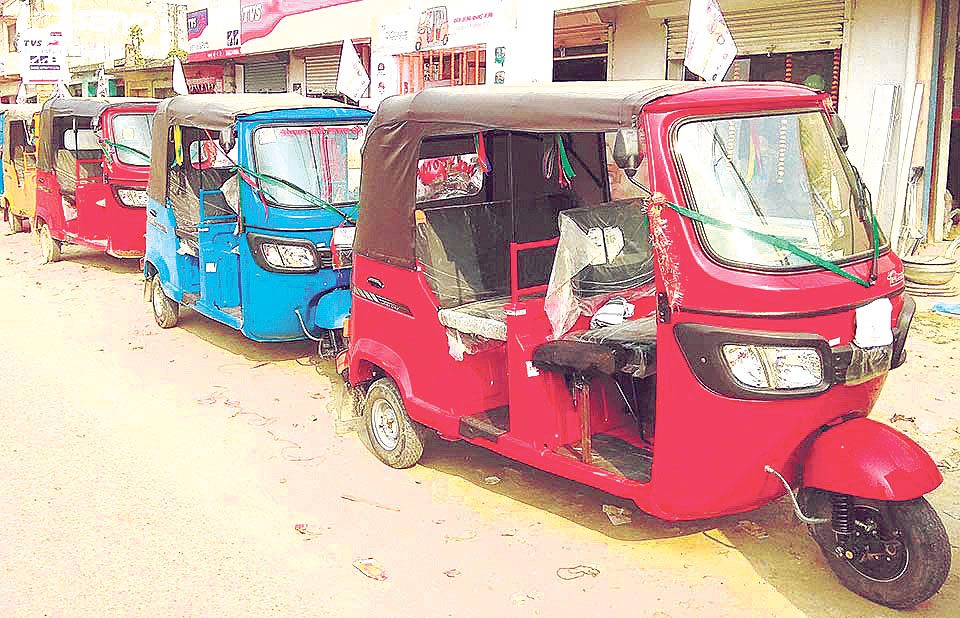 Number is higher than total registrations over past 28 years

Registration of new tempos in FY 216/17 is higher than total registrations in the preceding 28 fiscal years. Though experts attribute the rising number of tempos in the country to easy registration process, officials of DoTM do not see any definite reason.

According to a data provided by the DoTM, 17,782 tempos were registered in FY2016/17. Total registration of tempos between FY 1989/90 and 2015/16 was only 11,681.
“Most of the newly-registered tempos are plying in tarai districts,” transportation expert Tulasi Sitaula said.

These tempos are different than the battery-powered 'Safa Tempo' seen in Kathmandu Valley. They are actually auto rickshaws. Such tempos are a regular sight in tarai districts around the East-West Highway extending from east to west. The tempos have established themselves as dependable public means of transportation in places like Biratnagar, Birgunj, Janakpur, Nepalgunj, and Dhangadhi along with many urban and sub-urban centers of tarai.

While the officials of DoTM denied talking on the issue, some transportation experts did not hesitate to talk about the reasons behind such a high growth in registration of tempos.

Transportation expert Sitaula, who is also a former secretary of the Ministry of Physical Infrastructure and Transport (MoPIT), said that ease in registration process introduced recently by the government is the main reason behind the jaw-dropping increase in number of tempos.

Sitaula said the government had tightened registration during his time at the MoPIT.
“Tempos were rarely seen when I was in the office. We were of the view that such tempos (auto-rickshaws) should not run on highways as they have low capacity,” he said, adding: “We tightened the registration accordingly.”

“We had taken a stance that auto-rickshaws should be under the jurisdiction of local units as they are means of local transport,” added Sitaula.

A source told Republica that private sector was lobbying hard since long to open registration of tempos. “Dealers of Indian temp producers in Nepal have high profit margin. So they are doing everything to push tempos to the market,” the source added.

The inability of the DoTM to explain the reasons behind surge in new registration of tempo has put a question mark on integrity of the department.

KATHMANDU, June 8: A day after the board of the Election Commission decided to register the newly-formed Nepal Communist Party (NCP),... Read More...

KATHMANDU, Jan 21: The office of National Natural Resources and Fiscal Commission (NRFC), the constitutional body with an authority to advise... Read More...

KATHMANDU, Nov 18: A total 67 lawmakers have registered amendment proposal to the 13 different provisions in the proposed new... Read More...