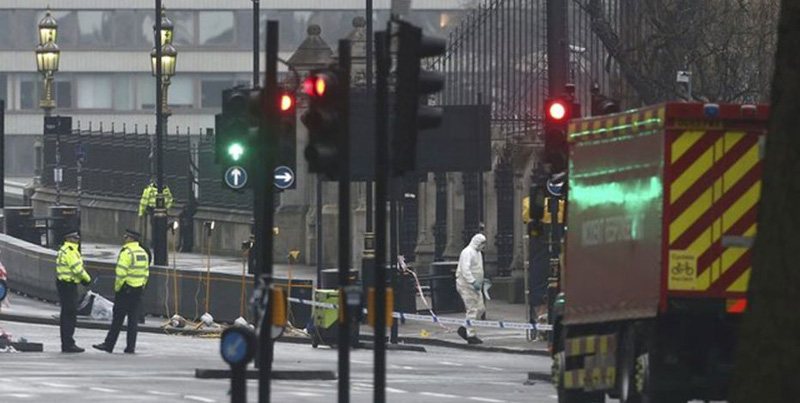 LONDON, March 23: The police have arrested seven people in the investigation into a lone-wolf attacker who killed five people and injured 40 before being shot dead by police near the parliament in London, Britain’s most senior counter-terrorism officer said on Thursday.

The police officer, Mark Rowley, said five were dead, including the attacker, and 29 people were still being treated in hospital, seven of whom were in a critical condition.

On Wednesday, the police had said the death toll was five in the worst such attack in Britain since 2005.

The attacker sped across Westminster Bridge in a car, mowing down pedestrians along the way, then ran through the gates of the nearby parliament building and stabbed a policeman before being shot dead.

Britons have been shocked by the fact that the attacker was able to cause such mayhem in the heart of the capital equipped with nothing more sophisticated than a hired car and a knife.

The assailant is said to be of Asian origin and in his early 40s. However, there is no official word from police on the identity of the attacker yet.

“The police and agencies that we rely on for our security have forestalled a large number of these attacks in recent years, over a dozen last year,” said British Defence Minister Michael Fallon. “This kind of attack, this lone-wolf attack, using things from daily life, a vehicle, a knife, are much more difficult to forestall,” he told a foreign news agency.

Police believe they know the identity of the attacker but have not named him.

“We’re dealing with an enemy, a terrorist enemy, that is not making demands or taking people hostage, but simply wants to kill as many people as possible. This is a new element to international terrorism,” Fallon said.

Rowley said police had searched six addresses in London, Birmingham and other parts of the country in their investigation.

“It is still our belief … that this attacker acted alone and was inspired by international terrorism. At this stage we have no specific information about further threats to the public,” Rowley said.

He said there was a mix of nationalities among the dead but gave no details. The victims were the policeman, Keith Palmer, who was stabbed and two members of the public, a woman in her mid-40s and a man in his mid-50s. The fourth dead was the assailant.

After the incident, a terror alert was issued in the entire country.

Police also reportedly had prior knowledge about a possible terror attack.

May to confront Trump as UK police stop sharing attack information with U.S

British Prime Minister Theresa May said on Thursday she would tell U.S. President Donald Trump that intelligence shared between their... Read More...

KATHMANDU, Dec 18: Police on Wednesday have arrested two people from Kathmandu on the charge of running a fake trial for... Read More...