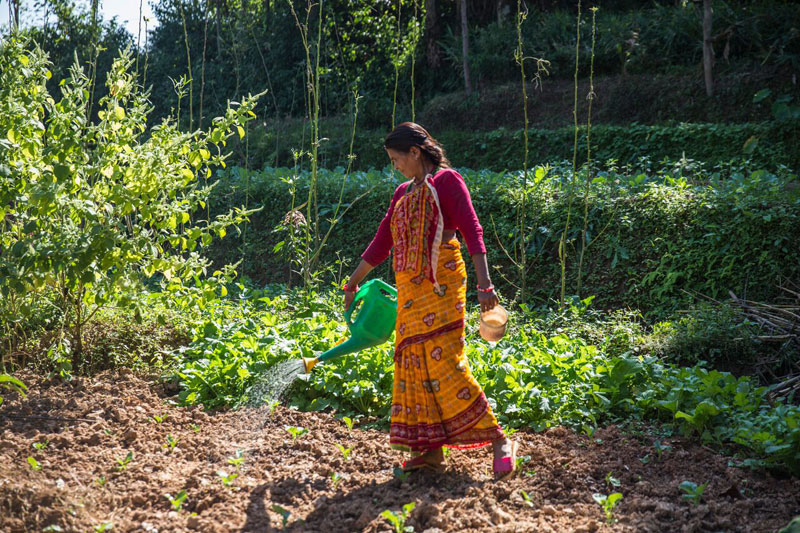 For women left behind problems arising from water scarcity and water-induced disasters make them more vulnerable
Somewhere in a mountain village in the Himalaya, a woman folds a taro leaf into a cone, fills it with soil, and sows a seed. She waters her little cone with waste water from the kitchen, creating an enabling environment for the seed to germinate. She hopes that in time the seed will add a bit of greenery to her kitchen. For her, water flows down in the river where it is not easy to access, and the nearby springs are all drying up as the climate changes. She has no option but to maximize the use of available water. She has to reuse and recycle. The taro leaf prevents seepage, holds water for more days, and turns into manure over time. By the simple act of planting a seed the woman is utilizing holistic knowledge and combining various resources to maximize benefit.

This is just one instance showing how resourceful mountain women have been in actively engaging in managing water resources. Traditional knowledge of the skills necessary for surviving in harsh mountain terrains, passed on from one generation to another, gives mountain people a unique, holistic understanding of how a single resource can be put to multiple uses. The principle of reuse and recycle is at the core of resource management for women and men living in challenging environments today, as it was in the past. It is unfortunate that such age-old practices are forgotten as communities rush to modernization, and the availability of water starts to get determined by the ability to pay for it.

Today, the changing climatic and socioeconomic context has created multiple challenges for people, especially women living in Hindu Kush Himalaya (HKH). Six out of eight countries in South Asia lie in the HKH, and according to the 2015 Human Development Report, South Asia stands lowest on the Gender and Development Index among all the regions of the world. Whether it is a village along the Ganges, Koshi or Indus rivers, it is women who are solely responsible for managing water resources for the family. The men are absent, having ventured off their farms in search of employment.

For the women left behind, problems arising from water scarcity and water-induced disaster, and the associated conflicts and insecurities makes them more vulnerable. The situation in cities is no different for women among the urban poor. With increase in migration to cities and competition for aesthetic and industrial water use, women among the urban poor struggle to manage water and compromise their water need for the sake of their family members. By 2015, 663 million people in the world still lacked safe and improved drinking water sources, and 2.4 billion lacked improved sanitation, and women and girls bore the brunt of it.

Water is becoming scarce not only due to the changing climate, but also as a result of unequal development efforts such as the diversion of water sources from rural areas to meet urban water needs, and unequal control by various sectors as well as unequal consumption. Globally, income inequality is increasing, and so is water control and access. Today, around 80 percent of global wealth is with just six percent of the world population. The remaining 20 percent is distributed amongst 96 percent of the population. The World Cities Report 2016 has noted that 75 percent of world’s cities have higher levels of income inequality than two decades ago. Per capita water consumption among the people with more wealth is drastically high.

For instance, in Mumbai, India, per capita water consumption among populations in the suburbs is 15 times more than that in the slums. All these increase women’s water drudgery in water scarce areas. The irony is that for many, water is a surplus resource. Human behavior influenced by a consumerist market and capital-oriented lifestyle and development often makes us blind to the water poverty of others. When flowing water taps becomes affordable and accessible to us, we easily forget that this is all at the cost of others. Moreover, a water system in which waste water just flows into a centralized drainage system does not even allow us to evaluate how much water we might have used; forget about reusing and recycling.

Today, increasing water scarcity in the face of both climatic and socioeconomic changes demands urgent action for the reuse and recycle of available water resources, both at individual and institutional levels. Though planned water sector development has mostly prioritized water transfer or ground water exploitation as a way to meet water need, a paradigm shift on water systems design where reuse and recycle are given due importance could minimize potential water scarce scenarios for the region. Changing our habits to make sure we reuse and recycle water will not only help us meet our water need, but also reduce gender water poverty by reducing water conflicts and water grabbing, and by promoting sensitivity to water sharing.

The world celebrated Water Day on March 22 with the provocative question-slash-theme “Why waste water?” to raise awareness on the importance of forgotten practices related to water reuse and recycling. Water reuse and recycling are crucial to meeting Sustainable Development Goals. The first beneficiaries will be women who will immediately benefit from the increased availability of water.

On March 8, Women’s Day, we committed to being bold for gender transformative change. After the World Water Day, we need more commitment to changing our individual behaviors, and learning to become ‘water conservers’ from ‘water consumers’. This too can be a step towards achieving gender transformative change. Our efforts at the individual and institutional levels in reusing and recycling waste water will reduce water drudgery and water poverty for many women and girls. We will soon be celebrating World Earth Day on April 22 with the theme ‘Trees’ and making more commitments to achieving sustainable goals for global happiness. After all, is it not our responsibility to live as human beings driven by the ethics and value of cooperation for co-existence?

The author is Gender, Water and Adaptation Specialist in the Livelihoods Theme, at the International Centre for Integrated Mountain Development, ICIMOD

Simple ways to give back to the environment

There are simple ways that you can do every day in order to help our environment. All these things are... Read More...

Let's not overshadow the issues that Prem Archaya tried to raise: Dr Toshima Karki
42 minutes ago