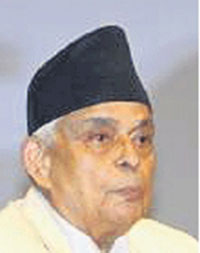 Adhikari was flown to Bangkok for treatment after serious complaints of stomach and urinary bladder last week.

Adhikari is undergoing treatment at Vejthani Hospital in Bangkok.

According to his family sources, he has also a heart-related ailment. Doctors are administering medicine to him on the ground that it would be risky for him to undergo heart surgery due to his age.

Adhikari had undergone treatment at Medant Hospital in Haryana, India. Adhikari had been treated at three different hospitals in Kathmandu before being flown to Thailand. He was flown to Bangkok after seeing no signs of improvement in his health condition.

PHOTOS: Fishing craze in Pokhara
9 hours ago
Registration of over 300 manpower companies likely to be scrapped
11 hours ago