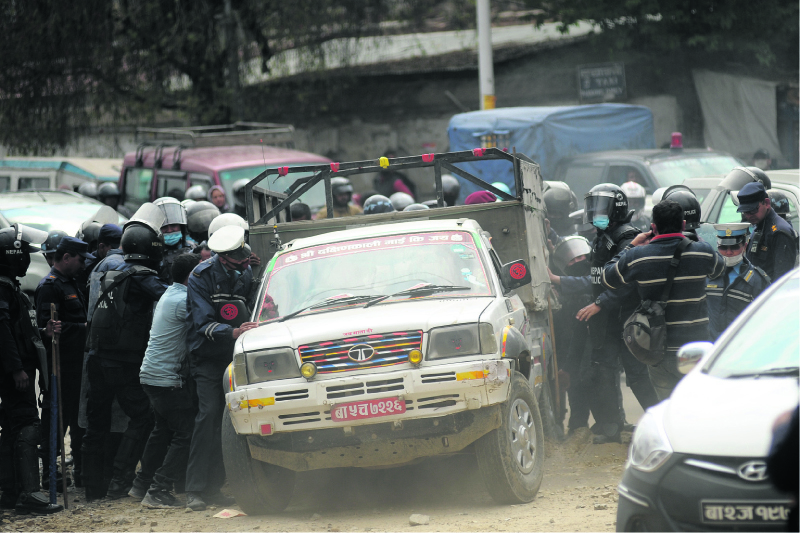 Policemen push a vehicle which got stuck in a pit at Jamal, Kathmandu on Monday(picture by BIJAYA RAI/REPUBLICA)

KATHMANDU, March 20: For the past few months, Yogesh Shrestha, a teacher known for his punctuality and promptness, has not been able reach school on time which has badly affected his class. Despite leaving home an hour earlier than usual, he still can't manage to reach the school on time due to heavy traffic jams which have become a daily routine these days.

“No matter how early I wake up, there hasn't been a single day when I do not get struck in the traffic,” Shrestha laments. He says the situation of traffic congestion has worsened in the Kathmandu Valley, adding that it seems to be going out of hand. “There was a time when I used to yell at students for late arrival, but now I have lost that right,” Shrestha added.

According to Traffic Police Inspector Sita Ram Hachhethu, the major reason for the worsening traffic situation in the valley is the ongoing road expansion drive and the pipe-laying work for the Melamchi drinking water project. He said that the unsystematic and ill-managed digging and filling of the pits on roads has not just increased traffic congestion but also led to various other problems like accidents and pollution.

Roads are being upgraded to eight lanes, adding to the miseries of the commuters, pedestrians as well as traffic police. “We don't want the authorities to stop the construction but it will be better if the construction works are carried out at night when the roads are empty,” Hachhethu said.

Hachhethu says when the digging for the eight-lane roads area is complete at all places, that is more likely to increase traffic congestion, pollution and accidents. There are potholes and bumps everywhere on the roads which obstruct the vehicles and ultimately lead to traffic congestions. “I know the government is investing millions of rupees to expand the roads but that money cannot be worth more than the health and time of the people,” Said Hachhethu adding “If the government really cares about its citizens, then it should invest some more money for black topping at least two lanes of the roads.” According to him, blacktopping at least two of the eight lanes will ease vehicular movement, thereby reducing the traffic congestion a bit.

Traffic police lament that it makes them really feel sad when people, especially drivers, accuse them of not monitoring the vehicles on roads. “There is no weakness from our side. We start working from the early morning and have dedicated ourselves completely to managing traffic congestions despite suffering the most, especially from the air pollution,,” Hachhethu claimed.

It has been found that roads at Kalanki, Kalimati, Thapathali, Satdobato, Koteshwor among others face massive traffic jams everyday. Binita Shahi, a commuter, says people will be able to reach anywhere faster on foot than on vehicles but that is not convenient either because of the pollution and ongoing construction works. “The situation is going to be even worse as the monsoon is yet to come,” Shahi said. Besides the mismanaged construction works, she blames “too many vehicles, carelessness of drivers, lack of proper parking areas and Zebra crossings, etc” for the worsening traffic situation in the valley.