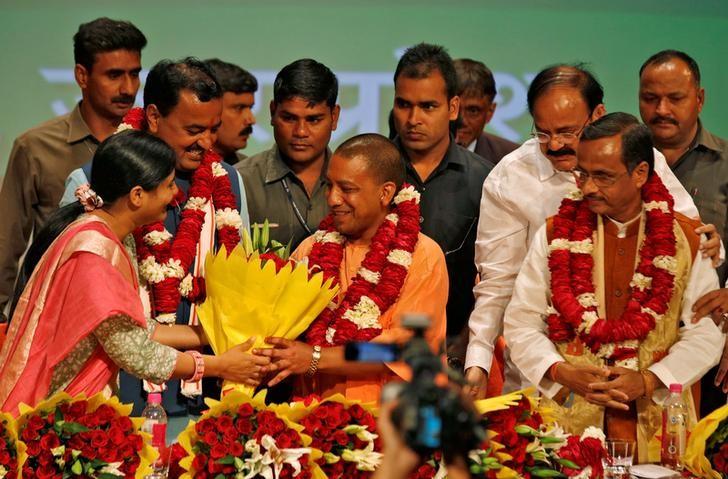 LUCKNOW, March 19: A saffron-robed Hindu holy man was sworn in on Sunday to lead Uttar Pradesh, sealing what appears to be a shift in course by Prime Minister Narendra Modi that could redefine the world's largest democracy as a Hindu nation.

The choice as Uttar Pradesh chief minister of Yogi Adityanath, a firebrand Hindu ascetic with a history of agitation against minority Muslims, stunned observers who said it marked a departure from the platform of development for all on which Modi rose to national power in 2014.

"Modi is saying India is a Hindu country and shall remain so," veteran journalist and commentator Shekhar Gupta told Reuters.

"Hindus will rule, so you had better behave."

A spokesman for Modi's Bharatiya Janata Party (BJP) however said the government did not make any distinction between citizens on the basis of religion.

Adityanath, 44, was elected by state lawmakers on Saturday, a week after the BJP won a landslide victory in India's most populous state by mobilising the Hindu vote. The BJP won the biggest majority for any party in the state legislature in 40 years.

He took the oath of office at an open-air ceremony in the state capital Lucknow on Sunday, before shaking hands with Modi and other BJP elders who attended.

After the ceremony, Modi said in a tweet: "Our sole mission and motive is development. When U.P. develops, India develops."

India's 1.3 billion people are about 80 percent Hindu and 14 percent Muslim, with the rest made up of Christians, Sikhs and other minorities. It is officially a secular nation, but the BJP has for years fought elections on a Hindu nationalist agenda, with party members in the past being accused of making anti-Muslim statements to polarise Hindu voters.

"Modi and the BJP had promised the poor of India good times to come," said Paranjoy Guha Thakurta, editor of the Economic & Political Weekly.

"When they fail to create jobs, revive the economy or lift investment, they are going to fall back more on the majoritarian agenda."

Modi, in his victory speech after the Uttar Pradesh triumph, had called for the creation of a "New India" by 2022, effectively staking a claim to a second term at the general election that is due to be held in two years.

Adityanath, elected five times to the federal parliament from Gorakhpur in eastern Uttar Pradesh, has been magnanimous in victory, pledging to uphold Modi's slogan of 'sabka saath, sabka vikas' ('all together, development for all').

"Everyone who is prejudging the decision is doing it at their own peril - these arguments were also used in the case of Prime Minister Narendra Modi," BJP spokesman Nalin Kohli told Reuters.

"Almost three years down the line there is no departure from 'sabka saath, sabka vikas'; there is no let up in providing governance and improving delivery to the poorest; and there can be no distinction between citizens on the basis of their faith, region or identity."

A source close to the powerful Hindu nationalist umbrella group to which the BJP belongs, the Rashtriya Swayamsevak Sangh (RSS), said Adityanath would undergo a complete image makeover to repackage him as a moderate reformer.

Adityanath has in the past accused Muslim men of waging "love jihad", or a love war, to entrap Hindu women and convert them to Islam. He drew a reprimand from the election authorities for exhorting Hindus to convert 100 Muslims for every Hindu that adopted Islam.

Further, he disclosed in his 2014 election affidavit that he faced criminal cases including attempted murder; intimidation; promoting religious enmity; defiling a place of worship; rioting; and trespassing on burial places.

Such cases are common in India's rough-and-tumble politics. Although judges have taken cognisance of three cases against Adityanath, no formal charges have been filed.

As the month-long Uttar Pradesh poll progressed, the rhetoric used by Modi and his campaign chief Amit Shah struck an increasingly harsh tone: In one speech Modi said villages with graveyards should have crematoriums too - a veiled reference to the different burial practices of Muslims and Hindus.

One of India's most prominent Muslim politicians, former Jammu and Kashmir state chief minister Omar Abdullah, said in a tweet that Muslims in Uttar Pradesh "must be terrified of what the future has in store for them."