As it is life isn’t easy, and it’s especially difficult when you are a transgender living in Nepal. Nilam Poudel, a model and makeup artist by profession, who was born a boy but knew from the start that she wasn’t one at heart, has had to face countless struggles and hardships in life to get to where she is now. However, with a positive outlook instilled in her by her father and determination to rise above the norms she took the challenge life posed head on and emerged victorious.

Here she talks about what gender means to her, being your true self, and why accepting yourself the way you are despite what ‘others’ say about you is crucial in life if you want to succeed.

I was born into a poor family in a village and my childhood memories consist of me helping to cook food for workers in the field, carrying fertilizers, washing dishes, and doing other household chores. I only stayed with my family till I was in class three. After that, I was sent to work as a house-help so that I could fund my own studies.

When I was in school, I knew I was different than the other boys because I felt like a girl. I didn’t know about my sexuality so it felt like I had a disease. When I was in class eight I learnt about sex in an article and that made me realize how I was feeling was completely normal. I researched further and finally understood my sexuality.

I joined the Blue Diamond society and later, after I passed my SLC exams, I was called for a radio interview where I revealed my identity to everyone including my family members, live on air.

Previously, I worked in a construction company overseas and even worked as a caretaker of a wealthy Sheikh’s home while they were away. Later, I returned to Nepal and trained as a makeup artist. Right now, I’m a makeup artist and I model as well. I participated in the En Vogue House Of Fashion competition recently and that was one of the most beautiful moments of my life. The people I met there were incredibly inspiring and motivated and supported me a lot. I might have felt awkward in the beginning during the grooming sessions and such but with time, I became more confident about myself and learnt not to feel out of place and uncomfortable during such situations.

My behavior has changed and that’s the biggest change, and one that I’m very proud of, that’s come about in these years. Now I’m stronger than ever before and I’m independent as well. The people who had made fun of me in my village earlier now ask about me and want to meet me. There were a few people in school who used to make fun of my sexuality but now those very people are my friends and support me.

Her source of inspiration

My inspiration is definitely my father. In an era when the society was biased and it was hard to earn a decent meal, my baba always made sure that no one remained unfed or was unhealthy. He worked hard. He accepted who I was. Never once in my life did he make me feel disappointed in myself. Sending me away to work as a house-help was a decision he was forced to make, as he really wanted me to get a good education and he was unable to afford it. Sometimes I wonder how proud he would have been if he could see me now. At a time when the society looked down upon the likes of me, my dad understood and respected me. He’s been gone for two years but he’s still my biggest source of inspiration. He taught me that you don’t have to be rich or educated to accept humanity in its various forms.

Her opinion on gender

I will say that all of us are born equal. People shouldn’t be judged on the basis of their gender. If you have to judge, judge them on the basis of how they behave or present themselves, or how they are at work. Our culture has accepted just two gender forms and that too given the high status to men. Women are still ‘fighting’ for their ‘rights’ and in many professional arenas, men tend to get better pay, better facilities than their female colleagues simply because of their ‘gender’. In such a scenario, the LGBTI community will never be fully accepted and integrated in the society.

I remember walking on the streets and encountering people who would tell their kids to call me names like Chakka, Hidaja and so on. I used to feel bad about it but more than that, I felt bad about the way the child was being raised. When parents don’t teach kids the value of respect, they will grow up to become selfish, inconsiderate human beings and that’s a sad thing. Respect is an important virtue. If you know how to respect people, you will respect them despite their gender and the world will be a better place that way.

Where she sees herself in 10 years

I want to further hone my makeup skills and be a better makeup artist. I also want to be involved in social activities with the LGBTI community and also try and help the society to, at least, learn to accept us. Personally, I think it would be much easier for people of my community if there were a bar or restaurant catering specially to us. In Nepal’s context, we still have a lot to accomplish before that happens but I want to open a bar for the LGBTI community just to create a place where they can feel safe and comfortable and not worry about their families and the society at large while meeting new people. 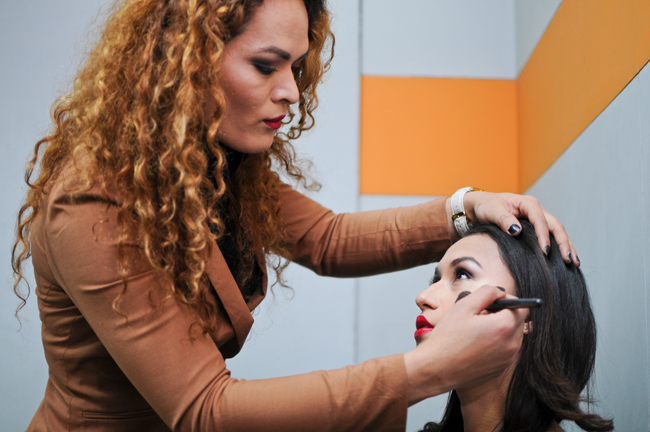 KATHMANDU, April 17: Supreme Court officials on Monday found the Durga yantra which was thought to have been lost about 25... Read More...

BHIMDUTTANAGAR, Sept 23: A machine gun, which disappeared from Nepal Army's Far-western Division at Dipayal of Doti in the beginning... Read More...