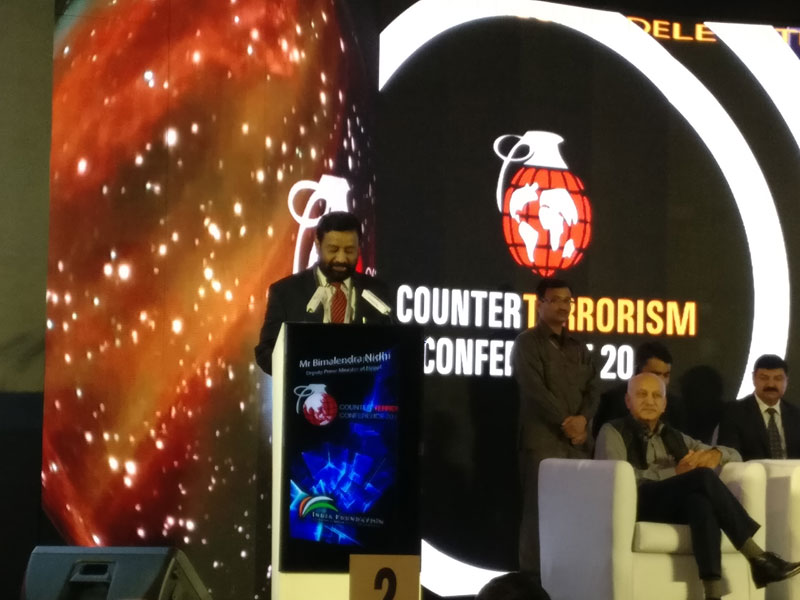 KATHMANDU, March 15: The Deputy Prime Minister and Minister for Home Affairs, Bimalendra Nidhi said that terrorism in all its forms and manifestations is a serious global threat to humanity and urged for firm commitment at the highest level to stop terrorist acts and bring perpetrators to justice.

Addressing the Counter Terrorism Conference - 2017 in New Delhi on Tuesday evening, Nidhi stated that terrorist activities are against fundamental values of liberty, humanity, freedom and universal brotherhood, he said, terrorism not only causes loss of precious lives of innocent people but also disrupts society’s progress and country’s development.

Recalling the 2004 Iraq incident, when 12 Nepali workers were killed by terrorists and the 2016 Kabul bombing, where 13 Nepalis were killed, DPM Nidhi said that such heartbreaking acts of terrorism have victimized thousands of innocent peoples, in one way or the other, within and across the national boundaries.

According to Embassy of Nepal in New Delhi, DPM Nidhi further stated that as the number of terrorist outfits and their sophistication and technology grows, threats of terrorist attacks on any given day become all the more possible. The activities of larger network of terrorist organizations at global scale and their reported expansion in the Asia Pacific region provides us the reason to be extra vigilant to counter the threats, he said.

Ruling alliance on the verge of collapse over new president, home ministry row
14 hours ago

PM Dahal holds meeting with UML Chairman Oli, RPP Chairman Lingden
11 hours ago
Bill on money laundering to be amended through fast track process
10 hours ago
If you want to seek your property share, go to Baluwatar: MP Agrahari
8 hours ago