In the service of power 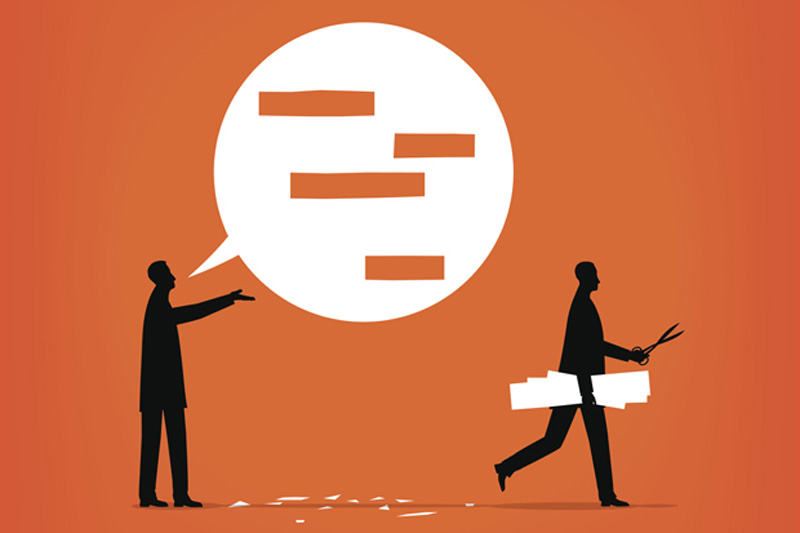 Governmental editorial directives on rising above ideological divides, instead of edifying journalists, end up irritating them
Minister for Information and Communications Surendra Kumar Karki sounds more like an editor or a journalism professor these days. He has publicly delivered lessons on a variety of pertinent topics, ranging from reporting and writing to media management and ethics. In particular, he has repeatedly urged journalists to write “positive news” in the service of “social responsibility”. More importantly, he has called on journalists to be politically “impartial” so that they are able to make journalism “a dignified profession”.

To paraphrase one of his recent pronouncements: a journalist who distorts the truth in order to flatter a political party or group lacks credibility.

Our Prime Minister Pushpa Kamal Dahal is not far behind in his editorial instructions. In fact, he appears methodical in his media strategy. He has exhorted “all media” to work with “an integrated approach”. The Himalayan Times (Feb 14) quoted him as saying: “The media should contribute in maintaining togetherness and harmony among all the people from rural and urban areas, among people from culturally and socially different communities, and among ideologically and politically different leaders.” Indeed, a complex set of seemingly noble tasks.

Maybe they are impossible to achieve, but there is nothing disagreeable in their pronouncements. In particular, the issues of “ideology” and of “impartiality” pester even a layperson, often faced with the challenge of devouring content in more than a few outlets with different leanings just so “the truth” can be discerned.

Untangling ideology in the polarized pluralist media of Nepal with a dizzying quantitative breadth poses a challenge to even our informed and perceptive audiences, especially because outlets are not always consistent in their political loyalties. A bigger issue with governmental editorial directives on bridging ideological divides is that instead of edifying journalists they end up irritating them.

Political leaders themselves thrive on opposition and division. So they are hardly heeded by working journalists or their managers. Here’s a government that is more of a lector than an enabler, a helper.

Seasoned journalists, having covered different political dispensations over many decades, know from experience that harmony, in the official version, is often about silencing critics, and impartiality about shunning a political party in favor of another. Positive news? That is the official jargon for successful government PR. The point is, government sermons, however honest, have their own political or ideological purpose.

As media critic John Thomson puts it, ideology is “meaning in the service of power”. The meaning of news content is judged in relation to whether or not a message conforms to the existing beliefs of the powerful or the authority.

Not surprisingly, federalism, republicanism and secularism, as today’s dominant political thoughts, dominate headlines while ideas like monarchy or unitary statehood are covered only for their deviant news values. Ideological divide is becoming more pronounced in the battles between the so-called dominant nationalist Khas/hill elite media subservient to the establishment and the assortment of often anti-establishment liberal media avowedly working as the voice of the less-fortunate, powerless, and excluded communities.

But there is more to ideology than just this duality as perceived in the left-right divide. This is evident in the inability or disdain of certain sections of the media to adequately address issues of the Madheshis, minorities, and the sentiments of our international friends, or in the aversion of another section of media to criticizing foreign powers, or extremists in the country.

The problem of political ideology in our media today is essentially underlined by the tension between the Marxist view, the hegemonic view and the radical democratic view. In the first, media, as a key part of the “total structure” must serve as the tool of the government. Hegemonic media enjoy some political autonomy but they are influenced by the elites, by the ideas of those who finance the media institutions, or by the views of the news sources used frequently in the stories. Genuinely community-based media movements adhere to the radical democratic perspective.

The good thing about this tension is that we are finally developing different ways of looking at reality rather than the traditional monolithic view of media under the “command” model, some of whose features are revived now and then depending on who is in power.

Since the structures of our “authority” extend beyond politics at the macro, abstract level, we cannot close our eyes to other manifestations of ideological influences in news, such as our organizing economic principles, broader philosophical outlook, idea of the nation, religion, public opinion, and journalists’ own individual beliefs and professional views.

Our media’s ideological foundations are in the process of reformation and adjustment. Still some features are clearly and consistently embedded in the news. Federalism is the new ideology of news, for example. Any challenge to it is deviance.

In America, the ideology and practice of capitalism has had a profound bearing on the belief system of journalists. Other forms of economy generally get a bad press. Our mixed economy manifests itself in the news coverage in the form of an endless contest of strength between socialism and capitalism, between our romanticism for subsistence farmers and our contempt for greedy businesses. However, the existence of our corporatist press increasingly depends on capitalism. So watch out for their ideological clues.

Our broader philosophical outlook, steeped in the narratives of bravery, loyalty, tolerance, hardship and fatalism, influences media messages in a big way. The so-called Sati’s curse, a part of our national lore, is often sufficient to explain the news about our failing politics or our “deplorables”. This insipid pessimism, however, is giving way to some demonstrated by our highly mobile, entrepreneurial new generation. The news reflects this ideology.

The ideology of the nation, often contested in recent times, becomes highly evident in the news, especially during times of conflict with foreign powers, or with fringe political entities inside the country. Nationalism has more news value than patriotism.

Secularism is the new religion of the country and journalists themselves would consider the issue of religion as “sensitive”. But the dominant Hindu ethics is the principle moralizing element which shapes the content of our media. In fact the Hindu lore offers many narratives of evil, profanity, and craftiness that come handy in interpreting our modern leaders. Buddhism is largely relegated to lip homage, no matter how much the news declares, “Buddha was born in Nepal”. Other religions are covered mostly for their deviant news value.

Public opinion as an influence in news is something new in Nepal. Since the 1990s, the news paradigm became little more enlarged to accommodate the many voices of people concerning social justice, human rights, equality etc. “Inclusion” thus emerged as a new and powerful ideology in news.

Finally, journalists’ own individual beliefs, especially of the activist and advocacy journalists, and their professional ideology based on the principles of “mission journalism” or “free press”, intertwined with their personal impulses, also influence news. This professional-level ideology is in full display at the Federation of Nepali Journalists, most recently through lockups and hunger strikes demanding an end to partisan membership practices.

The extent of these influences must have increased over the years. As professionalism becomes a norm for the new generation of journalists, the modes and patterns of influence have certainly changed: they are getting more and more subtle and unsuspecting.

To restate, dominant ideology of news manifests in different forms, and it falls on this ideology to define harmony, impartiality, or positive news for the day, although, of course, critics will keep challenging them. And they should, for in a democratic society, in a fair contest of news, the winning ideology must prevail.

The government should move from instruction to action, helping create the environment needed to address its concerns.

I do not have desire to cling onto power: Outgoing Minister Shrestha
5 minutes ago

Govt has not barred BFIs from accepting land as collateral: Minister Shrestha
12 minutes ago

NAC to revise its 10-year business plan
45 minutes ago