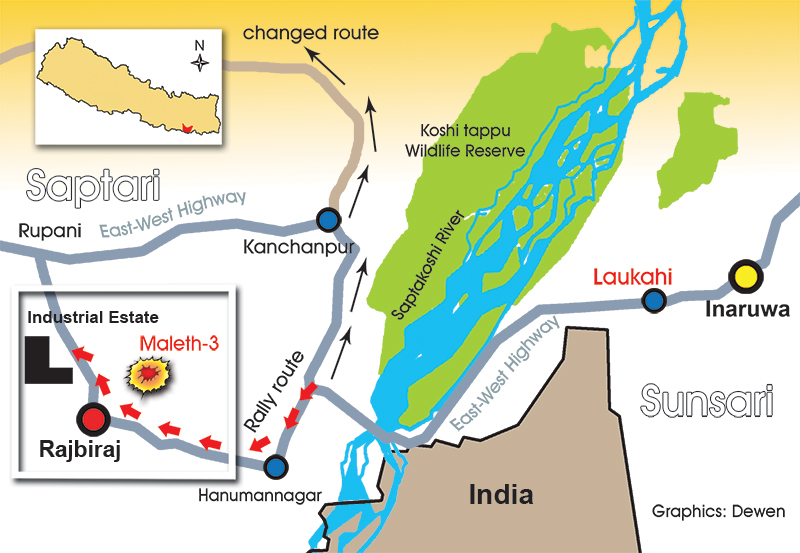 MALETH, March 7 :  As the CPN-UML launched its scheduled Mechi-Mahakali Campaign at Kakarvitta, Jhapa district on Saturday, the Saptari chapter of the United Democratic Madhesi Front (UDMF) announced that it was going to foil the main opposition party"s event in Saptari district.

No sooner had the UML launched its campaign in the far-eastern town than  UDMF-Saptari began its preparations to disrupt the UML gathering scheduled for Saptari.

Sensing possible trouble, the UML shifted its venue to Gajendra Narayan Singh Industrial Estate, 5 kilometers from Rajbiraj. But the UDMF cadres protested against holding the gathering at the industrial estate also. They padlocked the premises.

But on Monday morning, security forces took the area under control and the organizers started preparations for the event.

Fearing possible clashes, the UML changed its original  Bhardaha-Hanuman Nagar-Rajbiraj  procession route  and made its way  through Bhardaha, Kanchanpur and Rupani.

The UML leaders led by party Chairman KP Sharma Oli reached the Industrial Estate at around 4 pm. By that time, the protesters had already gathered outside the  event venue. The security forces  stopped them from entering the area, said Sushiladevi Sah, who witnessed the tense situation.

While UML leaders were addressing the party gathering, protesters had been repeatedly scuffling with police personnel. As the situation took a nasty turn,  police started firing teargas shells, said Sushila. 'As the police fired teargas shells repeatedly, the locals became terrified,' she said.

We felt suffocated at home and so we went to the Maleth area, said Bijay Yadav. 'As the party leaders concluded their speeches and were leaving the venue, we suddenly heard gunshots,' he said. 'We then ran  from the spot. But the security personnel entered our houses and attacked us.'

According to him, the three were killed at that same time.  Munidevi Sah of Maleth-4, another eyewitness, said  the security forces first dispersed the protesters with teargas and 'then fired indiscriminately at  people in the settlement area'.

'I saved myself and my four children, hiding in a cowshed,' she said. Local health worker Anan Sah was shot at and collapsed right in front of her at Malethchowk, she added.

JANAKPUR, March 14: Holi is a big festival for Janakpur residents. It would be celebrated with great pomp that included folk... Read More...