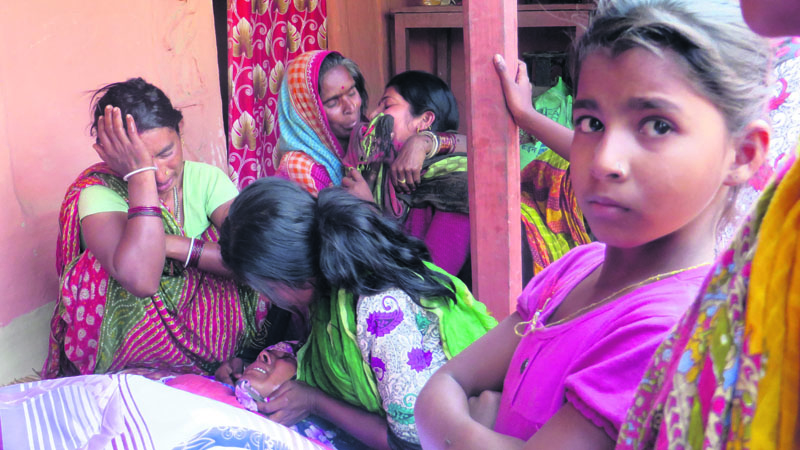 SAPTARI, March 7: It has been two days since Sabita Mehta of Maleth-2 got bed-ridden. Her relatives have been forcefully feeding her water. She is alive she but not fully conscious. Every time she wakes up she starts screaming: “Let me go, he (Sanjan Mehta) is calling me!” and later gets unconscious.

The house has been grief stricken since Monday. Newly-wed Sabita is going through a great pain after her husband Sanjan Mehta, 24, was killed by a bullet fired by security personnel during a clash in the district on Monday. Sanjan, who was the breadwinner of the family, used to work in a shop. Sabita and Sanjan had tied the knot nine months ago. As the bullet went through his brain, Sanjan died just 50 meters away from his home.

As soon as she heard the news of police firing, Sabita rushed to the spot where the mishap occurred. After pushing aside all the people who had gathered around the body, she found her husband lying dead in the middle of the crowd. Upon seeing her husband dead she collapsed to the ground. At first, she was taken to her home by her relatives. But the homemade remedies used by the family members and relatives to revive her were not effective as her health condition started deteriorating. Later, she was admitted to Gajendra Narayan Singh Sagarmatha Zonal Hospital (GNSSZH).

Family members and relatives of Sanjan are still not able to believe the bitter truth of his death. With eyes full of tears, they are still expecting to see Sanjan.  “He was a focused man who had nothing to do with politics. All he enjoyed was working at his shop,” said Sushila Devi Sah, a neighbor.

On Monday, he was on his way to the shop when the security personnel shot him, as claimed by the family members. According to them, Sanjan was not able to open the shop in the morning due to UML’s rally which was organized in the same locality where his shop is situated.
“How will I survive now? Please bring back my husband. If not, kill me too,” says Sabita. The news of Sanjan death also took toll on his elder brother Rajendra Kumar Jha, who had to be admitted to the hospital as well.

Similarly, Pitambar Lal Mandal of Ward No 4 of the same village was also shot by the security personnel. Bijay Kumar Yadav, an eyewitness of the incident informed that he and Mandal were having a conversation with each other when they heard the firing. That created chaos in the whole village.

“He was directing his two sons and two daughters toward home as police shot him,” said Yadav. According to Yadav, security personnel committed a major blunder by shooting an innocent person.
Family members of Mandal have been silent after the terrible incident. “It breaks my heart when I try to imagine my family without my son,” lamented Gosai Mandal, father of Pitambar.

The pain of mourning the death of six family members

RAUTAHAT, August 21: Last week, six members of the same family lost their lives when an ambulance they were riding... Read More...

The pain of mourning the death of six family members

RAUTAHAT, Aug 20: Last week, six members of the same family lost their lives when an ambulance they were riding... Read More...

3 members of same family buried to death in Tehrthum

TEHRHTHUM, July 1: Three members of the same family were buried to death after a landslide above came off and... Read More...