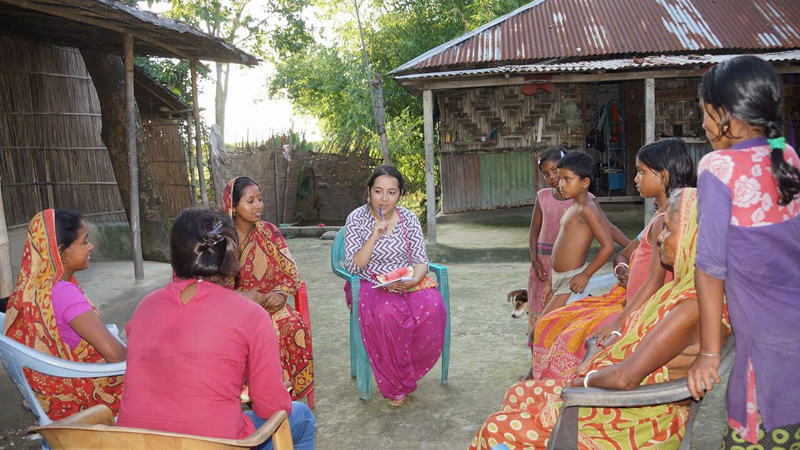 We saw no representation of Himalayan women in history or literature, nor in the research and development sectors
On the occasion of International Women’s Day, it is important to reflect on the importance of the inclusion of gender in academia. The goal of gender professionals is to ensure fair representation of marginalized groups in a variety of discourses—be it literature, science, history, or even current affairs and popular culture. A larger awareness of the need for an inclusion of gender in everyday discourse has been recognized since the inception of the Sustainable Development Goals (SDGs).

This SDG is not a singular goal. It is one that crosscuts other SDGs. SDG 5 is a precondition for achieving other SDGs. At the same time, all the other SDGs have implications for gender equality.

Thus gender equality is now universally accepted as being critical for individual, community as well as national (overall) development.

Gender, women’s narratives, and issues of the marginalized are widely recognized in our time.

Research and development sciences, as well as academia consider their inclusion in the everyday functioning of society essential. However, as a profession though, gender is still judged and often sidelined. Even reaching this point where working on gender is recognized as a career path is an accomplishment.

When we first started our careers in gender, backed by our degrees in women’s studies, development, and natural resource management, we were challenged by the difficulty of trying to explain to people the nature of our work without being misunderstood. The first impression most people had of us was that we would ‘teach’ feminism and ask communities to discard cultural norms, gender roles, and traditionally accepted structures and practices.

A career in gender is one that is both challenging and fulfilling, and absolutely necessary. The decision to work in gender for many of us arises out of the necessity to open a different perspective into an ever evolving world where we are both progressing and regressing. By far, the most exciting thing about working on gender is that we get to “unlearn” and learn in equal measure. But the study of and work on gender cannot fit into a monolithic identity. It is hence necessary to have men and women from different experiences, contexts and cultures contribute to the birth of new discourses.

Our choice to work on gender and more specifically on gender in the Himalaya stems from the need for representation. Growing up and hailing from small Himalayan towns and villages, we saw no representation of Himalayan women in history or literature, nor in the research and development sectors.

Academic and official writing on the representation of gender from a gendered lens ensures that conventional stereotypes are not perpetuated and reinforced, both within and outside literature. A career in gender is not limited to the social sciences. It is relevant to other disciplines and sectors as well. Here, based on our experience working at the International Centre for Integrated Mountain Development (ICIMOD), we take examples from two traditionally male-dominated disciplines which are treated as gender neutral, and adopted as crucial components in the organization.

Talk of gender in Geographic Information System (GIS) is new. Until now, practical work on geospatial has been seen only as an analysis of high resolution images to discern land use and land cover. Spatial study from a gendered lens is necessary, however, especially in Himalayan or rural contexts where climate induced change and corporate globalization have led to migration, particularly of men. A feminization of responsibilities has taken place, leaving women not only with the burden of more work, but also with independence. Gender in GIS plays a significant role in helping disaster risk management, and reducing environmental and climate change impacts in vulnerable areas. It also serves to illustrate distribution and access to resources, which in turn helps bring socio-economic issues and disparities between men and women in the areas concerned to light.

Economics is another discipline where gender has proven pertinent. Dialogues on gender and economics first brought the issue of unpaid labour into discussion. This is how work done by women in the form of household chores and taking care of family members came to be recognized as work. Even so, women’s work until now has been largely invisible, and their contributions have not been recognized in economic discourse. The involvement of economics in gender and vice versa brought awareness regarding how traditional work hours have always enabled men to work in public spaces and succeed in the ‘labour market’. Professionals who work in economics and gender help bring out gender disaggregated data, which, in the past, was not considered important in research analysis.

For a long time, in the absence of gender disaggregated data, gendered differences were neither documented nor analyzed, making it impossible to form connections between social issues, norms/practices, and economic activities and income.

Working on gender requires constant discovery—of new maps, theories, and definitions. The inclusion of gender in all fields of study is necessary to ensuring well-rounded and inclusive work and output. More gender experts, both men and women, with knowledge of several areas of work, research and study are needed to ensure that more discoveries are made and that old methods, understandings and discourses are deconstructed.

Namchu (Chhaya.Namchu@icimod.org) currently works at the International Centre for Integrated Mountain Development (ICIMOD) as a Gender, Water and Equity Analyst
Hamal (Menaka.Hamal@icimod.org) works at ICIMOD as a Gender, NRM/GIS Associate

KATHMANDU, May 5: Eleven North Korean nationals, who were working illegally in Kathmandu, have been arrested from Durbar Marg today. Read More...

IN PICS: Dahal-Nepal faction of NCP stages mass gathering in capital
14 hours ago