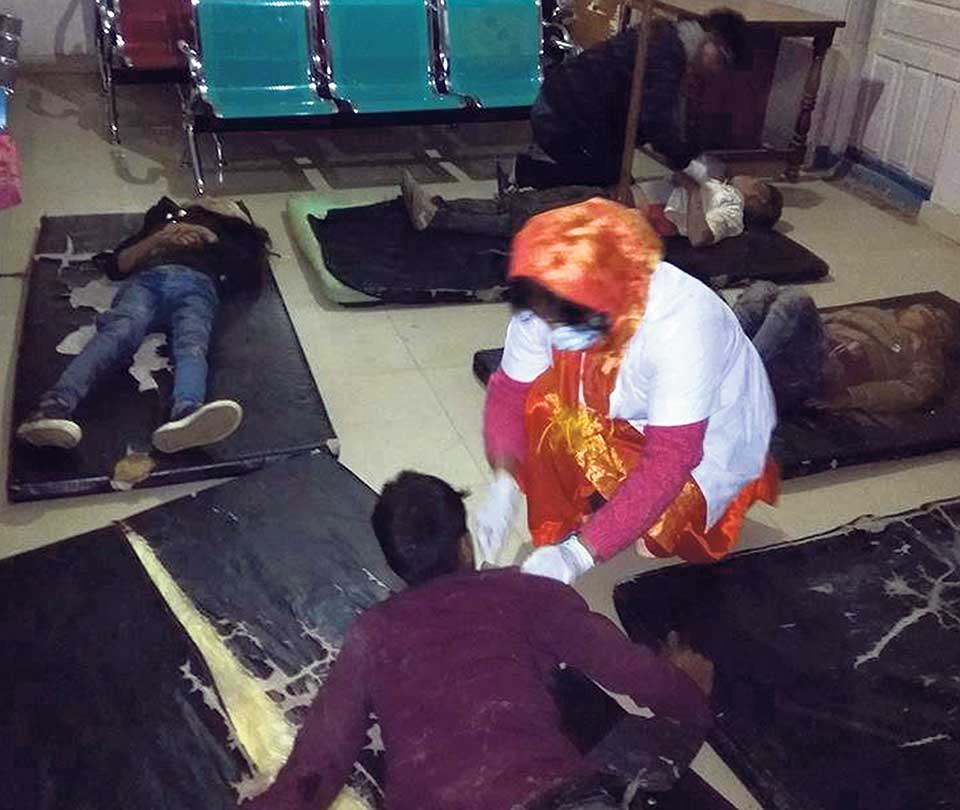 A nurse at the Sub-regional Hospital in Dadeldhura attends to schoolchildren injured in the bus accident on Thursday evening. | Photo:Republica

DADELDHURA/DOTI, Nov 23: At least 16 persons died and over 20 were injured when an overloaded school bus met with an accident at Raduwakhola of Amargadhi Municipality-11, in Dadeldhura on Thursday evening.

The bus was carrying 40 passengers, mostly schoolchildren, teachers, and a few locals.

The bus belonging to Peace Zone Academy School of Banedungrisain of Doti was returning after attending the annual Dehijat Fair in Ugratara Bhagawati Temple in Dadeldhura, according to DSP Dambar Bahadur KC. The bus fell some 300 meters from the road.

Ten of the victims died on the spot while six others succumbed while being rushed to the hospital, he said.

Nepal Army, Armed Police Force and Nepal Police personnel and locals were engaged in the rescue. The injured were rushed to the sub-regional hospital in Dadeldhura. Most of those injured are in critical condition and preparations are underway to send them to hospitals in Nepalgunj and Dhangadhi, police said.

Police suspect the bus met with the accident due to overload.

Meanwhile, the identities of the deceased had yet to be ascertained by the time this newspaper went to press.

DOTI, May 28: Three passengers died and nine others injured in a jeep accident at Gaguda of the district. ... Read More...

DOTI, April 21: Three passengers died and 16 others got injured in a jeep accident occurred today at Shikhar Municipality-3... Read More...

15 injured in road accident in Dadeldhura

DADELDHURA, Jan 12: As many as 15 passengers were injured, eight of them seriously, in a jeep accident at Simalpur... Read More...