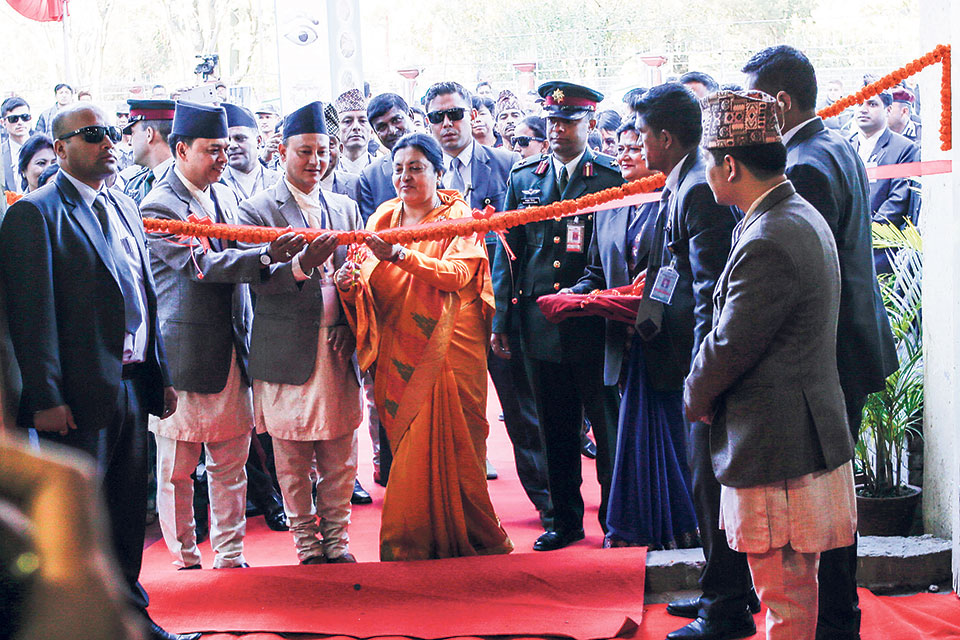 KATHMANDU, Nov 18: Fifteenth Handicraft Trade Fair, organized by the Federation of Handicraft Association of Nepal (FHAN), has kicked off at Bhrikuti Mandap Exhibition Hall in Kathmandu on Friday.

The fair, mainly supported by the Ministry of Commerce, has 10 pavilions and 200 stalls showcasing handicraft goods like wood carvings, ceramics, woolen clothes, accessories, and other handmade items from Nepal, Bangladesh, Bhutan, and China. Traders from China, Germany, Japan, and India are visiting the fair for buying Nepali handicrafts, according to the organizers.

“Nepali handicraft has greatly contributed to our national economy,” said Dharma Raj Shakya, president of FHAN. “Handicraft business has played a key role in providing employment opportunities to about one million people in various parts of the country, eventually contributing to poverty alleviation.”

“Our records reveal that handicrafts worth Rs 5.5 billion were exported from Nepal in the last fiscal year,” added Shakya. “Considering the high demand of Nepali handicrafts in foreign countries, if we receive support from government and other national and international agencies, we believe that the export can be increased upto Rs 10 billion in coming fiscal years.”

President Bidya Devi Bhandari stressed on the need for protection and promotion of Nepali culture by means of handicrafts. “Our handicrafts reflect our cultures and traditions,” said Bhandari. “We should hand these over to our coming generations, so such fairs carry a lot of importance.”

“Nepali handicrafts have been a boon to the national economy,” added Bhandari. “The FHAN should focus on promoting the handicraft sector and take it to a higher level.”

Traders in the fair were excited about their transactions in the five-day-long fair.

“This is our first time and we were given fifteen days’ training by the FHAN to make pottery items,” said Raj Bahadur Tharu Kumal from Dang.  “We are happy to display and trade arts of Tharu Kumal community from Dang.”

“We had stalls in this popular fair in previous years too, and this time, Poverty Alleviation Fund has helped us set up our stall,” said Chanda Limbu, a trader from eastern district of Terathum. “We are expecting big publicity of our Dhaka items in this fair.”

More than 300,000 visitors have been expected to visit the fair, based on the records of past years, said the organizers. Handicraft businesses with excellent trading performance in various categories were awarded by President Bhandari during the ceremony. Alongside the fair, 13th Craft Competition is also being organized by the FHAN, in which Nepali artists will compete with each other displaying their abilities in folk art, accessories making and so on. The FHAN has decided to award cash prize of Rs 50,000 to the winner of craft competition, while the first runner-up and the second runner-up will take home Rs 30,000 and Rs 20,000, respectively.