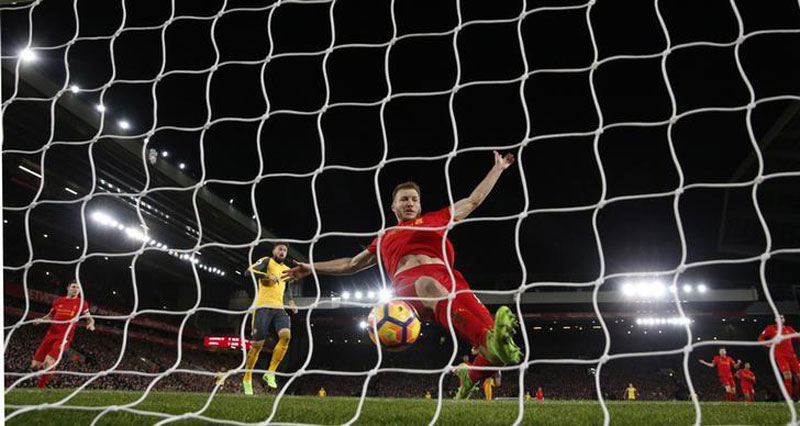 Arsenal will have to produce the biggest second leg comeback in a Champions League knockout tie to avoid a seventh successive exit at the last 16 stage when they host Bayern Munich on Tuesday.

A 5-1 trouncing in Bavaria left the Gunners facing mission impossible for the return leg and confidence is hardly soaring after a 3-1 defeat by Liverpool on Saturday left Arsene Wenger's team outside the Premier League's top four.

Stranger things have happened, if not in the Champions League where no team has ever recovered from a four-goal deficit in the second leg of a knockout tie.

To progress Arsenal will have to better the feat of Spaniards Deportivo La Coruna who recovered from a 4-1 loss away to AC Milan in 2004, winning 4-0 at home to reach the semis.

The last time a team overcame a four-goal deficit in European competition was Real Madrid in the 1985-86 UEFA Cup -- beating Borussia Moenchengladbach 4-0 at home after suffering, like Arsenal, a 5-1 defeat in Germany.

Few Arsenal fans will travel to the Emirates with much hope though and, rather than provide one of the greatest comebacks ever witnessed, the fixture is likely to provide another soapbox for the growing band who feel Wenger's era is close to the end.

Arsenal's capitulation in Munich, together with Premier League losses to Watford, Chelsea and Liverpool in their last four Premier League games have stretched the patience of even Wenger's most loyal disciples to breaking point.

His decision to leave Alexis Sanchez, Arsenal's leading scorer, on the bench against Liverpool puzzled many.

"I really can't understand the thinking behind that, why Arsene Wenger wouldn't want to play him. He's their best player," former defender Martin Keown said.

While Wenger will hope for a face-saving miracle against Bayern, he is probably already looking ahead to next weekend's FA Cup sixth round clash with fifth-tier Lincoln City.

After that it will be trying to salvage a 21st consecutive top-four finish in the Premier League.

Bayern, on the other hand, are buoyant after a 3-0 win at Cologne extended their Bundesliga lead to seven points.

Manager Carlo Ancelotti will not be taking anything for granted either having been victim of one of the competitions most astonishing comebacks when Liverpool beat Milan in the 2005 final after trailing 3-0 at halftime in Istanbul.

"We have to be highly focussed and, most importantly, show Arsenal in the first quarter-hour they can forget the next round," the fullback, who will retire at the end of the season, said.