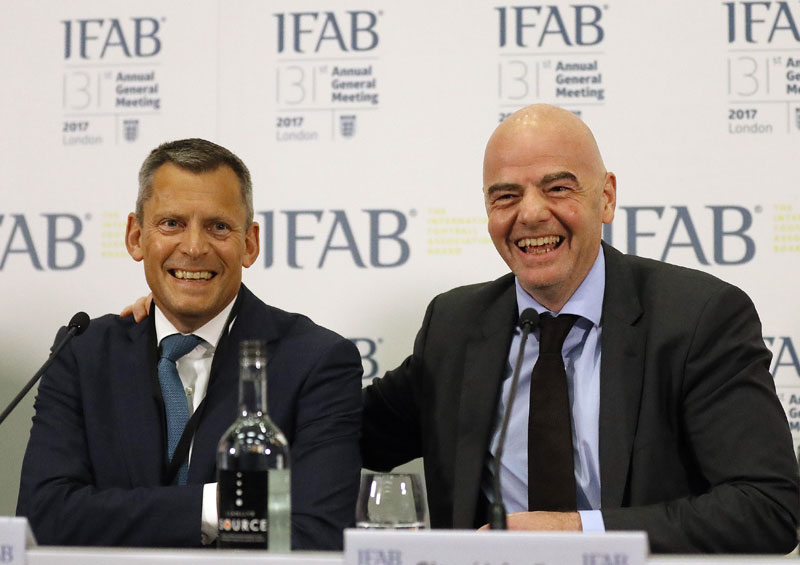 LONDON, March 4: Football's lawmakers are looking to make penalty shootouts even more unpredictable by adopting the format used for tiebreakers in tennis.

Teams currently alternate in shootouts, but the International Football Association Board says research shows the first team taking kicks has a 60 percent chance of winning.

IFAB is seeking trials in the lower-levels of football with a new pattern that would see the order mixed up between teams A and B to ABBAABBAAB. This mirrors tennis, where after the first point in tiebreaks — with the score 6-6 at the end of sets — the opponent then serves the next two points and so on.

"We believe that the ABBA approach could remove that statistical bias and this is something that we will now look to trial," Scottish Football Association chief executive Stewart Regan said after Friday's IFAB meeting. "It would mean the first 10 kicks are taken under the ABBA system and then when it gets to next-goal-wins then it would revert to alternate penalties."

There is a more immediate change coming to football on regular penalties in matches from June, with yellow cards no longer awarded for "stopping a promising attack" if there was a clear attempt to play the ball.

Meetings of IFAB, which features the four British nations and four FIFA voters, used to be dominated by discussions about technology. Having introduced goal-line technology in 2012, video replays are now closer to being sanctioned for use across the game.

Live experiments are taking place in around 20 competitions this year, including the Confederations Cup in Russia which serves as the 2018 World Cup test event. England plans to allow referees to defer to replays in the FA Cup next season from the third round in January when Premier League teams enter.

"There have been mistakes," Regan said. "What we don't want to do is roll it out into a major competition and actually find that it doesn't get bought into because people haven't got confidence in the decisions being made."

IFAB, once renowned as a conservative institution reluctant to change football, is now willing to offer flexibility to individual countries to tweak the laws. English Football Association chief executive Martin Glenn, who hosted the meeting, said IFAB should be the "football promotion organization, not the football prevention organization."

So temporary dismissals — known as sin bins in rugby — will be allowed for yellow card offenses in youth, grassroots and disability football.

"It encourages better behavior," Glenn said. "We can't put that in the elite end of the game because that has to look similar all over the world but the far bigger picture is — let countries try different things to promote football."

IFAB has also given national federations the freedom to decide how many substitutions are allowed in "lower levels of football," but not games involving the first teams of top-flight competitions and senior international sides.