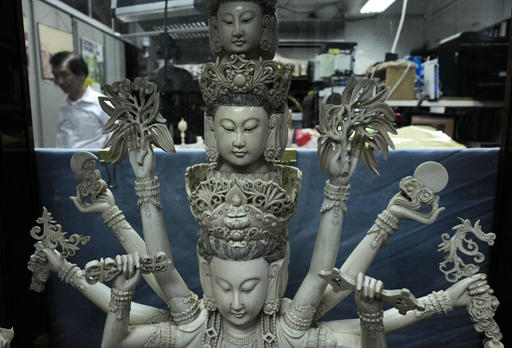 In this Jan. 13, 2017 photo, an ivory sculpture of the Chinese goddess Guanyin is displayed at Lise Carving and Jewellrey workshop in Hong Kong. Photo: AP

UNITED NATIONS, March 4: Interpol says a three-week operation to tackle the illegal trade in wildlife and timber in 43 countries has led to the seizure of $5.1 million worth of illicit products from wild cats to seahorses and the jailing of almost 90 people.

The operation, codenamed Thunderbird, was carried out jointly by police, customs and border agencies, along with environment, wildlife and forestry officials ahead of World Wildlife Day on Friday.

Its results put a spotlight on the increase in wildlife trafficking and the billions of dollars it generates annually in illegal profits.

"Simply put," said Interpol Secretary-General Jurgen Stock, "criminals are helping themselves to theenvironment's precious resources without a care for the cost to our planet."

He said in a statement that the success of the operation demonstrates what can be achieved by international cooperation.

The operation from Jan. 30 to Feb. 19 has already resulted in 370 investigations which have led to 89 people being jailed for terms ranging from several days to seven years, Interpol said.

According to Interpol, the seizures included 60 tons of wood and timber, 4,770 birds, 1,240 reptiles, 100 wild cats, 2.75 tons of pangolin scales, 2.5 tons of raw and processed ivory, 25 tons of various animal parts and 37,130 other products including medicines, ornaments and carvings.

World Wildlife Day, which was established in 2013, commemorates the adoption of the Convention on International Trade in Endangered Species of Wild Fauna and Flora known as CITES on March 3, 1973.

"Given the current rate of poaching and smuggling, will future generations one day speak of elephants, rhinoceros and many other endangered species as we speak of mammoths.?" CITES Secretary General John Scanlon asked at a U.N. event Friday marking the day . "We must not and will not allow this to happen."

KATHMANDU, May 19: The Department of National Parks and Wildlife Conservation (DNPWC) is preparing to destroy tons of wildlife parts and... Read More...