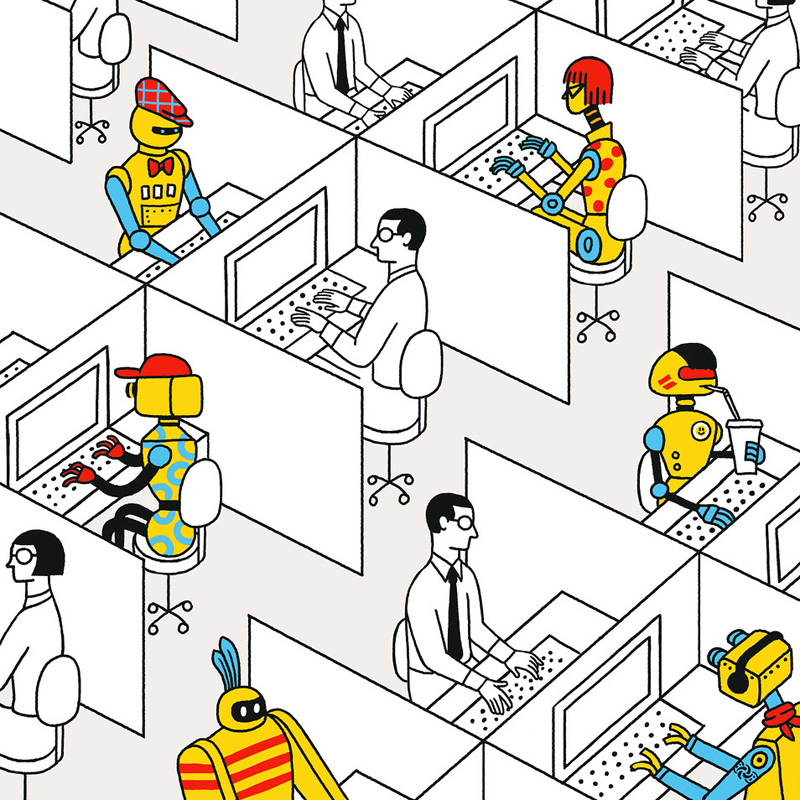 With the Robot Age on the horizon, representative democracy that we have now in Nepal will be replaced by direct democracy
Until Research in Motion changed the game with BlackBerry, it was necessary to carry two handheld devices—an alpha-numeric pager for text messaging and a bulky mobile phone for voice communication. In 2002, BlackBerry merged a messenger device with a mobile phone to invent the smartphone. The innovation was so admired by consumers that by 2007 more than 1 of every 3 new smartphone purchased in the US was a BlackBerry. However, as of February this year, BlackBerry’s global smartphone market share is less than 0.01 percent. Rapid technological change will continue to increase exponentially, disrupting established players in the process. The fate of our mainstream political parties in Nepal could also resemble that of BlackBerry if they do not change their modus operandi and make necessary changes at the policy level to prepare the country for the New Digital Age.

In less than a decade and a half, the company that invented the smartphone went from offering the hottest phone on the planet to becoming obsolete. BlackBerry’s demise came about as it was blindsided by the success of its smartphone and failed to notice the emerging threat from Apple and Google’s cutting-edge phone software and physical keyboard-less hardware. Instead of copying Apple and Google, BlackBerry chose nostalgia over innovation, offering outdated hardware with a backward-looking operating system. BlackBerry duly went out of business.

The governments worldwide also need to seriously think about adapting to the new digital order.

One area that needs immediate attention of policymakers is the employment sector. It is estimated that as much as 47 percent of jobs will disappear due to automation in the next 25 years. In Asia, Foxconn, the largest contract manufacturer famous for devices like iPhone, iPad, iPod, PlayStation 4 and Xbox One is already adding robotic workers in its factories. The company is installing robots costing 190,000 Euros at a rate of 30,000 per year. In the US, 8 out of 10 manufacturing jobs are lost due to automation. It is funny how Donald Trump blames immigrants, illegal aliens, and trade pacts for the job losses in the US, when in reality, automation and robots are to be blamed.

Yes, the prospect of automation taking away human jobs is alarming, but at the same time this disruption provides an opportunity to reorient our civilization to be smarter about many things including cities, food and the environment. We have to imagine a radical future to help human society adjust to the coming transformation of epic proportions. In the midst of this shift, one idea that has caught the world’s imagination is a concept known as universal basic income (UBI)—a periodic cash payment delivered unconditionally to all on an individual basis, without work requirement.
UBI sounds like a utopian dream, but many countries have already started testing the revolutionary idea. For instance, Finland is currently providing a “basic income” of 560 Euros a month to 2,000 unemployed Finns between 25 and 58. They are not entitled to unemployment benefits, but they will continue to receive basic income payment, whether or not they find work. Also, there are no age restrictions or obligations on how the money is to be spent. The Finnish government hopes this provision will encourage the unemployed to take part-time work. People tend to avoid taking part time jobs due to the fear of losing their unemployment benefits.

Finns are known for revolutionary social innovation. Therefore, it is logical for them to be the first to experiment with UBI. However, the UBI idea is not of Finnish origin. The concept of basic income was first proposed in the 18th century by a radical Englishman named Thomas Paine. He proposed paying 15 British Pounds to all 21-year-olds, funded through a tax on landowners. Since then, the idea has captured the imagination of many, but it was not until 2010 that the idea really caught the world by storm.

A growing number of politicians, bureaucrats, entrepreneurs and policy intellectuals now agree that basic income could be a potential solution to the problems of fragmented welfare state, extremely low pay, growing inequality, migration, crime, temporary jobs and massive exploitation. Finland, with a population of 5.5 million, has an 8.1 percent unemployment rate and the cost of providing basic income to the unemployed would amount to 20 Million Euros. So the million-dollar question is: How to pay for UBI? It’s not cheap to give every citizen unconditional income.

Last June, the Swiss people voted on a referendum that included a question about implementing UBI. The campaigners had proposed 2,500 Swiss francs (2,350 Euros) per month for adults and 625 Swiss francs (587 Euros) per month for children. Regrettably, Swiss voters overwhelmingly rejected the proposal. Nearly 77 percent opposed the plan, maybe because many are against using taxpayer money for UBI. The outcome of the referendum, however, does not mark the end of the idea, because the richest man in the world recently came up with a better solution to pay for UBI.

Bill Gates, the Microsoft mogul, believes in taxing the robots. According to Gates, a robot tax will be necessary and will have to be applied to the companies that are replacing human jobs with robots. It is highly likely that the unemployed workers and unions across the planet will revolt against the machine, forcing governments to ban companies from using robots. So Gates is saying it is better to tax companies employing robots rather than restrict them from using robots. I agree, in the sense that robot tax can be used to pay for UBI.

There is no doubt that Nepal will also have to one day deal with mass automation. Sadly, our politicians never touch on the subject in the media or in the parliament. If you tune into any Nepali radio or television station, you discover politicians of all stripes discussing ideas, values, and policies that are not suited to the 21st century. In short, their rhetoric is outdated. Many believe the mainstream political parties are neither radical nor revolutionary. I believe they are both, but by the standards of the last century.

Someday robots will be in the parliament and democracy will have to be re-invented then.

MUNICH – As the COVID-19 pandemic escalates, the risks inherent in global supply chains are more apparent than ever. Rather... Read More...

China backed Oli government with the hope that the alliance between the two powerful leftist parties would counter Indian influence in... Read More...