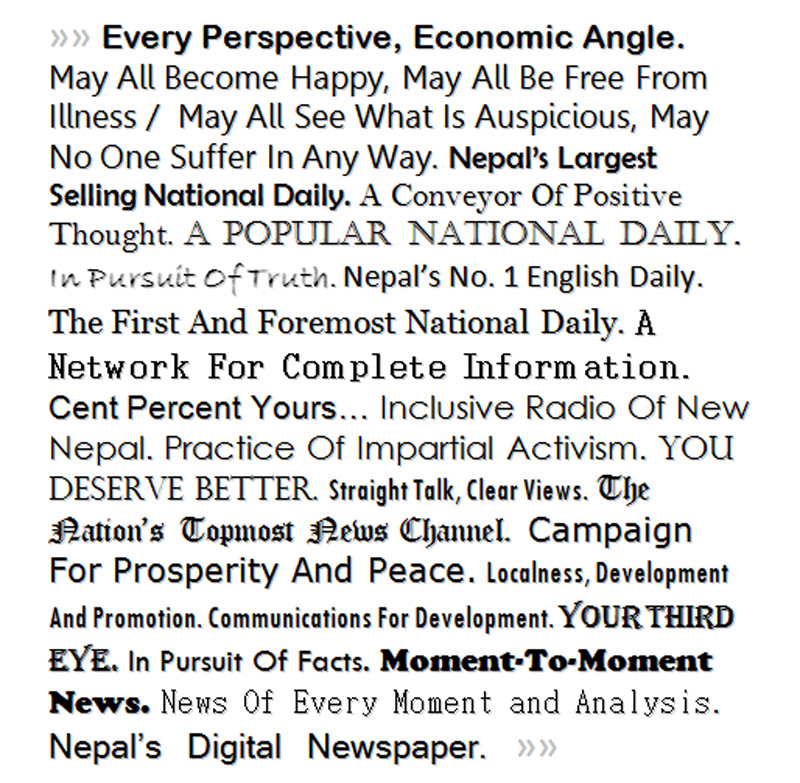 My interest was piqued when I noticed a number of our local tabloids, as slim as four pages, using the label “national daily”
The buzz over the Washington Post changing its motto on its website last week left me thinking about slogans used by our own news channels. I assure you, some of our news outlets offer nothing short of preposterous slogans, if not the dramatic one adopted by the Post: “Democracy Dies in Darkness”.  This is a powerful tagline in light of the increasing threat to press freedom in the US and its implications to democracy. At the same time, death and darkness evoke a gloomy picture anywhere in the world.

My interest in this issue was piqued originally when I noticed that a number of our local tabloids, as slim as four pages, invariably use the label “national daily” to describe themselves. These newspapers from Kathmandu as well as from the hinterlands know that “national” is a prestige tag worth adopting. Another matter of interest was that our competing national newspapers of repute describe themselves as the country’s “largest selling” publication.

Sometimes we get perturbed by the slogans of our news publications and channels mainly because mottos as slogans, or nara in Nepali, have a negative connotation in our culture. Slogans are usually heralds of political unrest and chaos and it gets hard to consider them as ideal statements, as more positive alternatives. They are often suspect of being dishonest.

Nonetheless, slogans are important for news outlets for they help to encapsulate their brand appeal and establish their identity in an overcrowded market. As mini-mission statements, ideally based on their institutional or professional values, they serve as guiding principles. These mottos also enable outlets to grab the attention of audience and shape the way users perceive their products. The striking, regular, repetitive and memorable use of a slogan over a period of time means that a motto (derived from “mutter”) becomes familiar and even believable, regardless of the veracity of the claim.

And these mottos have been around since antiquity in the form of catchphrases and taglines. The dense nature of Sanskrit owes to mantras and aphorisms, replete in that language and not uncommon even in our everyday life. Take, for instance, vasudhaiva kutumbakam (‘the world is one family’) or satyam shivam sundaram (‘truth is god and god is beautiful’). It is not a surprise to find some newspapers use these phrases as slogans, in both Nepal and India.

In fact, the first issue of Gorkhapatra adapted a Sanskrit verse into Nepali as its slogan, wishing everyone health and wellbeing as well as the reach of the newspaper to everyone and the resulting delight. Later, the newspaper used the Sanskrit verse, with a second level motto in Nepali extolling the virtues of entrepreneurship for the country’s development. The Rising Nepal’s original slogan (“Foremost English Daily”) focused on “positioning” itself among others such as the Commoner (“Independent Daily”) and the Motherland (“For King, Country and People”). Some weeklies like Chhalphal (“An Indelible Weekly of Opinion and News”) sounded as much impassioned as factual whereas others like Deshantar Weekly or Jana Astha showed no interest in printing any slogans.

Even to this day, some weeklies’ penchant for emotional resonance is striking, but there are others who are somewhat restrained or who shy away from slogans. Notice that People’s Review (“Let Nepal be Nepal”, “A Political and Business Weekly”, “Say No to Foreign Interference and Intimidation”) is triple-decker in its exhortative-descriptive slogans. Compare that to the Telegraph (“The Press and the Nation’s Democracy Rise and Fall Together”) or to Nepali Times (no slogan at all).

A close analysis of newspapers, wire or news services, broadcast channels and online news portals shows that slogans in use are overwhelmingly descriptive. Few outlets opt for persuasion and promise, or for direct emotive appeals.

The problem is that there is no clear basis to verify the inherent claims in some of the seemingly factual descriptions such as “positive thought”, “no. 1 daily”, “largest selling”, “most-read”, “positive thought”, “topmost channel”, etc. For instance, the Audit Bureau of Circulation has often been criticized for its lack of independence and objectivity in determining circulation figures of newspapers. What does it take in terms of geographic coverage, listenership, inclusion or multimedia use to be “the nation’s radio” or “Nepali voice” or a “digital” newspaper? Are the slogans accurate reflections of the business or just honest aspirations?

Another type of slogan appeals to emotions and goes further than speak to some subjective values as embedded in descriptive slogans. For instance,  Gorkhapatra (“May All Become Happy, May All be Free from Illness /  May All See What is Auspicious, May No One Suffer in Any Way”), Image FM (“Music of Your Life), Radio Mithila (“My Radio”), Times FM (“You Deserve Better”), and Sagarmatha TV (“Your Third Eye”).

Perhaps realizing this difficulty or being simply unconcerned with branding needs or potentials, a majority of outlets and channels in Nepal, including leading names like Annapurna Post, Nagarik, and Kantipur TV go without slogans. Some, like onlinekhabar.com, have even discarded their previously used mottos.

Apparently, we need to have further debate on the appropriateness and effectiveness of the mottos in use. Slogans in use are often hyperbolic, sweeping in their generalization, and rarely accurate, or creative. Sometimes competing mottos of individual outlets do not align well with the overarching slogan of an institution with multiple channels. And having more than one slogan, as in the case of RSS—“dissemination of information you can trust” and “a network for complete information”—dilutes the message easily and even undermines the organization’s current focus on “news”.

Moreover, stand-alone slogans are not enough in this digital age when the outlets’ websites are often the first welcome portals for users. Online use of slogans looks haphazard and crude. Meta descriptions of web pages often miss the opportunity to include mottos, or even fail to list complete brand names, thus making it not only impossible to recall the slogan but also to search for the site.

Have simple, direct, accurate, honest and measurable slogans. There is certainly much to be desired in reviewing and improving media mottos in Nepal.

Private hospitals in Kathmandu charging up to Rs 50,000 per bed a day for COVID-19 treatment
13 hours ago