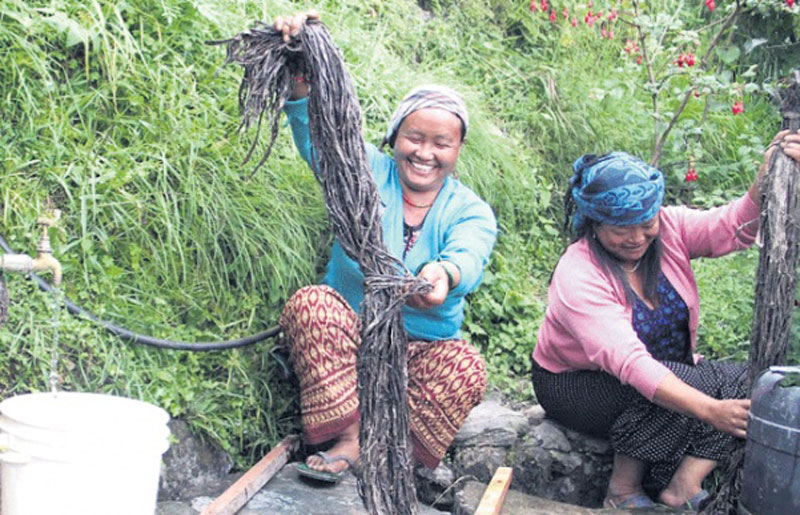 Women in Baglung, Parbat and Sindhuli districts have greatly increased their income from export of items made from allo
Economist Greg Mankiw’s principle that “trade can make everyone better off’’ can be explained in a number, with many examples of individuals and countries that depend on each other for goods and services. If we cut ourselves from the market, we need to grow our own food, make our own clothes and build our own houses. This will take time, effort and may be expensive. Many times, to produce everything that we need, on our own, is impossible. So trade allows every individual to do what he/she does best. In the same way nations can specialize in what they can do best.

A recent study shows that women in remote districts of Baglung, Parbat and Sindhuli have greatly increased their income from export of items made locally from Himalayan Nettle (Girardinia diversifolia) commonly known as Allo that is used to weave shawls, blankets, bags and clothes. Allo thread weaving has provided business and employment opportunities for countless landless and small-scale farmers. According to Handicraft Association of Nepal more than Rs 4.8million (US $56,753) worth of products made from Allo are exported annually to the international markets, which is 3.3 percent of the total textile products exported.

Not just that. Nepali handmade paper is a unique product, made mostly from lokta (Daphnebholua) plant fibers. This combination of lokta and argeli plant fibers is only available in Nepal. Its products include greeting cards, shopping bags, packing boxes, stationery sets, diaries and notebooks, photo albums, wrapping paper, photo frames and wall papers, among other things, which are exported to international markets.

Trade strengthens ties between nations by bringing people together in peaceful and mutually beneficial exchanges that contributes to peace and stability. For example, if we in Nepal are able to bring in more investment from India to make goods and services which can be exported back to India, the two countries will always be in good terms because of the opportunity cost associated with potential loss of trade.

Moreover, increasingly, international trade has made economies dependent on each other. The goods and services that developing countries may not be able to produce, such as high technology products and machinery, are brought from developed countries and are used to upgrade infrastructure and form new industries in developing countries.

Trade permits countries to specialize in products and commodities which they can produce relatively efficiently. Developing countries have comparative advantages in terms of lower labor cost and cheaper raw materials, which can contribute to their economic growth. Millions of people have come out of the poverty in Bangladesh, for instance, as the country was able to establish itself as the second largest exporter of readymade garments in the world. While Bangladesh has benefitted from its exports, importing developed countries also enjoy a higher standard of living due to cheaper imports. As a result, both the sides have higher incomes, more jobs and greater variety of products. In Bangladesh, more exports mean more income which can be invested into more sectors to create more products and jobs. While for developed countries, paying little for cloths means they have spare money to invest in productive sectors.

Nowadays trade takes places in ‘value chains’ too where the production process of goods and services are scattered in multiple countries. Take for example production of a car in one of the Association of Southeast Asian Nations (ASEAN) countries. Individual ASEAN countries specialize in production of specific car parts such as seats, engines, tires and so on. This production process benefits all the countries, as well as their laborers and everyone associated with the value chain. Because the most efficient ones take care of different parts of this car, they can do it in less time, effort and cost. Thus production cost decreases and the car is available in the market rather cheaply, resulting in huge welfare gains for the consumers and the whole economy.

Therefore countries should trade more. But there are a few things that need to be taken care of. For instance trade can create income inequality and exploit the poor if there are no complementary policies to check concentration of wealth in the hands of a few businessmen. The capacity of the poor should be enhanced to make them participate in the trade process. If we in Nepal can take care of these things, international trade can be a big boon for the country and its people.

KATHMANDU, Sept 30: Quality and efficiency of roads and airport have been identified as the priority areas for trade facilitation in... Read More...