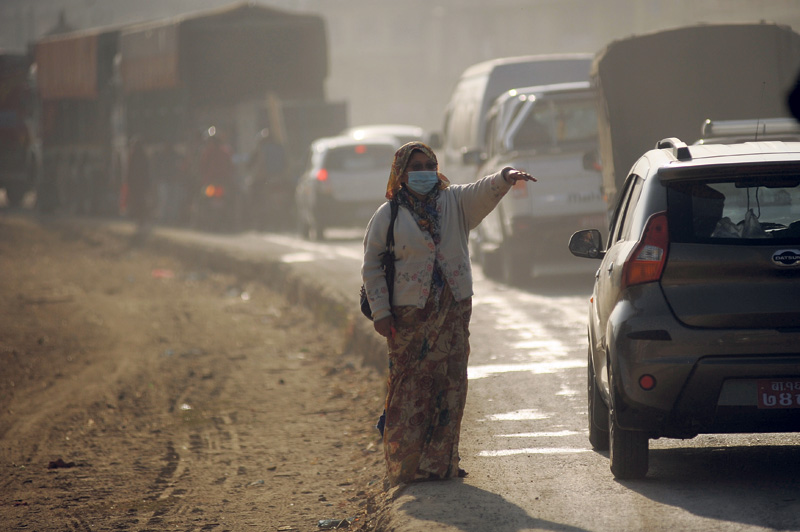 Kathmanduites speak out against pollution

Our capital city Kathmandu is now turning into Dustmandu. With the increase in pollution and dust in the air, irritation and other health problems are not uncommon among Kathmanduites. Republica talked to the people in Kathmandu to get their opinion on this issue.

Who do you think is responsible for the increasing pollution in Kathmandu? Have you faced any problem due to this? What is your take on people who use old vehicles and litter around the city? How can we reduce pollution?

I feel it is the responsibility of the Department of Road to reduce increasing pollution in Kathmandu. Yes, I have felt the change myself and have been facing health problems for weeks due to this increasing pollution. People throwing garbage around Kathmandu is making the situation even worse, turning it into Dustmandu. People should be punished, government used to fine Rs. 1000 to those who litter around the city but I feel that this rule is not executed properly. I feel we can solve this problem by making the road construction process more steady and using more electric vehicles.

I think we all are responsible for the increase in pollution. We can see old vehicles emitting carbon, brick kilns emitting carbon clouds, garment and other industries throwing waste and polluted water directly into the rivers. Our health is degrading day by day due to the polluted air; more people are suffering from hormonal imbalances like thyroid because of pollution. The media should play a greater part in educating people about the health hazard of pollution, misuse of plastics, pesticides and the government along with NGOs and INGOs should also play active role to create awareness. We should think about alternative methods to dispose waste. Government should make it compulsory to change old vehicles after every ten years which would discourage people to buy new ones and in the meantime more Sajha buses should run around at the cheapest price so that number of vehicles would decrease.

The increasing pollution in Kathmandu is the mutual negligence of the contractors of Melamchi, the government and the citizens. Melamchi contractors won the tender by setting lower price and when it came to the implementation, they even compromised the quality. On an individual level, we never question authority. We don’t even know the name of contractor who is in charge of even in our area. This has motivated the contractors to leave incomplete tasks and which has led to the air pollution. This has given rise to respiratory problems. People are using old vehicles due to inefficient law. The solution to this air pollution problem is only possible from a policy level. Firstly, government should be stringent against the clause set with the contractors and should always keep them in pressure. Public should be aware and active to put pressure if these problem rise. Also, the municipalities and other government bodies should be active in controlling the problem. They can water the roads time and again, both during the day and night. Also, different machines can be imported which can absorb pollutants.

I blame the government’s policies related to the installation of pipelines and repairing of the roads. Traffic congestion is increasing day by day, frowned faces of pedestrians clearly show their irritation, viral and communicable diseases are rapidly growing and the clothes get dirty soon. I feel people using old vehicles and litter around are uncivilized. They don’t think beyond their convenience despite education. Students from early on should be given practical education regarding environment so when they grow up they could come up with measures to solve environmental issue.

I firmly believe that change begins from us and all of us are responsible for the pollution in Kathmandu. We have all been consumed in our own lives that we seldom pay attention to what is going around us. Rather than expecting some active participation from the government, citizens should take up the initiative. Roads in all parts of the Valley have been bulldozed and obviously it is difficult to make than break. I suggest they finish off a segment of road and work forward as soon as possible. Pollution has brought health hazards in the society defoliating the beauty of the Valley. I think the use of old vehicles should be discouraged; the existing old vehicle should be well maintained or recycled for environment friendly use. Awareness campaign to promote environment friendly behavior should be organized. Provisions of fine will not be as effective as the awareness campaigns.

The roads that have been broken simultaneously but not been repaired for a long time has definitely created menace in Kathmandu. The lack of coordination between the Department of Water Supply and the Department of Roads has severely disturbed our streets. We also lack waste management sites in our metropolitan city, the drainage is mixed into the holy waters without any management. But it isn’t just government and its bodies that are responsible for it. Taking care of just our houses while we throw waste in the roads and public lands do not contribute towards our environment. This practice should be changed and all of us should be concerned about our environment. We should feel about taking care of our environment from within and it is possible through numerous social and media campaigns.  Rather than banning old vehicles, it would be effective if a standardized emission test was implemented. The solution for this problem would be to formulate strong laws and its effective implementation.

The unmanaged road system, unplanned Melamchi project and use of old vehicles seem to be contributing to the current transformation of the capital for the worse. The Melamchi Water Supply Project is indeed a progressive initiation, but the concerned authorities seem to have neglected possible health and environment risks. This has resulted in health hazards in town with reported increase in respiratory diseases in recent weeks. These diseases are making the activities run in an unproductive way – be it at workplaces or schools. But, it is not just the government who are to blame. We still choose to burn our household wastes because we think it doesn’t contribute to the already existing pollution. As it is each drop that makes a bucket full, we certainly are contributing our share of drops too! Foremost, this burning issue has to be realized by all. Only punishments won’t do any good in the long run. The people and the government – everyone needs to open their eyes and really see the blanket of dust surrounding us.

In my opinion, every citizen is responsible for increasing pollution in Kathmandu along with the government. The pollution has increased health problems. We are facilitated with street sweeping service, door-to-door waste collection, landfill sites and many awareness programs but they are not effective. My take on people who use old vehicles and litter around is not positive. They should be punished but before that they must be given a limited ultimatum to exchange their vehicles with new ones. We can solve this rising problem of pollution by increasing the use of electric vehicles and solar power.

Not the temples, nor the monasteries, palaces or even the historical architecture – it’s the all-permeating dust that has come... Read More...

Kathmandu to be made smoke and dust free

KATHMANDU, March 5: The term “dust” has become a common term among the inhabitants of Kathmandu  valley as if it... Read More...