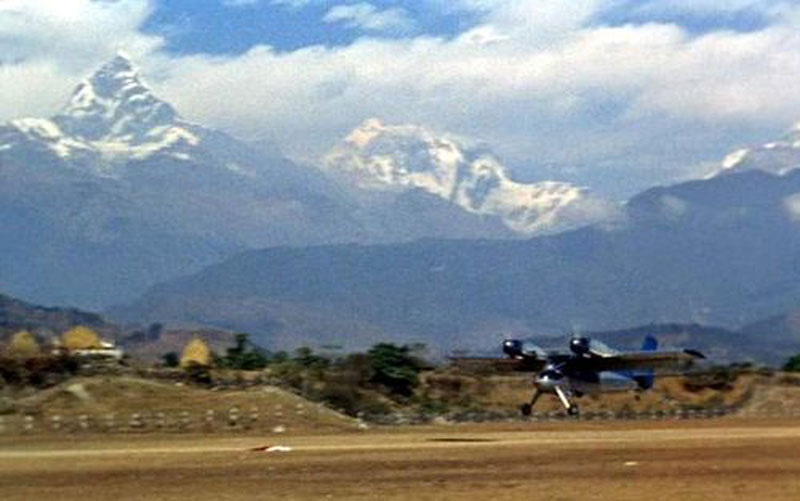 Our part of Mustang became strategically important for the joint Indo-American venture as it fell outside Indian boundary, as it was on the northern side of the Himalayan range and as it offered an easy access onto Tibetan plateau. Bigger aircrafts were used by the Americans to drop arms and trained infiltrators deep inside Tibet. The training of Tibetans took place in Colorado, US, and Saipan and Guam in the Pacific. The first of these recruits were trained by the CIA and parachuted into Tibet from B-17s that took off from Dhaka, East Pakistan then. Some entered through the Mustang region in Nepal. Others were parachuted out of the back of C-130s from afar locations.

Needless to say the information presented in this write up come from various sources available in the web. This scribe, as a child with keen interest in aircraft, had looked closely at the novel aircraft parked on the tarmac in Kathmandu. Naturally, its capability and purpose were not of much interest to me back then as much as the fact that the machine was right there in front of my eyes. With high wings, engines mounted much closer to the fuselage and with very big windows the Twin-Courier was a very different sort of aircraft compared to the more popular DC-3 (Dakota).

With engines mounted in this manner, laterally and over the nose, visibility was much improved to facilitate wider observation and even to take photographs. It was compatible for rough field operations with propeller positioned above and well clear of cabin doors.

With Americans involved in many development projects then, unlike at present, god knows how often H-500 landed in Nepal and what they did while the government was, as always, least suspicious about the American-Indian intent vis-à-vis the northern neighbor.

Returning to H-500, it was conceived as a “stall & spin proof safety plane”. It set a standard for STOL/slow speed maneuvering flight that is yet to be matched. It has truly distinguished itself as one of the finest and most versatile aircraft ever built. Only seven Twin Couriers were ever manufactured. It could seat just six (5+1) and first flew in 1960.

With 41 ft. wingspan and 32 ft. length it was less than 9 ft tall. Apparently because of its limited number and since none has survived till this date, there is dearth of information on this aircraft. The reply from its makers to a query from an enthusiast plainly says: “Unfortunately, we have very little information on the Twin Courier. There are no manufacturing records for these aircraft. They left the factory one day and were never seen again. Apparently all records either went with the aircraft or were destroyed”.

Those who knew it describe its amazing abilities. At the top end it had maximum speed of 161 knots while at the bottom end it was a different story altogether. Experts say H-500 practically eliminated “Velocity, minimum controllable” (Vmc) constraints. Vmc is the lowest speed at which you can control an aircraft in the event of one engine failure. At a speed lower then Vmc the aircraft will simply not respond to any command.

Twin Couriers could be flown on just one engine at minimum control speed of about 30 knots, without having to worry about losing positive control! Vmc is a number that cannot be dealt with lightly while flying. If you have altitude advantage then probably you can come out safely. But close to ground, your world will be turned into a heap of mangled metal as the aircraft acts unexpectedly. Those who have been lucky enough to come out alive in such close calls should thank their lucky stars.

It is no surprise that all seven H-500s were transferred to Indian ownership as the Americans scaled down their Tibet “misadventure” after the Ping-Pong diplomacy of early 1970s culminated in President Richard Nixon’s China visit in 1972. In conclusion, the Twin-Courier was a great creation and could still be used for “positive” work befitting its capability, if it was ever revived. There have in aviation been no other known aircraft matching such an incredible capability.

She recently admitted to having vaser liposuction to remove her 'lumps and bumps'. ... Read More...

Jose Mourinho blamed "incredible defensive mistakes" for his humiliation on his Premier League return to Stamford Bridge where his former... Read More...

COVID-19 test begins in Surkhet; starting from today in Hetauda from today
3 hours ago

NA plane lands in Brisbane carrying around 260 Australians from Nepal
6 hours ago
More than 8,000 foreign-returnees enter Karnali
6 hours ago