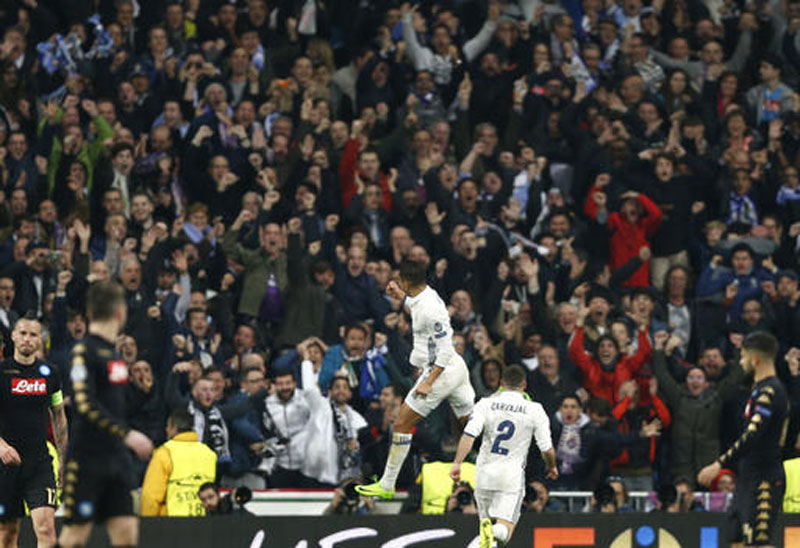 Casemiro celebrates after scoring his side's third goal during the Champions League round of 16, first leg match against Napoli at the Santiago Bernabeu stadium in Madrid. (Daniel Ochoa de Olza/Associated Press)

MADRID, Feb 16: The Real Madrid players kept their cool despite conceding a stunning early goal in the Champions League, producing an outstanding performance that kept the defending champions on track for a seventh straight appearance in the quarterfinals.

Madrid rallied to defeat Napoli 3-1 in the first leg of the Round of 16 on Wednesday. Karim Benzema, Toni Kroos and Casemiro all scored after Lorenzo Insigne's extraordinary goal for Napoli less than 10 minutes into the match at Santiago Bernabeu Stadium.

The Italian forward struck an unexpected shot from way outside the area, catching Madrid goalkeeper Keylor Navas out of position. But the visitors couldn't hold on to their lead against a Madrid team that delivered one of its best performances for weeks.

"We played a great game," Madrid coach Zinedine Zidane said. "It was a shame about the Napoli goal, but we recovered, scored ourselves and turned the game around."

"I'm happy with the result," Zidane added, already looking ahead to the return match on March 7. "We'll go there to a difficult ground where we'll suffer. It's still an open game. We need to go there and finish it off."

Playing in the last 16 for only the second time, Napoli was one game short of equaling its unbeaten record of 19 matches in all competitions. It hadn't lost since a 2-1 defeat by Juventus in Serie A last October, a streak that included 12 victories.

"We faced the best team in the world, but it's a pity that we made so many mistakes with the ball because we usually don't do that," Napoli coach Maurizio Sarri said. "I think Madrid played their best game in three months, while we were not at our best tonight — We can compete with them if we play our best football."

Madrid, which won its 11th Champions League title last season, extended its streak without a home loss in the European competition to 12 matches.

In the other Round of 16 game on Wednesday, Bayern Munich routed Arsenal 5-1 in Germany.

With former great Diego Maradona supporting from the tribunes, and nearly 5,000 fans loudly cheering from the stands, Napoli made an ideal start with Insigne opening the scoring with his superb long-range strike in the eighth minute.

He received a through-ball from captain Marek Hamsik and struck a first-time shot from about 30 meters (yards) out to catch Navas off-guard. The ball bounced once before hitting the net near the far post as Navas desperately tried to recover.

"Despite the result, I think we played a good game," Insigne said. "Now we have the return leg at the San Paolo Stadium and I'm sure that we will fight even more. Real Madrid are the worldchampions, a team with 18 phenomenal players in their squad, (but) I did not see such a huge difference as the result would suggest. Maybe we made too many mistakes — this will only push us to work even more."

Benzema leveled 10 minutes later with a header after a cross by Dani Carvajal from the right flank, scoring his first goal in six games and surpassing Thierry Henry as the French player with the most goals in Champions League history with 51.

Benzema, Madrid's top scorer in this season's Champions League with five goals, almost added another in a breakaway just before halftime, but his attempt struck the post.

Kroos put Madrid ahead from just inside the area in the 49th minute after Cristiano Ronaldo cleared a defender to set up the German midfielder. Casemiro sealed the victory with his perfectly struck volley from outside the area in the 54th, hitting the far corner.

Napoli had a goal disallowed for offside in the 80th.

"There is still a lot left to do," Casemiro said. "We know that they are dangerous when playing at their stadium. We have to maintain our calm and our focus."

Ronaldo had a great chance to score in the 28th minute, but his shot from close range sailed over the crossbar.

The star forward remains two goals short of becoming the first player to score 100 goals in European competitions. He is the Champions League's leading scorer with 95, two more than Messi.