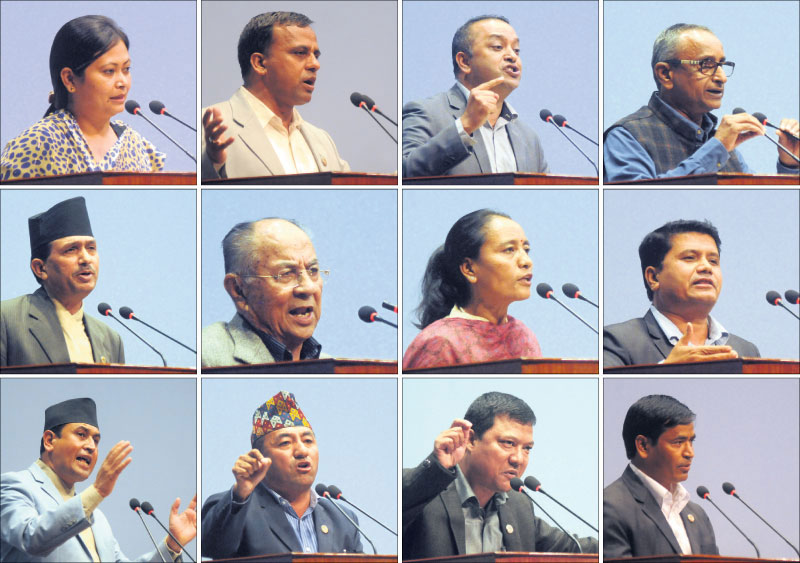 If the IRC quashes the motion, it will imply that the 157 MPs who petitioned for Lokman Singh Karki’s impeachment were wrong
The members of the Impeachment Recommendation Committee (IRC) are said to be divided on the issue of impeaching Lokman Singh Karki. The difference of opinions has surfaced after Karki was disqualified by the Supreme Court from holding the position of the Chief Commissioner of the CIAA. The IRC is an 11-member parliamentary committee, comprised of four members each from Nepali Congress and CPN-UML, two from CPN (Maoist Center) and one from RPP. The committee was formed after the impeachment motion was filed against Karki on October 19, 2016.

It has been reported that there is a sharp difference of opinion between IRC members from Congress and UML. NC members believe that since Karki has already been relieved of his duties, seeking his impeachment is a meaningless effort. How do you impeach an official who is already disqualified from holding that position?

However, UML committee members have a different view. They opine that the parliamentary motion should be viewed independently from the court verdict. Moreover, the court verdict does not include investigation into charges against Karki, nor does it carry sanctions for his possible abuses of authority during his stay in the CIAA. In the view of UML, the appointment review and the impeachment motion are two different issues: one related to qualification (appointment) and other related to performance (dismissal). Some UML members are even demanding investigation into officials responsible for Karki’s appointment in the first place.

There has already been considerable delay in resolving the impeachment issue. This is due to the stalling of the House by the opposition, as a way to express its displeasure with the constitution amendment bill. Now the motion is being handed to the IRC for review and further investigation. After seeking clarification from the defendant, the committee is expected to give its final decision within 30 days from the date of receiving the impeachment motion. The committee can decide on whether to quash the motion or place it for parliamentary voting. In a way it is a very powerful committee. However, after the court verdict and subsequent difference of opinion among its members, the committee is in a dilemma. With just 30 days at hand, there is not much time left for it to discuss the issue and arrive at a final decision.

To resolve the difference of opinions, the committee has sought advice from legal experts— from the Attorney General, to the Ministry of Law, Justice and Parliamentary Affairs and to the Law Commission. Officials from the law ministry and the law commission declined to offer their advice, citing conflict of interest. Now, after suggestions from the Attorney General, the committee has formed a three-member subcommittee which has been given 15 days to undertake a study on charges against Karki and offer suggestions to the IRC for a possible way out. The formation of the sub-committee could be a midway, face-saving gesture. But it cannot provide a definite outlet to the problem. Reading between the lines of the news coverage of the issue, IRC seems reluctant to move ahead with the impeachment motion. But at the same time, to satisfy UML members, it is also thinking of studying the charges against Karki.

Basically, the committee has three options. First, as UML members want, it can move ahead with the motion, leaving the matter up to the sovereign parliament. Second, it can quash the motion, citing its irrelevance in the context of the recent court verdict. Third, it can put the motion into deep freeze or literally doing nothing.

The formation of the sub-committee hints of the third option. The second option may sound logical given that the person to be impeached no longer holds his position.

However, this option runs the risk of the parliament decision being made subservient to judicial decision. Moreover, the issues at the disposal of the court and the parliament are different. Had they been related, the motion would not have been filed in the parliament in the first place.

The only sensible way out is to move ahead with the motion in line with UML thinking. But if the committee moves ahead, the motion runs the risk of being defeated in parliamentary voting. Earlier this scribe had written that if appointment of Karki was a mistake then his impeachment was a disaster in the making. Now, if the IRC quashes the motion, it will imply that the 157 MPs who petitioned for Karki’s impeachment were wrong. Karki may have lost his position but the parliament’s inability to move ahead with the impeachment motion implies that he is winning and that his actions while in office were correct.

The motion requires two-thirds majority in the parliament to pass. So without the support of Congress, the motion cannot pass. From the start Congress has been wishy-washy over the impeachment motion. It has preferred court decision over parliamentary voting. But it should understand that the failure of the parliament to pass the motion would send a wrong signal and could be even more dangerous for the health of our democracy than quashing it.

But this tricky situation is of our own making. Who knows, this could even be a test case for the implementation of new constitution. During court hearings, a lawyer was reportedly pleading that the issue of Karki’s appointment is political and should be left to the political body like the parliament. With the court annulling the appointment that was made three years and nine months ago, we have come to an absurd situation where: a) the appointee is disqualified while the person who appointed him still works as a qualified person; b) the appointee is disqualified but his decisions and actions are valid and qualified; and c) the parliamentary function is eclipsed by court verdict.

The important question that looms is: Why have we come to this pass? I think it is because of our unique way of making ad hoc, patchy and eleventh-hour decisions. Forget the conflict of interest amongst IRC members, forget the MPs who registered the impeachment motion, the IRC is yet to even appoint its chairperson.

KATHMANDU, Oct 24: The CPN (United) has decided to vote in support of the impeachment motion against the Commission for... Read More...

KATHMANDU, June27: The government had agreed to fix the ceiling of fee for MBBS studies in Kathmandu Valley up to... Read More...

Parliament restoration has taken the country to a fresh round of political instability: PM Oli
4 hours ago