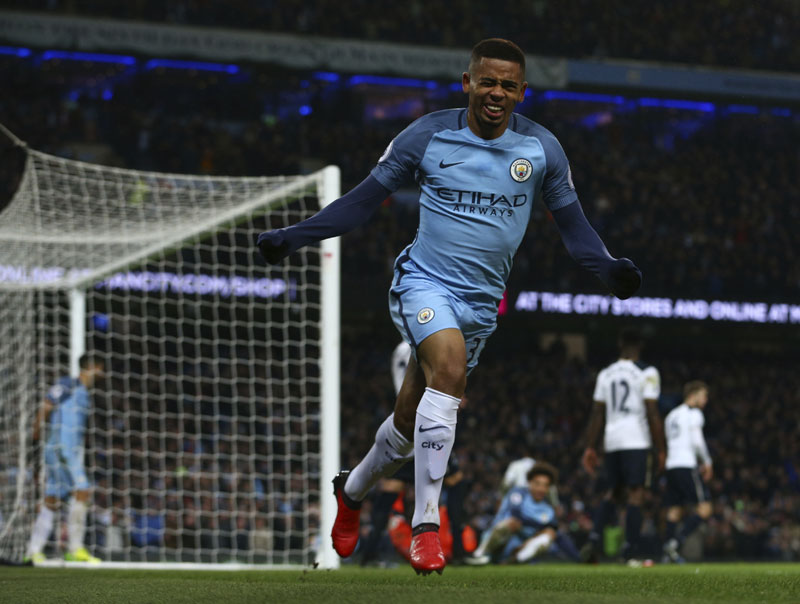 A point was salvaged for United but the moment carried a far greater significance. It was Rooney's 250th goal for United — a record breaker.

Rooney's long wait to overhaul Bobby Charlton as the club's all-time leading scorer ended in front of the 79-year-old former United great on Saturday at Stoke.

"It's a proud moment for me and a huge honor to get that record, just a bit dampened by the result," said the 31-year-old Rooney, whose side remains sixth in the Premier League after the 1-1 draw. "It's about a career and I still feel there's a lot more to come, but overall it's a really proud moment for me."

Inevitably the moment was tinged with disappointment for Charlton but not for long. Soon after the game, Charlton clambered down from his seat at Stoke into the United dressing room to congratulate Rooney.

"I have become used to the honor of being the club's all-time top goal scorer ... but it has been fairly obvious for a while now that Wayne Rooney was going to be the one likeliest to break my record," Charlton said.

"And now that day has come, I would be lying to say that I'm not disappointed to have lost the record. However, I can honestly say that I'm delighted for Wayne. He deserves his place in the history books."

Breaking records is one thing, now Rooney's priority will be hauling United up the standings. The failure to beat Stoke was even more costly as three of the five teams above them in action today all dropped points: Tottenham, Liverpool and Manchester City.

After uncharacteristic blunders by goalkeeper Hugo Lloris gifted City two goals at the start of the second half, Tottenham rediscovered the attacking threat missing in the first period.

Lloris resembled City counterpart Claudio Bravo, who for once wasn't the goalkeeper committing the mistakes.

Lloris raced off his line when Kevin De Bruyne ball sent a ball high over the Tottenham defense and went for a diving header to clear, rather than trying to make a save. The header went straight to Leroy Sane, who then had clear sight of goal to put City in front.

If that looked bad for Lloris, the next goal was even more mortifying for the captain. Lloris dived to gather Raheem Sterling's cross but he allowed the ball to slip through his fingers and De Bruyne was there to capitalize with a simple finish.

City's two-goal cushion only lasted until the 58th minute when Kyle Walker whipped in a cross from the right and Dele Alli headed in his 11th goal of the season.

City manager Pep Guardiola was left infuriated with the referee for not awarding a penalty when Sterling was pushed by defender Kyle Walker as he shot. Then Tottenham went up the other end to equalizer, with Son Heung-min set up by Harry Kane to clinch the point that moved the north London club a point ahead of third-place Liverpool.

Swansea climbed off the bottom and out of the relegation zone with a thrilling first Premier League win at Anfield.

Swansea forward Fernando Llorente saw his double canceled out by Roberto Firmino's pair of goals but Gylfi Sigurdsson produced a winner for Paul Clement's side.

Sam Allardyce is still waiting for his first league win since replacing Alan Pardew as Palace manager last month, with his side mired in a relegation dogfight. Seamus Coleman scored in the 87th minute to strengthen Everton's grip on seventh place as it chases Europa League qualification.

With Dimitri Payet seeking a move from West Ham, the east London club had to cope without its star midfielder for a second successive match. Just like last weekend, West Ham again emerged victorious.

Andy Carroll made it five goals in 10 league games with a double between Cristian Stuani's strike for Middlesbrough. Jonathan Calleri, who replaced Carroll midway through the second half, added a late third.

Sunderland sunk to the bottom of the standings after Darren Fletcher and Chris Brunt scored for West Brom.

"We are doing everything we can to stop it from happening but it's a disease we've got at the moment," Sunderland manager David Moyes said.

Bournemouth twice came from behind to snatch a point. Joshua King canceled out Christian Kabasele's header and, after Troy Deeney nodded Watford back in front, Benik Afobe produced the second equalizer in the 82nd minute.