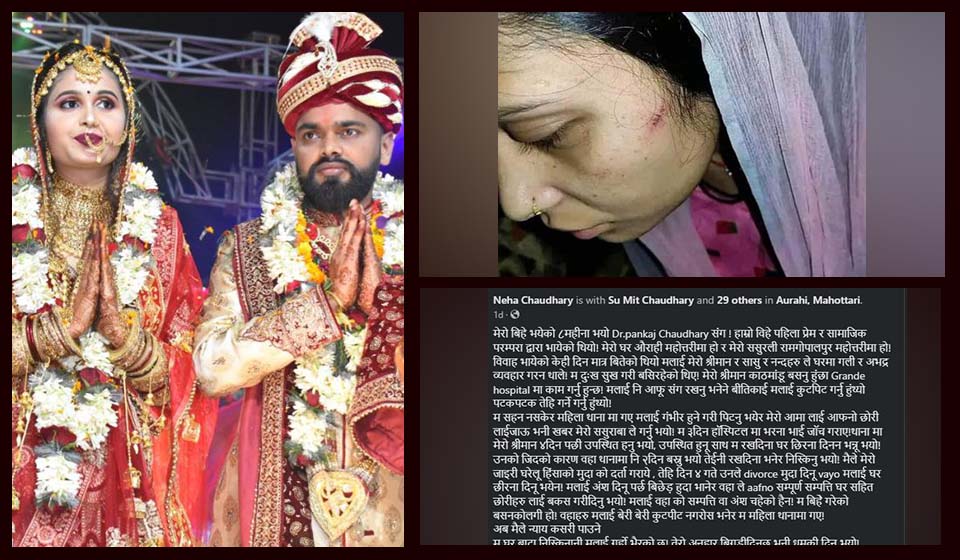 The story of Neha Chaudhary who was married just about eight months ago and has accused her husband, Grande Hospital doctor Pankaj Chaudhary, of abusing her, seems to be an apparent case of dowry-related violence. Neha has filed a report with the Mahottari district police who say they are waiting for the customary one-month period, expecting the chance of reconciliation between the couple, to end.

KATHMANDU, Nov 13: Neha Chaudhary, wife of Dr Pankaj Chaudhary, a doctor serving at Grande Hospital in the capital, has accused him of beating and abusing her.

According to Chaudhary, her husband and his family members began abusing her within a few days after her marriage. Writing a Facebook status on Saturday, Neha said, “Our marriage took place first through love and then by observing the social rituals and traditions. My maternal home is in Aurahi, Mahottari, and my husband’s home is in Ramgopalpur, Mahottari. Only a few days after the wedding, my husband, mother-in-law and sister-in-law (husband’s sister) began abusing me at home.” 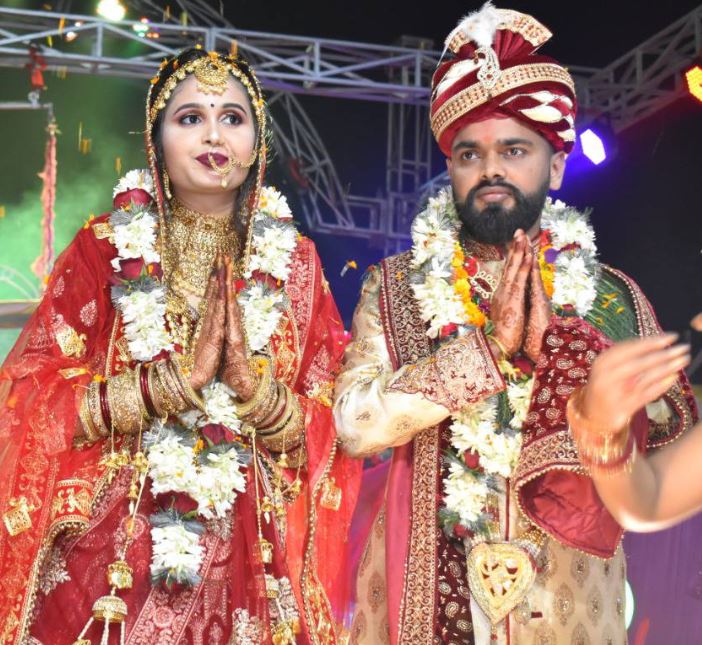 She has also mentioned that her husband lives in Kathmandu and works in Grande Hospital. She has claimed that when she asked him to take her to Kathmandu with him, he beat her time and again. “I could not bear the abuse and went to the women's police station to complain,” she has said.

Similarly, she has also mentioned that her father-in-law had called her mother to take her away. She claimed that she was hospitalized for three days due to severe beating. “My husband came to the police station after four days. However, he insisted that he would not allow me to stay home. Due to this, he stayed in the police station for two days,” she has mentioned in her post.

Chaudhary said that even after her husband was released by the police, he insisted that he would not allow her to enter his home. So, she filed a case of domestic violence against him, but, on the same day, her husband filed a case for divorce. She has also claimed that her in-laws have given property ownership to their daughters so that they don’t have to give her her share.

“In order to avoid giving me any property after the divorce, my family has transferred the ownership of all the property in the name of my in-laws. I don’t want any property. I married to live peacefully in my in-laws home. I even went to the police so that they do not beat me time and again. How can I get justice now?” 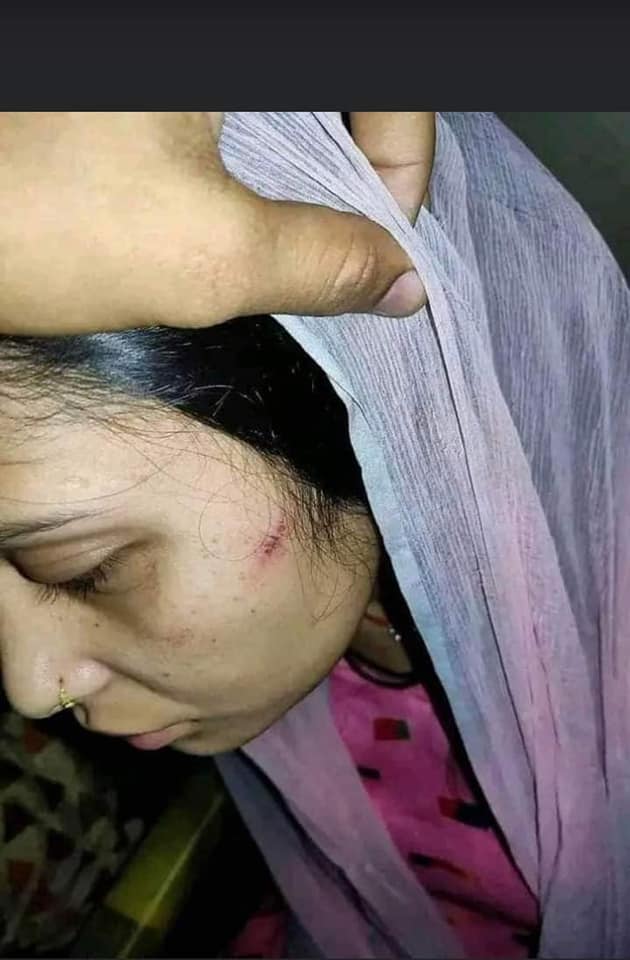 Neha's parents had spent Rs 12.5 million on the wedding

After the story was shared on social media, many people have re-shared it. The hashtag ‘Justice for Neha Chaudhary’ has gone viral. According to one of the posts shared with the said hashtag, Neha said that about Rs 12.5 million was spent on furniture, 20 tolas of gold, among other items, as per her in-laws’ wish. Similarly, it is said that her husband repeatedly asked her to buy a house in Kathmandu. “My husband would start beating me as he was easily influenced by my mother-in-law and sister-in-law. Due to this, I was injured severely in my stomach and I would bleed while urinating,” Neha has been quoted as saying. It has also mentioned that despite informing about the issue to her father-in-law and mother-in-law, they could not give any care. “My husband has threatened me to disfigure my face. I am living in fear in my maternal home at present.” 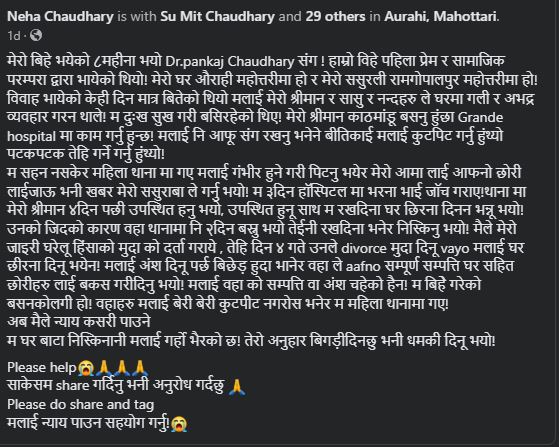 Madheshi Commission and Nepal Police HQ aware of the case

Meanwhile, the Madhesi Commission has written to the police headquarters with a request to immediately bring the culprits to justice regarding the case.

Rai also said that the case dates back to October 21. “As the case is registered as a domestic violence case, we will summon both parties for one month. However, if they don’t reconcile even by then, the case will go to court.”

Republica tried to contact Grande Hospital regarding Dr Pankaj Chaudhary. However, the hospital did not respond. 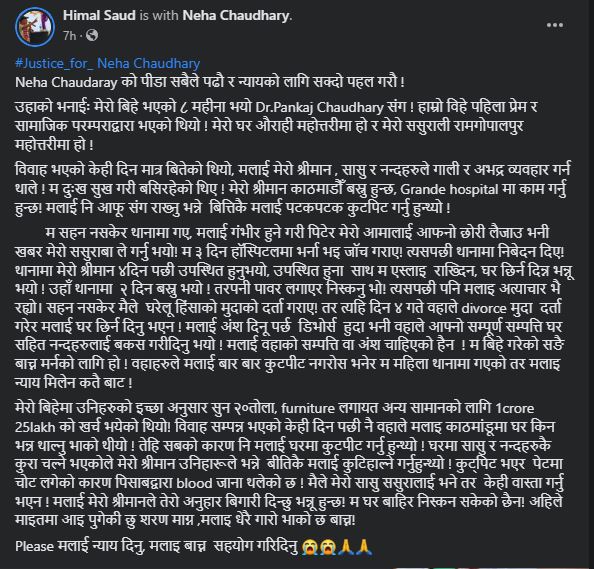 GAUSHALA: Taking over a domestic dispute, a woman has allegedly killed her two-year-old son before trying to attempt suicide. ... Read More...

The cost of domestic violence adds up to an astonishing 5.2 percent of global GDP each year ... Read More...

24 individuals felicitated for campaigning against child marriage and dowry system