132 die in Pakistan election violence ahead of Sharif return 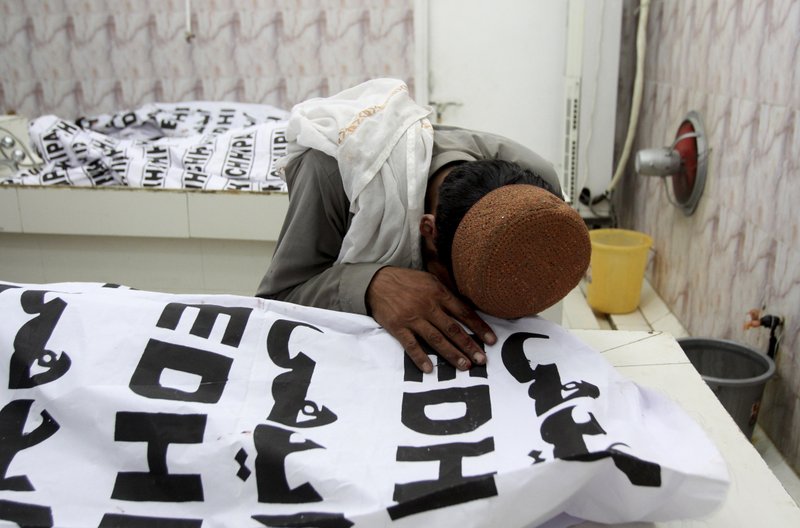 A Pakistani mourns over a dead body of his family member who is killed in a bomb attack, at a mortuary in Quetta, Pakistan, Friday, July 13, 2018. Underscoring the security threat, two bombs exploded Friday killing many people in the latest election related violence to hit Pakistan. The first bomb that killed four people exploded in northwest Pakistan near the election rally of a senior politician from an Islamist party who is running for parliament from the northwestern town of Bannu. (AP Photo/Arshad Butt)

LAHORE, July 14: The deadliest attacks in Pakistan’s troubled election campaign killed at least 132 people, including a candidate, on Friday just before the arrest of disgraced former Prime Minister Nawaz Sharif upon his return to the country.

In the southwestern province of Baluchistan, a suicide bomber killed 128 people, including a politician running for a provincial legislature. Four others died in a strike in Pakistan’s northwest, spreading panic in the country.

The attacks came hours before Sharif returned from London along with his daughter Maryam to face a 10-year prison sentence on corruption charges, anti-corruption officials said. Maryam Sharif faces seven years in jail.

He was taken into custody to serve his sentence however he is expected to appeal and seek bail. It wasn’t clear when his appeal would be filed but he has until Monday.

In the southern town of Mastung, candidate Siraj Raisani and 127 others died when a suicide bomber blew himself up amid scores of supporters who had gathered at a rally.

The Islamic State group claimed responsibility for the attack in a statement carried on its Aamaq news agency.

The group gave no reason for the bombing that killed Raisani, who was running for the election on the Baluchistan Awami Party ticket.

The U.S. State Department in a statement strongly condemned this week’s attacks on political candidates and their supporters in Pakistan.

“These attacks are cowardly attempts to deprive the Pakistani people of their democratic rights,” it said. “We will continue to stand with the people of Pakistan and the broader South Asia region in their fight against terrorism.”

Meanwhile, Sharif arrived in the eastern city of Lahore from London where he was visiting his ailing wife when a Pakistani court convicted him and his daughter of corruption.

Sharif’s son-in-law is currently serving his one-year prison sentence on the same charge, which stems from the purchase of luxury apartments in Britain that the court said were bought with illegally acquired money.

Ahead of his return, police swept through Lahore, arresting scores of Sharif’s Pakistan Muslim League party workers to prevent them from greeting him at the airport.

Barbed wire was strung across some roads leading to the Lahore airport on Friday and barricades were positioned at the roadside ready to close off main boulevards should crowds start to gather.

In a video message Friday reportedly from aboard his aircraft en route to Pakistan, Sharif said he was returning knowing he would be taken directly to prison.

Sharif has been banned from participating in politics, and his brother Shahbaz Sharif now heads his Pakistan Muslim League and is campaigning for re-election on July 25.

In a televised appeal to supporters from London earlier this week, Sharif said he was not afraid of prison and asked people to vote for his party. He also used the opportunity to again criticize Pakistan’s powerful military, which has ruled the country directly or indirectly for most of its 71-year history, saying Pakistan now has a “state above the state.”

During his term in office, Sharif criticized the military’s involvement in civilian affairs and its efforts in fighting extremists.

Pakistani and international rights groups have accused the military of seeking to maintain its influence in Pakistani politics by keeping Sharif out of power. The military denied the accusations saying their assistance in carrying out the elections was requested by Pakistan’s Election Commission. The army will deploy 350,000 security personnel to polling stations throughout the country on election day.

Underscoring the security threat, were Friday’s bombings the first of which killed four people in the northwest near the election rally of a senior politician from an Islamist party.

Durrani is running in the July 25 vote against popular former lawmaker Imran Khan. He is a candidate of Muttahida Majlis-e-Amal, an election alliance of radical religious groups.

The attacks came days after a suicide bomber dispatched by the Pakistani Taliban killed secular politician Haroon Ahmed Bilour and 20 others at his rally in the northwestern city of Peshawar.

Former lawmaker Imran Khan, who hopes to become the next prime minister, condemned Friday’s attack against his opponent, Durrani. In a tweet, he said there seems to be a conspiracy to sabotage the July 25 vote. But he said the people of Pakistan will not allow anything to prevent “historic” elections from taking place.