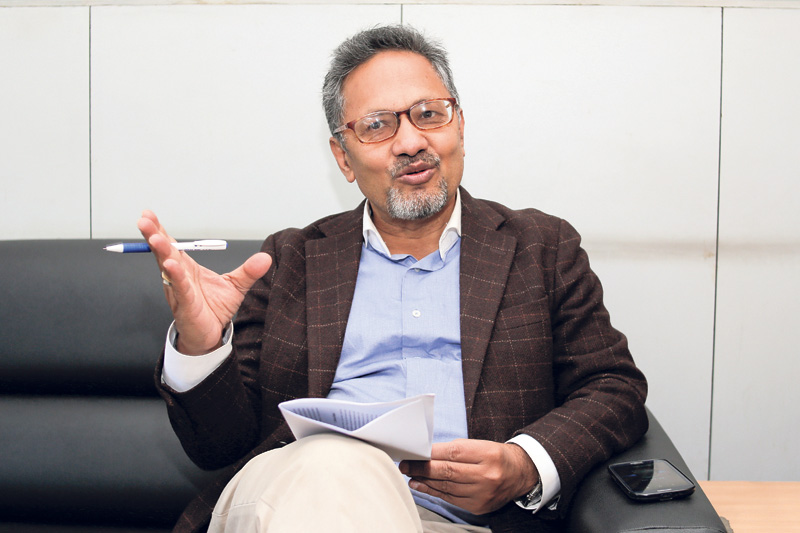 Technicians in government agencies have to work under constant pressure from the politicians. They have to approve the budget for roads without conducting any study and preparing strategy due to political pressure

Kathmandu is nearer to New Delhi than Dhangadi, the far-western city of Nepal, due to lack of proper connectivity. The remoteness has not only created trade and economic bottlenecks, but also created political gap between Kathmandu and the rest of the country which has, in some way, weakened national unity and sovereignty. Effective and efficient transport network or connectivity is not only the key to unite a country politically, socially and economically but also a base for a dynamic and prosperous country. Kuvera Chalise of Republica talked to Surya Raj Acharya, an engineer, planner and policy Analyst. He holds a PhD in Infrastructure and Regional Development from University of Tokyo. Excerpts:

Effective and efficient transport network is not only the key to unite a country politically, socially and economically but also a base for sovereignty. Isn't it time we discussed the issue seriously?
You have raised a very serious question. No one has thought of transport network as a base for national unity and sovereignty till now. Generally, connectivity is understood as connecting market with products for trade and business and commuters going from one place to another. Or it is understood as a comfortable transportation system. However, if we look it from the strategic angle, connectivity is the base for uniting a country politically, socially and economically. The current trend of regionalism in Nepal is also the byproduct of the lack of connectivity. The better the connectivity, the stronger the national unity and sovereignty is. But we took the issue lightly and understood it as a means of connecting district headquarters only. Our planners have failed to take the connectivity issue in a strategic manner.

But in Nepal, we have failed to do so. Forget about taking connectivity and transpiration as a base for national unity, our planners have failed to link connectivity with agriculture development, tourism development and industrial development. We are only focused on building roads that too in a haphazard manner. We can see roads being built in remote villages without any proper planning.

But the government allocates substantial budget for road construction and updates data of newly built roads in economic survey?
There are two types of planning; top-down and bottom-up. It is obvious that people's wishes should be fulfilled. But in the name of fulfilling people's wishes, local politicians and lawmakers try to increase their influence and spend budget on petty road projects of Rs 200,000 and Rs 500,000. Construction of such roads, without proper planning and technical study, is on the rise. Such roads do not and cannot contribute to the local or national economy. Rather they increase the risk of accidents.

Where have our planners missed?
Sadly, we still do not have national highway master plan. Technicians in government agencies have to work under constant pressure from the politicians. They have to approve the budget for roads without conducting any study and preparing strategy due to political pressure. They are also compelled to approve the roads without basic technical study.

Ideally, we need to have a national transport network master plan, and it should be revised and reviewed every 10 or 15 or 20 years. We could have set the priority and start implementing the plan in a phase wise manner. Sadly, we do not have the master plan.

But the government claims that it has been able to increase road network across the country?
People's aspirations have increased in recent years. They want roads to pass by their house which may not be wrong. But such aspirations have to be matched through national planning with proper technical study. Roads constructed because of people's pressure without any engineering are more dangerous. According to government documents also, we have non-engineering type roads which are very dangerous to travel through. We are allowing vehicles to ply on roads with only tracks opened which is again dangerous. Such roads do not meet even minimum technical standards. Mere increase in kilometers (of such roads) is not going to help in the long run. It's just waste of resources.

Are only the politicians to be blamed for the current mess?
No, our designers are also responsible. They also have to be more responsible. They cannot resist political pressure and let commercial vehicles ply on non-engineering roads.

There has been lot of controversies in the fast-track project. Why such hue and cry?
First of all, we have to be clear on public-private-partnership (PPP) model. We also have to be clear on whether we want private sector in infrastructure development. The governments started inviting private sector in infrastructure developed since 80s as they started facing budget crunch due to increased social investments. In Nepal too, we have allowed independent power producers to generate electricity after the Nepal Electricity Authority (NEA) guaranteed the market with Power Purchase Agreement (PPA).  But PPP in transport infrastructure has become successful in some countries and failed in others. The politicians also misunderstood the PPP model. They thought that the private sector will do everything and they have to do nothing. Private sector was invited as they are efficient, cost effective and complete the projects on time compared to the government agencies.

The PPP model in the fast-track project was a wrong concept. Fast-track is not a profitable venture, according to various studies. So, the government was forced to guarantee revenue, and set a huge toll fee for consumers.