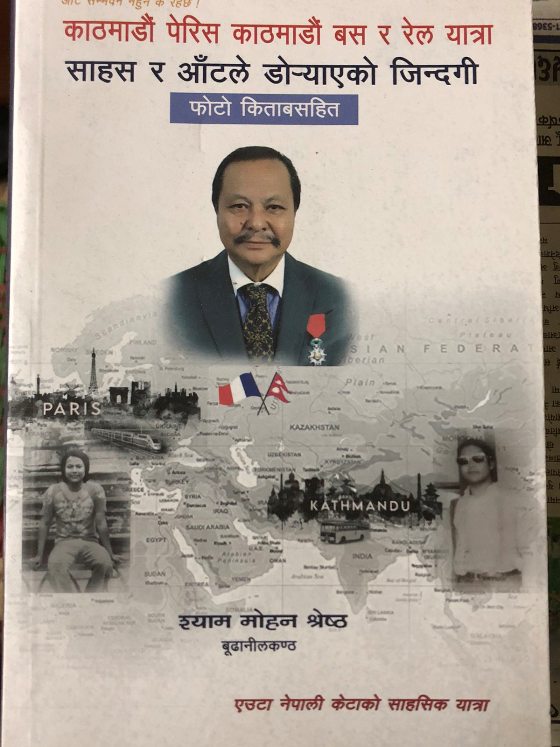 Kathmandu-Paris-Kathmandu, a delightful travelogue in Nepali language, has so well captured the hilarious life of a young Nepali boy and his dreams come to a reality. When the boy decided that he wanted to travel through the world, who would (not) believe him? Whether one believed him or not, it didn’t bother much to Shyam Mohan Shrestha who comes from a lower middle-class household that allowed him to harbor foreign dreams. Written in first-person narrative, and through this autobiography of a young explorer, the author unfolds his journey to an unfamiliar land from Nepal during his youth. The young man pursued his passions of following French and American travelers in Kathmandu during the late 1960s, and finally set off on the journey to fulfill the dreams. He put in one month to reach France and continues to show certainty towards his dreams.

Being very enthusiastic in exploration of the foreign lands right from a young age, the author journeys towards Paris from Kathmandu in the early 70s. He had, as well, an unyielding determination that one day he will definitely write about his journey. Now, this mission that Shyam Mohan Shrestha started 50 years ago completes with the publication of a book. The author has unveiled his encounters, twists, turns and junctures of life lessons that he recollected from countries like India, Pakistan, Afghanistan, Iran, Turkey, Yugoslavia, Italy, and France.

It may be hard for many people to remember what had happened in their life a few years ago. Yet, the author’s reflection of each minute detail of the last five decades has been the major highlight of this book. The book portrays a detailed description of his journey from Kathmandu to Paris, and back to Nepal using bus and train. The traveler was quietly documenting his entire trip with prominent photographs. There are several interesting instances in the book such as the author being trapped by a German traveler, who offered a $ 10 help to buy an air ticket from New Delhi to Kabul, and many more.

Brought up in a lower middle Newar family in Kathmandu, the author has revealed that he was never interested in his academic activities, But he kept on trying everything he found around him, be it working with an American PhD scholar for translation job,  or in a casino or  an airline. He did not hesitate to travel to India to knock on the door of Air France, asking them to give him a job. Unlike many people, who have achieved greater success in life and may not reveal much about their hardships and weaknesses, the author has honestly shared how he could not sustain in business like the Mirabel Hotel in Dhulikhel, and how some lucrative projects such as Thankot-Bhimphedi-Hetauda cable car were never complete.

Shyam was able to experience multidimensional lifestyles, and established continuous relations, especially with the people from tourism and aviation industries. Shyam, who also received one of the highest medals of France “The Legion of Honor” (Chevalierdans l’ordre dela national de la Légion d'honneur), always had a profound interest in French language and was influenced by French culture.

Like Paulo Coelho’s The Alchemist, Kathmandu-Paris-Kathmandu also weaves around the fairy tales of the roots and wings of a young boy. The book is an easy read for young and elderly people; they can feel a kind of close association with the events and characters they meet along the reading. The ultimate message of the book is that by following our dreams, the doors of opportunities will open and the path takes forward in finding the true meaning of life. The book has much more insights to offer to the young entrepreneurs, adventure lovers, enthusiastic explorers, and those who have interest in people and culture.

Number of pages: 331 and pictures

Development in Nepal: Keep head on horizon and hands on land

The gist of the book is that Nepal should embrace the green economy development model to benefit from its vast... Read More...