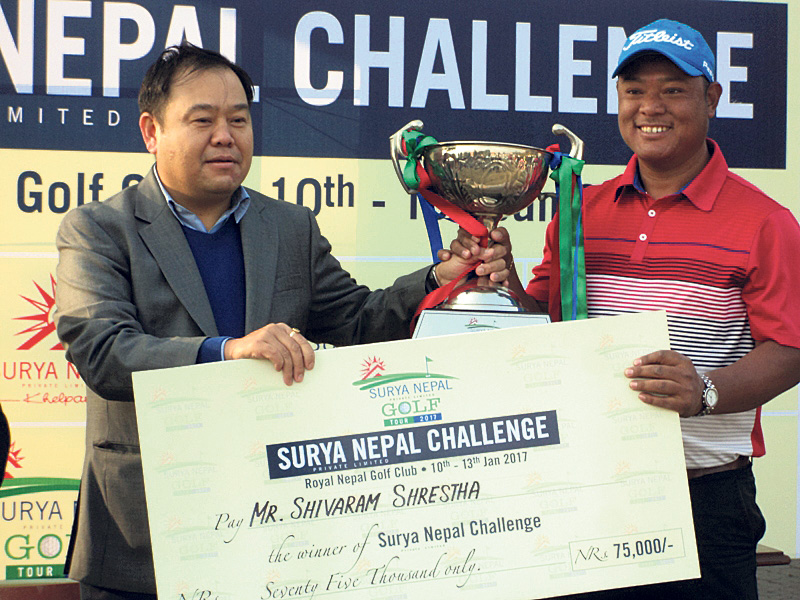 Shivaram Shrestha (R) poses with his winner's trophy and check with Bal Krishna Gurung, the marketing manager of Surya Nepal Pvt Ltd, in the capital on Friday. Photo Courtesy: RNGC

The RNGC pro Shivaram carded four-under 64 in the final round to finish with total score of eight-under 264. He left behind his closest opponent Bhuwan Nagarkoti of Gokarna Golf Club by 10 strokes. Following his second tour title of the season, Shivaram also lifted overall 32 major trophies. As the winner he also received a check of Rs 75,000.

Bhuwan, who carded two-over 70 for a total score of two-over 274, toppled Jayaram Shrestha from the second position and went richer by Rs 46,000.

Chuda Bahadur Bhandari, Dhana Bahadur Thapa and Deepak Magar were joint seventh place finishers and received Rs 17,333 each. Surya Prasad Sharma finished 10th at 284 and had his share of Rs 15,000.

Shivaram began the final day with two-stroke advantage over his elder brother Jayaram and four-stroke ahead of Bhuwan. He extended it by one more shot after front nine holes.

Shivaram played one-over 35, while Jayaram shot two-over 36 and Bhuwan carded even-par 34 on the front nine. In the later half, Shivaram finished with an impressive figure of five-under 29 for the comfortable win. His closest rival Jayaram slipped to third after he shot four-over 38 while Bhuwan played two-over 36 for the second place finish.

Shivaram dropped a shot each on the second and fourth holes against a lone birdie on the fifth before taking the turn. He not only remained bogey-free on the back nine but also sank eagle on the 15th hole besides birdies on the 10th, 11th and 17th holes. Bhuwan began the day with a birdie and faced a bogey on the eighth hole before taking the turn at 34. In the later half, he made a lone birdie on the 11th hole against bogeys on the 12th, 14th and 15th holes. Jayaram faced bogeys on the fourth, seventh and eighth holes against birdie on the fifth hole. After taking the turn, he faced triple bogey on par-three 14th hole and double bogey on par-three following hole. He birdied on the 13th hole.

The amateur section saw Santosh Rokka lifting his maiden trophy of the tour with a total score of 19-over 291 despite finishing the final round at seven-over 75. Meanwhile, Jiwan Rai (70) of Dharan enjoyed a Hole-in-One on par-three 14th hole to wrap up at 292 for second position. Overnight leader Mithun Rai (78) slipped to third at 293.

Altogether 40 players including 29 pros and 11 amateurs took part in the second tournament of 2016/17 tour. The cut was applied after second round which saw 22 pros and six amateurs make to the final two rounds. The tournament carried total cash prize of Rs 400,000 and all the 22 pros received their share in cash prizes.