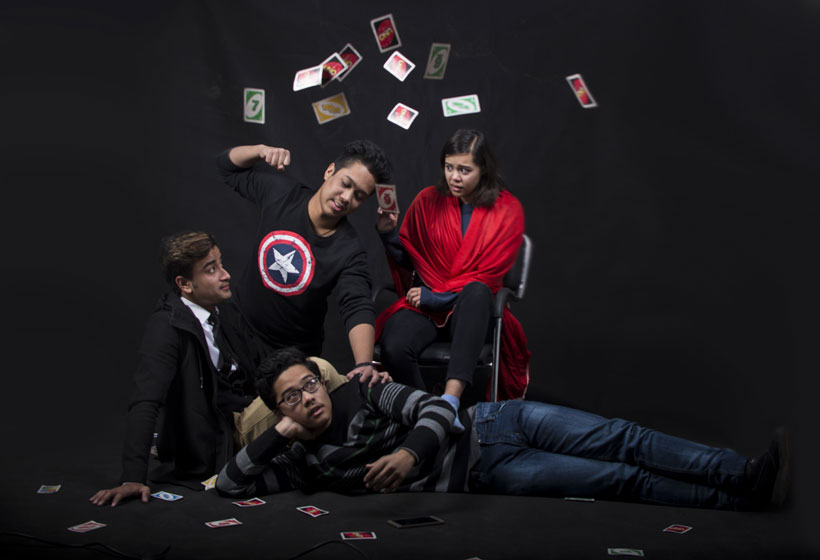 While, in the recent times, theater in Nepal is booming with great actors, unique new plays, and good response from the audience, the educational system of our country too has been staging some really good dramas and coming up with interesting projects. The Week’s Reya Shreya Rai speaks to some new faces of theater from different colleges around the capital on what theater means to them, what goes on backstage, and their future plans.

Saugat Basnet
A graduate of ACE college, Saugat is currently studying at Islington College. He played the part of an angry lover boy in Sunkesari.

Acting has always made me happy and the opportunity to perform in front of others is really exciting. That’s what I love most about being on stage, and perhaps the main reason why I continue to be a part of theater even today. Also, theater, to a large extent, has helped me understand the meaning of life. It has helped me get a better grasp of different perspectives, and when you are able to do that you emerge stronger and happier.

What goes on behind the makings of a play?

When I first decided to start, there were acting related games that we participated in that helped bring out the hidden actor in me. These games also served as icebreakers and made the team members comfortable with one another. I started to research about the characters I had to portray so that I’d be able to put myself in certain circumstances and act as my character would. As you go along, you have to work on your skills and practice, as well as learn to coordinate with others. As the chorus team plays a vital role to connect and give flow to the play, I believe they are one of the major pillars of any play. It is hard work and countless rehearsals that bring out the best results. ‘We joke while working, but we don’t joke with our work’, the slogan of the team at Mandala theater and ACE college, nicely sums up how theater works.

Tell us about your most difficult moment so far as an actor?

The hardest moment had to be the time when I had to show my struggles in a scene that depicted my journey to reach my beloved. I had to portray my struggle by going through caves, climbing hills, swimming across rivers, and so on. I had to act out those scenes with safety precautions. Even after many rehearsals, when the time came to finally perform these acts, I cut my leg on a bamboo prop. It was the chorus team who had to hold my weight on their shoulders that did most of the work for me.

Do you see yourself in this field in the long run?

People who have seen me perform have appreciated my work and complimented me on my acting skills. The feedback has really helped me grow as an actor, and I want to further hone my skills. Also, acting makes me happy and theater has shaped me as a person. It’s now a part of who I am. I would definitely like to continue being a part of theater in the future too.

Mohit Lal Shrestha
Mohit is a +2 student at St. Xavier’s. He was Alan Dangle in One Man Two Guvnors.

I had never thought I would be a part of any play in my life. However, our school St. Xavier’s used to put up really good shows every year. There was this one specific play named ‘West Side Story’. It was so good that it gave me a strong sense of clarity. It really struck a chord with me and I felt that I too could express myself through acting. That’s when I made up my mind about getting on that stage one day. Through acting, I have learnt a lot about myself.

What goes behind the makings of the play?

Coordination is the key for the success of any play. Your co-stars, directors, set directors, and stage crew become your family. The play is not only about you. You will have to work as a team and each individual has to do the best s/he can. When even one falters, the entire package suffers. It takes a lot of effort and every person involved has to do their best to put up a good show.

Tell us about the biggest hurdle you have faced so far as an actor?

Sometimes you tend to do more than what is asked for, and sometimes you’re not doing enough. I wasn’t consistent while performing. Each time I performed a certain scene I would carry it out in different ways. Then I realized that I needed to understand the character better and stick to one way of communicating feelings. The major obstacle I’ve had to overcome is immaturity, as you don’t want to accept you are wrong when you are young.

Tell us about your proudest moment as an actor? Are you thinking of pursuing this as a career?

Seeing strangers applauding and appreciating you makes you feel really proud. So you can say that I’m proud every time we put up a good show. You also feel proud when you are able to do justice to your role, and I feel that I did justice to ‘Alan’ in ‘One Man Two Guvnors’. Honestly speaking, I haven’t thought much about pursuing acting as a career but I do know that I won’t be giving it up anytime soon. I love entertaining people and I’ll do my best for as long as I can.

Anushka Upadhyay
Anushka is currently pursuing her second year of IB at Ullens School. She has acted in Property Rites by Alan Haehnel and Rumors by Neil Simon.

I don’t think I could say I ‘chose’ theater. It’s always been something that has had its presence in my life. At Rato Bangala, we used to have annual assemblies where it was mandatory for everyone to have a role in one of the several plays—so it was never a question of choosing theater over anything else but rather about exploring the different roles we got and enjoying it. I was lucky enough to be cast in lead roles a few times and, over the years, my love for theater grew. It was only when I started IB at Ullens that I started studying theater as a subject, and then participated in full-scale theater productions.

What goes behind the makings of a play?

A theater production has many components. I can’t claim that I want to act tomorrow and expect a top-notch production to be readied immediately. What the audience doesn’t see are the months of hard work everybody puts in before these shows. So it’s really all about each and every member—be it cast or crew—coming together and working as a team. It’s like the group projects we have at school, but you can’t depend on one person to cover up for your negligence.

Tell us about the biggest hurdle you have faced so far as an actor?

I suppose each production has its own hurdle but the biggest hurdle in theater, I believe, at least on the actor’s part, is definitely memorizing all the lines. It is especially difficult when you are a student and you have all your assignments and projects to complete as well. It’s really hard to find that balance between schoolwork and theater and devote enough time to both. However, our teachers are extremely supportive and support our passion for theater by understanding and motivating us.

What has been your proudest moment so far as an actor? Do you plan on pursuing theater as a career?

You feel proud about a lot of things when working on a theater production. I got really close with the cast of Rumors, our latest IB production, and I’m proud of the smallest of accomplishments. After our first show of Rumors, the crowd cheered really loudly and all the cast members were grinning ear to ear as they took the finally bow. There was that feeling of a job well done. That was a really happy and proud moment for me.

about theater  and I believe I’ll always be involved in the theater scene but I also think I’ll go for a different career as a fall back option. I haven’t decided yet, but that’s what college is for.

Susraya Tuladhar
Susraya currently pursuing his +2 at Xavier’s Academy. He appeared as Mufasa in The Lion King.

Malpi, where I went to school, has always put up good plays and the atmosphere was always charged with tension running high because of the standards we set for ourselves. When you grow up in that kind of environment, it’s hard not to be affected by it. Theater has made me more confident. I don’t shy out from expressing myself anymore.

How is it working as a team?

It’s a pretty different world once you are onstage and you have to work as a team. No character is considered small or big and everyone has to be equally good in his or her own respective parts. I liked the bonds that we ended up forming as a team and giving our best as a unified one. Obviously, there are times when everyone gets nervous but there are more instances when everyone is supportive of one another because they understand what the other person is going through.

What has been the most difficult aspect of theater?

For me, memorizing dialogues was never all that difficult. It was rather the acting while delivering the dialogues that was the tricky bit. We had a very talented director who used be very particular about his ideas and would make us rehearse the entire play over and over again if even one scene had not been performed properly.

Tell us about your proudest moment as an actor? Will you continue to be involved n theater?

My proudest moment so far has been the moment we finished a show of Aladdin and received a standing ovation. I was presented with a special spotlight for being the only one in the play to dance and also act it out, which I think has been my greatest achievement so far. From the very first day of school, I’d wished to act and sing in our school play and it came true with a lot of hard work and support of my teachers and peers. Although I do love acting, my aim is to pursue a career in the medical field. But if I get good roles, you will definitely see me on stage.

KATHMANDU, May 27: The Second Kathmandu Aksharaa International Children’s Theater Festival 2018 had its opening ceremony on Saturday on the premises... Read More...

From acting to producing: Transformation of female actors

Traditionally, there is lower involvement of women in the film industry, especially in senior positions such as directors or producers.... Read More...