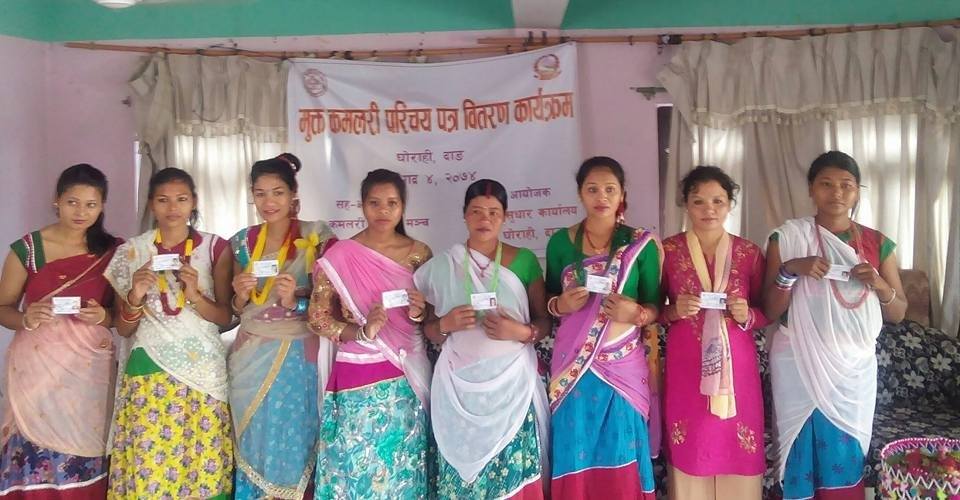 KATHMANDU, August 21: Members of the Kamlari community, who were once bonded laborers, are finally getting their identity cards after four long years of struggles and protests to get their identity.

The initiation was started by Minister for Land Reforms Gopal Dahit by distributing ID cards to eight Kamalaris of Ghorahi in Dang district. He pledged to distribute ID cards to 13,000 more Kamalaris within four months.

On June 7, 2013, a 10-point agreement was reached between the government of Nepal and the Kamalaris. The seventh point of the agreement mentioned about the distribution of ID cards to the Kamalaris. Minister Dahit said they are implementing the same agreement.

He had formed the Kamalari Commission for the same purpose, through which 13,000 Kamalris of Dang, Banke, Surkhet, Bardiya, Kailali, and Kanchanpur would receive their ID cards.

“The ID cards have given them their identity. I observed keen happiness in the face of Kamalaris upon getting their IDs,” Dahit told Republica in a telephone interview.
One of those who received ID card from Minister Dahit was Urmila Chaudhary, who had spent years working as a bonded laborer before finally being freed. Upon getting freedom, she had joined the cause of the Kamalaris.

“The government had agreed to immediately distribute ID cards to Kamalaris four years ago. In the duration, governments and ministers changed many times but none of them were serious about our demands,” said Urmila.

“Minister Dahit took the initiation himself and also requested other departments of the government to be serious toward our demands, which finally made the ID card distribution possible.”

Urmila had sustained injury in 2013 while protesting for the demands of the Kamalaris. She said she has not forgotten the wounds she received in the protest.

“We organized many protests and campaigns. We also submitted separate memorandum to all the concerned authorities. All these bodies were capable of fulfilling our demands.”
Another Kamalari activist Manjita Chaudhary said she is happy to some extent after receiving the ID card.

“However, our true demands haven’t been met and we are yet to get the promised facilities. Our demands were for the distribution of ID cards while providing us certain facilities at the same time. What is the use of ID card if the government refuses to provide us the facilities we are entitled to?” she questioned.

“Based on the ID cards, Kamalaris would be provided with scholarships, jobs and skill development trainings.”

The Kamalari campaign was started only a year before the government declared the Kamalaris as freed people. As they had suffered years of suppression, activists had demanded government programs and facilities to integrate the Kamalaris in the society.
Lately, many Kamalaris have been involved in entrepreneurship.

They have raised Rs 40 million through their own corporation and used the money for trade and business.

However, the Kamalari activists say their key demands have been ignored by the government.

KATHMANDU, Nov 24: Distribution of voter identity cards is beginning from today for the first phase election of House of... Read More...

KATHMANDU, June 24: As part of its final preparations to conduct the second round of elections, the Election Commission (EC) is... Read More...

KATHMANDU, April 7: The Election Commission (EC) has decided to complete the distribution of voting ID cards before May 10, three... Read More...