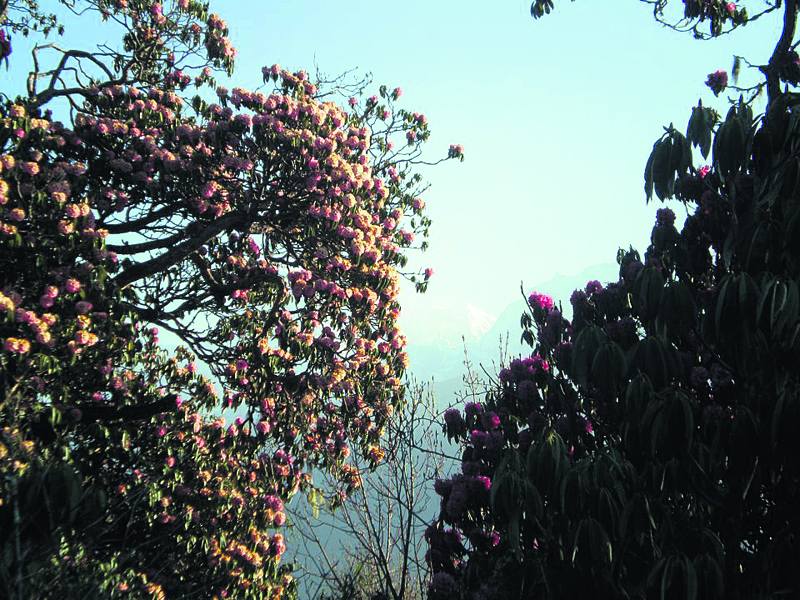 Rhododendron forests along the Ghorepani-Ghandruk trail in this file photo.

BABIYACHAUR (Myagdi), Jan 12:  The number of foreign tourists visiting Ghodepani-Ghandruk area of world famous Annapurna Circuit, a main tourist destination, has increased by 31 percent this year as compared to the previous year.

Ananda Subedi, administration assistant at the ACAP Office, said the areas where the number of tourists visited include Ghodepani, Ghandruk, Annapurna Base Camp and Khopra area, the main tourist destinations.

Although the initial period following the earthquake of April 25, 2015 saw a slight fall in the number of tourists visiting the areas, the recent period was encouraging, said Bidur Kuikel, chief of the ACAP, Ghandruk.

Ghodepani Ghandruk trekking route is famous for art, culture, lifestyle of Magar and Gurung settlements. Besides, one can view panorama around the areas and scenes of various mountains and sunrise from the site.

Each citizen of SAARC countries is charged Rs 200 to visit ACAP while the entry fee for people from other foreign countries is Rs 2,000 each. RSS

ILAM, Aug 20:  The number of tourists visiting the eastern hilly district of Ilam has increased by 42.6 percent in the last... Read More...