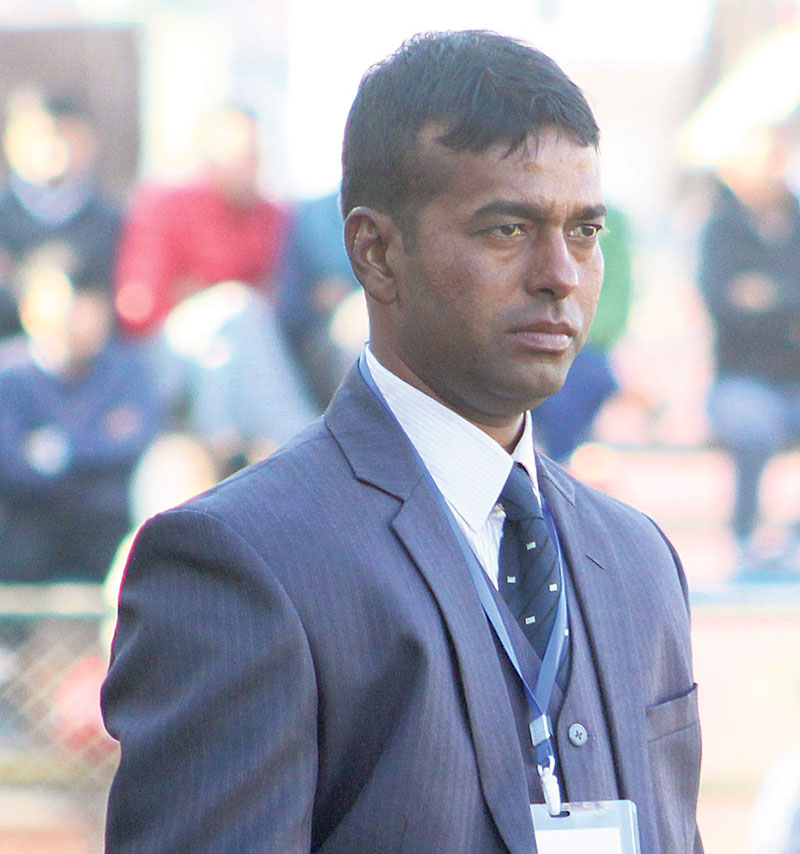 KATHMANDU, Jan 11: National women's football team coach Kumar Thapa believes that there are lots of positives to be taken from the team's participation in the SAFF Women's Championship despite the team's failure to reach the final for the first time in its fourth appearance.

He attributes the failure as the worst outcome for Nepal in the regional tournament. “Making judgments on the basis of outcome, the women football has fallen a step down and I take the responsibility for the semifinal exit,” said Thapa in a recent conversation. However, Thapa was overwhelmed by the positive aspects of the team.

“There are many positives from this tournament on which we need to build our future,” added Thapa. “Seven new young faces not only made a place in the team, but all 20 players of the squad played in the championship. They have improved in both technical and tactical aspects,” Thapa pointed out the positives.

Nepal faced semifinal exit for the first time in SAFF Women's Championship history going down 3-1 against host India in Siliguri last week.  In all previous three editions too, it was India which beat Nepal in the finals.

“Players have adapted to more passing game rather than long passes. They have developed ball-friendly attitude in training and are now more comfortable with the ball,” said Thapa. “The concept that defending is just about clearing the ball from your box is irrelevant. Now, they can defend as a team and attack as a team. These are the small changes I have witnessed, but they can't be underestimated. They are important ingredients of developing skills and beautiful style of play.”

Nepal's campaign got flying start with 8-0 win over Bhutan and 9-0 over the Maldives in the first two matches of the group stage. Nepal failed to give continuity to the momentum against Sri Lanka relaying on an own goal for a 1-0 win.

Sabitra Bhandari, who had scored 11 goals in the first two matches, couldn't score in the last group match and failed to produce goal in the semifinal against India. None of the Nepali forwards except Sabitra notched more than one goal in the championship and the prolific striker was under tight marking by opponent players during encounters with Sri Lanka and India.

“I don't think we were over dependent on Sabitra because you can't overlook the contribution of other players who created momentum for her to score,” said Thapa. “I don't think they faced psychological pressure. There were other plenty of reasons behind that loss.”

He also pointed out the biased decisions of the referee affecting the outcome of the match against India. “We had planned not to concede until the 80th minute. I had instructed for possession play and planned not to allow space for opponent team until then,” said Thapa. “The plan was to score in the remaining 10 minutes but unfair decision of the referee hampered in execution of the game plan.”

He also pointed out failure to execute plan B after Sabitra was marked tightly as the other reason of defeat. “I knew Sabitra would be marked tightly after scoring 11 goals in the first two matches. So I had made tactical plan to overcome that potential threat,” he further added. “So I had told Sabitra to drop deep and one among Sharmila Thapa and Anita Basnet play in her position. But the players couldn't execute that plan effectively. As a result, we couldn't produce goals from open play against Sri Lanka and India.”

He also attributed that his team couldn't cope with the Indian strategy in the final match.

“India came up with plan of playing long balls due to physical superiority and they were successful in their plan.”

Thapa, who has received green signal to continue as head coach of the team until another edition of the championship to be held in Nepal, was hopeful of winning the title but he has some plans which need implementation.

“We have very talented group of players but the current domestic structure is not enough to groom them. There should be league and enough tournaments,” said Thapa.

He also said that Nepal must target to reach bigger level than SAFF and do the homework accordingly.  “ANFA has good relation with Japan Football Association (JFA).

Utilizing that relation, we need to send our players to play there or invite Japanese teams to play here. The Japanese team is on next level but we can play with their youth teams and university teams which will be very fruitful,” suggested Thapa.

“If not Japan, we can play with other nations as well but frequent matches against stronger teams are essential,” added Thapa.