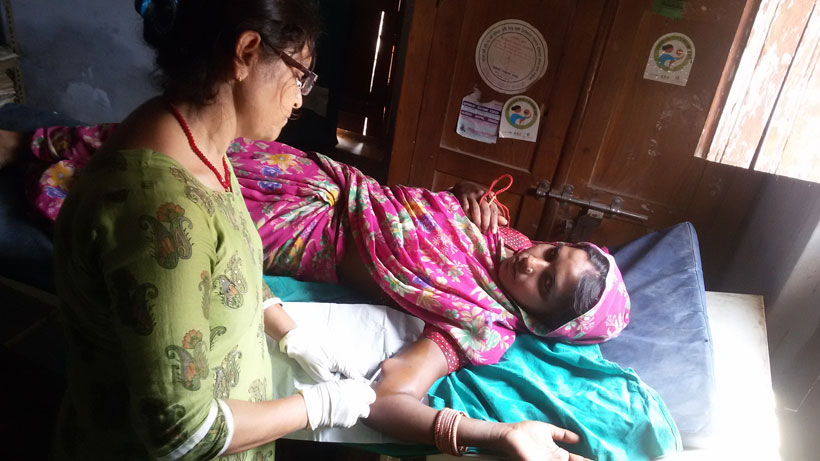 While Nepal has made noteworthy progress in increasing contraceptive prevalence rate (CPR), it’s clear that there are still various factors that are stopping its usage from being widespread.

Januka Poudel, 32, couldn’t be more pleased at not being able to recall all her patients’ names. Apparently, there was a time when she could have counted them on the fingers of her hands. However, in the decade that she has been working in the reproductive health service sector, Poudel has witnessed a significant spike in the awareness level of the communities of her district, Sarlahi. A little more than half of the households she counsels actively use family planning methods and being a local, Poudel considers this a major shift in the attitudes.

But still, despite the positive development, the fact remains that not everybody is convinced. Poudel informs that a remarkable number of people in the VDCs that she works in still don’t see the point of contraceptives. Thus, there are still instances, when she is forced to work in cloak-and-dagger fashion.

In fact, the last time she had to treat a patient in secret wasn’t so long ago. It was right after the Chhath celebrations when she was informed that she would have to urgently travel to Sasapur. The reason was a woman who wanted contraceptive implants. However, since her in-laws and husband were against it, the woman had secretly escaped to her parent’s house to arrange the appointment.

Poudel says she immediately took a car and traveled for an hour and half to attend to the patient because, in her experience, if the opportunity was missed the woman would probably never get another chance again.

While reports like the National Demographic Health Survey shows that Nepal has made noteworthy progress in increasing contraceptive prevalence rate (CPR) for modern contraception among married women from 35 percent in 2001 to 43 percent in 2011, it’s clear that there are still various factors that are stopping its usage from being widespread across the country. United Nations Population Fund’s (UNFPA) Country Representative for Nepal, Giulia Vallese, also agrees that despite the general improvement in CPR, there are indeed “pockets in each district where the concept of family planning needs to catch on”.

Working on the field, Reproductive and Sexual Health technical officer, Hari Prasad Bhusal, has had firsthand exposure to the elements affecting access to family planning services. Further, unlike the case of Poudel’s patient, the hindering factor isn’t only one of social and cultural beliefs. According to him, there are numerous aspects ranging from availability and capacity of service providers, availability of supplies to sometimes even accessibility of health facilities.

Bhusal cites the example of his recent 2016 trip to the remote village of Musahar, Mahottari. According to reports published by the District Health Office, with just 11 percent CPR, Musahar was named one of the places with the least number of family planning service users in the country. It was also the reason Bhusal and his team were visiting the marginalized community of the area with their satellite clinic program.

He shares that the very first day of the program alone saw a turnout of 23 percent. They discovered that their target group, i.e. Dalit women and families of the area, weren’t against the idea of using contraception. The real problem was the lack of services. Some of the women in Musahar apparently also revealed that they had actually given up hope of getting access to family planning means in their lifetime. Bhusal calls it an important lesson.

“I can guarantee that two out of three times people will opt for family planning. Whenever we counsel people, they generally share concerns of accessibility, costs, side effects or issues of comfort while wearing contraceptives. If we were to accommodate all of their worries and make sure that everybody across the country got the required services in a professional manner, we would have more Nepalis jumping on the family planning bandwagon,” says Bhusal.

Gautam explains that sometimes even though some women don’t want more children or they know that it is advised to have at least two years gap between two pregnancies, they fail to adopt family planning measures because they simply don’t have the time to travel the distance to their local health posts time and again.

So the fact that they could vaccinate their babies and get contraceptive implants or injections at the same time saved the extra hassle for many of them and also promoted family planning in the area. To his knowledge, Bajhang is the only place where this initiative has been carried out. Gautam believes if more collaborations like these were to take place, it would benefit many families.

Further, in his experience, rather than interaction and orientation programs organized by the private sector or the government, the community itself has proven to be the better advocate for encouraging family planning.

“When someone using certain contraceptive shares her positive experience with her friend or in her relatives circle, it has more of an impact than when an authority speaks. We plan to organize more events where couples, families, or youngsters can interact with one another on issues of family planning,” says Gautam.

Bhusal too is a staunch supporter of getting his allocated area’s community involved in the family planning agenda. As an example he talks about the mobilization of religious leaders in Rautahat. Kushum Lata Shrestha, a health service worker of the district, shares how she and her team frequently encounter difficulties in convincing members from the Muslim community to adopt family planning means.

As Shrestha puts it, “They often cite their religious beliefs or need for at least two sons in the family to denounce the need for contraceptives. Even when we try and explain that the means can be reversed when they wish to have more children, it doesn’t work.” Some women from this community too tend to seek treatment in secret and Shrestha worries that they haven’t been able to reach this population at large.

In cases like these, Bhusal agrees that the best way to approach them is through community leaders. In this particular Rautahat’s Muslim community, it was the Mullah.

The UNFPA reportedly arranged an exposure as well as orientation program for a couple of Mullahs to Indonesia in 2015 and then 2016 respectively. It apparently took the organization more than a year to convince them to participate in this program and they eventually did go. Post the program, the Mullahs were convinced about the benefits of family planning and upon their return they actually agreed to help spread the word among their followers. Bhusal considers this to be a massive headway in the quest to increase access to quality family planning services and believes the only way from here on is forwards.

DHADING, Sept 12: As many as 31 passengers were injured when a bus en route to Nawalparasi from Kathmandu fell... Read More...

China approves law to tighten control on internet use