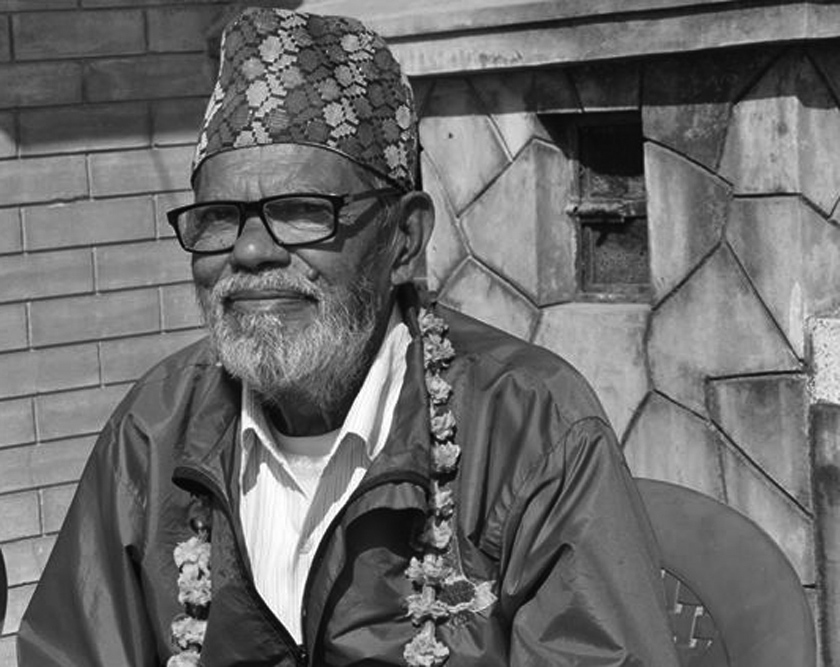 This was the last line of dialogue uttered by veteran actor Bishnu Bhakta Phuyal, who died at the age of 79 Tuesday evening after collapsing on stage. The play in progress  was Maharshi Yagyabalkya, at Rastriya Nachghar, Jamal.

It was written by Satya Mohan Joshi and directed by Badri Adhikari.

According to fellow-member of the cast Bimba Adhikari, Phuyal was doing the role of King Janak of Mithila. He collapsed in the second scene, in which a royal meeting was taking place.

“He appeared to be feeling uncomfortable by the second scene. As we approached the end of the scene, he collapsed on stage and we rushed him to hospital,” informed Adhikari.

Bir Hospital pronounced Phuyal dead even as he was undergoing treatment.
“He was unconscious when he was brought to the hospital. He had suffered a stroke. Doctors started all necessary treatment but he died of multiple organ failure,” said Dr Bhupendra Kumar Basnet, director at Bir.

Phuyal, who had been living at local Mahankal - Panitanki, was a popular figure in  Nepali theater, television and film. He gained popularity in plays like Ghanachakkar, Oedipus Rex, Nyaya Premi, Bagbhairav and Chudiyeka Samjhanaharu, and in TV serials like Abiral Bagdachha Indrawati, Tito-Satya and many more.

“He was a very fine artist but more than that he was a good human being, and he inspired younger generations to strive hard,” said director Sunil Pokharel, who has worked with Phuyal in a number of plays.

Actor Maniram Pokharel said Phuyal were so attached to the theater that he used to say he wanted to die on stage.

“I worked with him in Ghanachakkar directed by Pokharel. He used to scold rookies like us if sometimes our efforts slackened,” said artist Maniram Pokharel.

Besides acting, Phuyal was also active in trade unions. According to CPN-UML leader Bishnu Rimal, Phuyal was a true trade union leader. “He served in the Nepali trade union movement not only as a people’s artist but also as a leader. He was a member of a GEFONT sister wing till the last,” said Rimal.

Phuyal is survived by three sons. According to Maniram Pokharel, his body will be kept at the Nepal Academy, Kamaladi from 11 am to 2 pm Wednesday, before the last rites are performed.

KATHMANDU, Dec 4: Veteran bollywood actor Shashi Kapoor has passed away in Mumbai on Monday. He was 79. ... Read More...