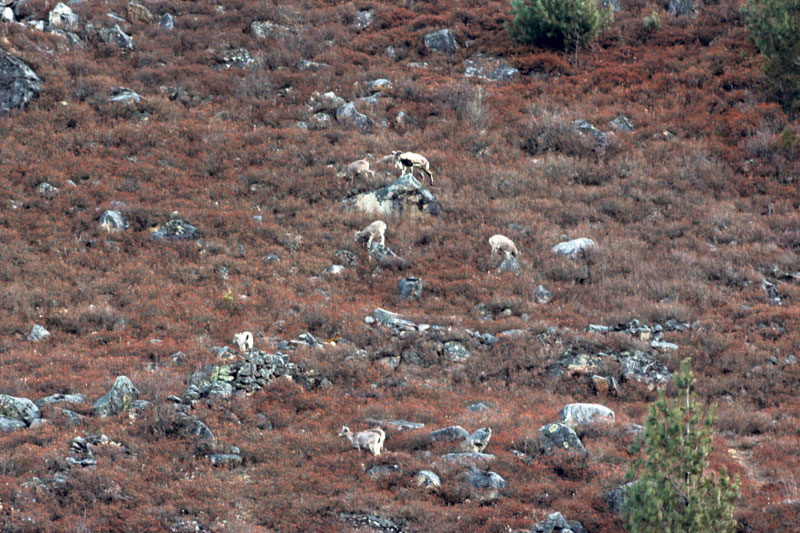 A herd of naur grazes in the meadows of Mugu VDC, Mugu in this recent picture. Due to unrestrained poaching in the district, naur herds have become rare, locals complain. Photo: Suman Malla/Republica

MUGU, Jan 2: Villages in the eastern part of Mugu district are considered rich in wildlife. However, of late, wildlife population, especially that of deer and tiger, is fast declining. Locals put the blame on poachers and lack of adequate security measures along the border.

“Some years back, we used to come across herds of goral, himalayan tahr, tahr, naur and musk dear in the meadows and jungles. Tigers could also be spotted in jungle. But nowadays you rarely come across any of them. Their population is steadily declining,” Karma Wanjuk Lama, a resident of Kinri VDC, said. “Poaching is rampant around here.

Poachers hunt these animals for various purposes. And local authorities have failed to control their slaughter.”

Some of these species are already on the verge of extinction, Lama said on the basis of the rarity of their encounters in the area. “I have not seen musk deer for some years now.

It seems they have been all hunted down by poachers,” he said. “The same is with tigers. I have not heard any villagers spotting a tiger in the area for many years.”

Locals informed that poachers sell parts of these animals in Tibet at huge price. Tibet is around a day’s journey from the area and the border in the region has sparse security allowing poachers to smuggle their hunt across the border conveniently. While government has failed to show its presence in the area, poachers have, over the years, improved their capacity and skills. “They are not only well prepared but have also invested massively in hunting and communication gears. This is a big racket and over the years poachers have considerably honed their hunting and smuggling skills,” said Lama.

Lama says that police have not been successful in bringing poachers and smugglers to the book, despite some success. “Two years ago, three Mugu businessmen were arrested for possessing parts of endangered species. But they were arrested by the Tibetan police, not ours. And we heard that these persons were released by the authorities after they had paid fine equivalent to the items they possessed,” he said questioning the impact of police action - on both sides of the border. He said that Nepal Police has to take more concentrated and result-oriented intervention to tackle the rampant poaching in the area.

One of the major reasons for the unrestricted smuggling across the border is the lack of permanent check post and custom office in Mugu. Even in permanent check posts, there is lack of security personnel to patrol the border. “There is dearth of security along the border which is further hindered by the difficult topography. Because of these, poachers and traders easily smuggle animal parts into Tibet,” Lama remarked.

According to locals, poachers spend days and nights in jungle tracking their victims.

Mostly they erect machan near river, bridges and isolated corners and spend weeks, months for hunting. Once they are able to hunt an animal, they use mules to transport at night.

“All the locals know this. Sometimes even locals themselves are involved. But due to lack of presence of security, the wrong doers do not fear anyone. We are not happy with the way animals are being hunted down from their natural habitat,” says Lama.

Poachers are active basically in forest area that falls between Pulu, Kimri and Dolphu VDCs, locals reported.  In Karaan hotels are mushrooming and these hotels’ major attraction is the meat of wild animals. “Most of the hotels in Karaan sell meat of poached wild animals. But the hoteliers sell it claiming it to be Chauri meat,” a resident from Karaan said, requesting anonymity. “It is risky to involve yourself in such matters or inform it to police. Everyone knows what is happening here but everyone remains mute to avoid trouble,” the source said.

“Hoteliers put up good price for wild animal meat. This prompts even locals to poach wild animals. And sometimes these good price attract hunters from other districts as well,” he said adding that a deer’s leg fetches between Rs 2500 to Rs 3500 for the hunter. And the price varies largely if the meat is dried, he informed.

Though awareness among locals for conserving wildlife is gradually increasing, and though they support such efforts, they themselves have been assisting the poachers, directly or indirectly, he added.

ROLPA, May 12: Even though the number of child marriages is extensively high in Rolpa, very few cases of this... Read More...

TIKAPUR, Jan 14: Increasing rate of sickle-cell disease among the members of the Tharu community has become a great health threat... Read More...

India to resume export of Covishield vaccines from next month, neighboring countries to get first priority
10 hours ago