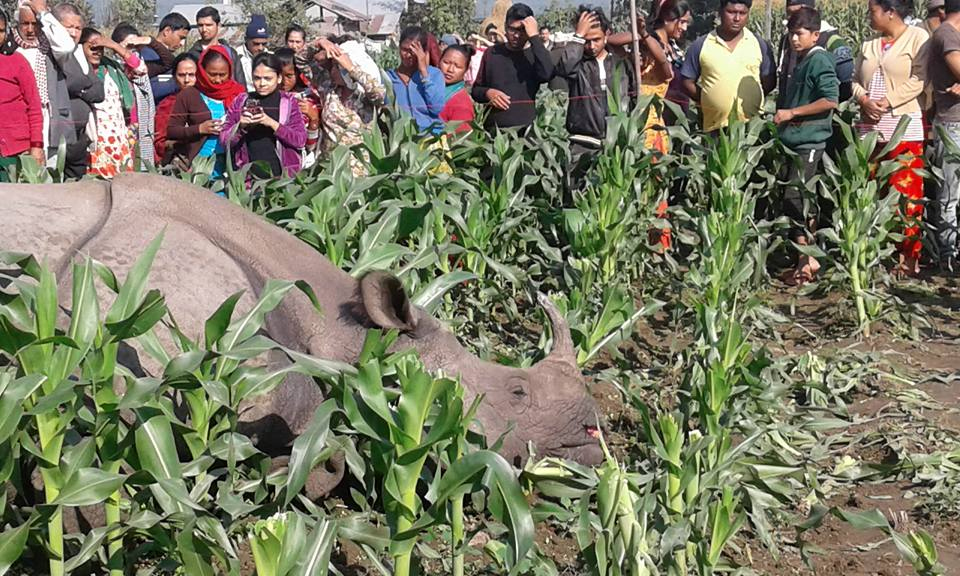 CHITWAN, Jan 3: A female one-horned rhino, estimated to be 12 years old, was found dead at a maize field in Gaidakot Municipality-7 of Nawalparasi district on Monday.

Although the cause of the death is still uncertain, authorities informed that the rhino was most likely electrocuted. “We are not in a position to say that the rhino was targeted by poachers. It is likely that it died after being electrocuted,” said Ram Chandra Kandel, chief conservation officer at Chitwan National Park (CNP).

Poachers may not have had their hand behind the killing since the rhino’s toes and the horns are intact, stated CNP officials.

Traces of foam could be noticed coming out of the mouth of the dead rhino.

“Preliminary investigation shows that the rhino died of electrocution. The maize field must have been protected using current to prevent rhinos damaging crops,” Kandel added.

Many locals fence their farms with live wires to protect their farms. And this has lead to death of endangered animals numerous times.
Just about four months ago in August, a rhino was found dead within CNP’s premises near Meghauli Serai Hotel operated by Chaudhary Group. During the incident, it was said that the hotel had set up live wire fence for construction purpose, but forgot to turn it off after the work was completed, leading to the unfortunate incident.

Rhinos are an endangered species. Poachers kill rhinos for their valuable horns. There are laws to protect the endangered species with provision of 5 to 15 years of jail sentence along with a fine of Rs 50,000 to 100,000 or both if any person is found guilty of killing a rhino.

The horns of one-horned rhinos, which are native to some areas of the Tarai, fetch huge prices in the international market. Although there has not been any report of poaching in the past two years, the park has reported several rhino deaths either due to natural causes or accidents, including ‘electrocution by live wires meant for security purpose’.
CNP has the highest number of one-horned rhinos in the country. Thousands of tourists from all around the world throng the park to observe the endangered one-horned rhinos.

RAUTAHAT, Aug 20: A rhino has been found with eight bullet injuries in a jungle near Chure in the district... Read More...

Residents of Nabhi, Gunji and Kuti used to pay land revenue to Nepal until 2035 BS
22 hours ago

Unlocking the lockdown
23 hours ago

LIVE: Meeting of House of Representatives underway
1 hour ago